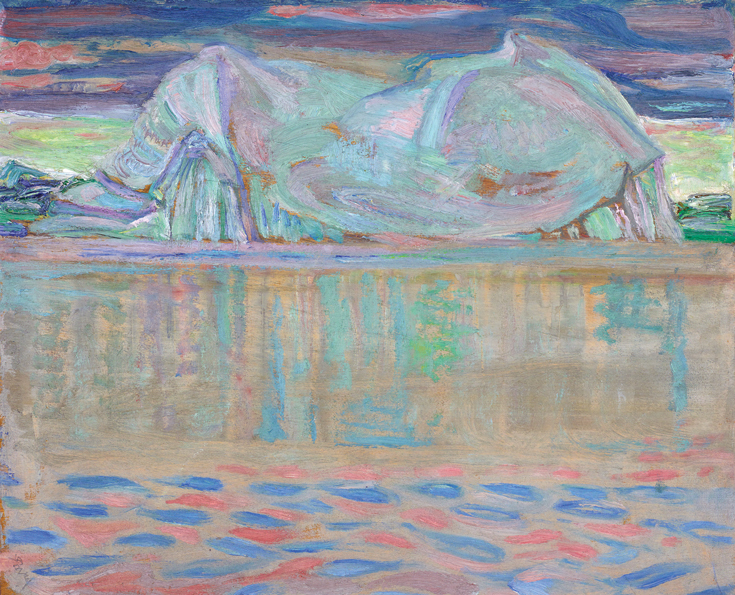 The Group of Seven’s first exhibition was a bit of a disappointment. It was May 1920, and the founding seven artists—Franklin Carmichael, Lawren Harris, A. Y. Jackson, Frank Johnston, Arthur Lismer, J. E. H. MacDonald, and Frederick Varley—had booked Toronto’s then fledgling Art Gallery of Ontario to share their work. After the nearly three-week run, only five of the 121 works were sold. And, when the reviews came in, some were critical. Compared to the traditional European styles that dominated at the time—think John Constable’s romantic landscapes or the gauzy realism of Jean-Baptiste-Camille Corot and Jean-François Millet—the group’s bold takes on the northern landscape provoked strong reaction. “Are these new Canadian painters crazy?” asked a headline in the Canadian Courier, preceding much of the derision that the group would later receive over its thirteen-year-run.

One hundred and one years later, the Group of Seven may comprise the most popular artists in this country’s history (matched only by their close associate Tom Thomson, who disappeared during a canoe trip before the group officially formed). Their landscapes are not just rooted in the national canon; at times, they feel like they define the canon. The artists have been the subject of blockbuster exhibitions, books, documentaries, and at least one rock album (The Rheostatics’ 1995 Music Inspired by the Group of Seven). In the private market, Harris’s Mountain Forms is the most expensive work ever sold by a Canadian at auction, going for more than $11 million in 2016. The National Gallery of Canada, the Art Gallery of Ontario, and the McMichael Canadian Art Collection have entire wings dedicated to the group, each with associated gift shops featuring postcards, calendars, wall prints, and coffee table books.

It’s easy to understand the continued popularity: the group defined how innumerable Canadians have perceived this country. Harris’s signature mystical icebergs and winter suns capture feelings that photographs rarely can. In North Shore, Lake Superior, his clouds are so solid it’s easy to mistake them for mountains; the sun streaks down on a lone tree stump in unreal opacity. MacDonald took a more organic approach to nature and had the uncanny ability to translate into thick paint the saturated colours of autumn with each stroke. Jackson, meanwhile, often worked with an almost monochromatic palette, capturing how light can imbue the northern landscape with various hues: in Early Spring, Emileville, Quebec, a shadow of purple interrupts the oranges and whites like a bruise. 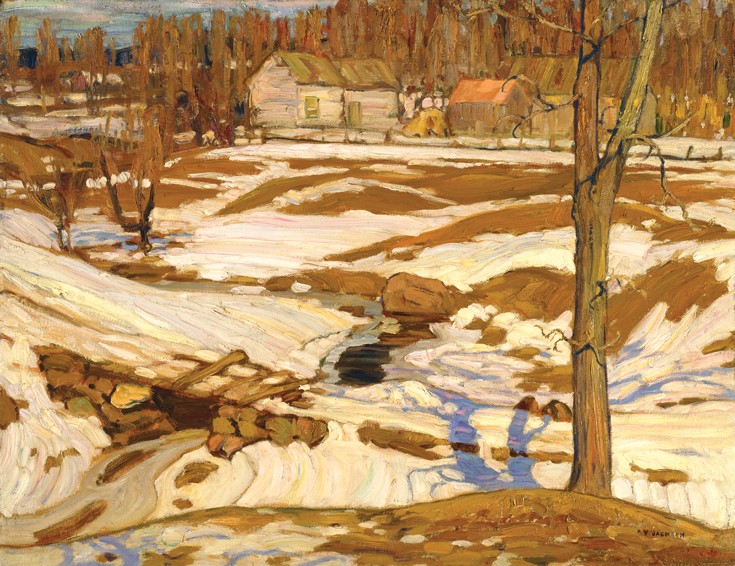 The Group of Seven’s centennial, last year, may have been partly muted by the many COVID-19 closures, but there was still plenty of celebration. There were articles and essays, and forty-five minutes outside of Toronto, in Kleinburg, the McMichael is hosting a massive exhibition, featuring more than 280 works, until November. The McMichael’s executive director, Ian A. C. Dejardin, also recently published A Like Vision, a hefty compendium to the show that compiles images along with essays by artists, scholars, and musicians, who all muse on their personal relationships with the group.

A Like Vision is a surprising text: coming from the McMichael, an institution created in the 1960s with the mandate of championing the Group of Seven, the book, though still largely laudatory, also deconstructs the myths that have grown around the artists over the decades, examining how and why this particular smattering of men came to dominate our collective imagination and embody Canadian identity. Talented as the Group of Seven’s members were, their cultural capital did not come about entirely through word of mouth or the sheer force of their genius. Rather, these few artists were chosen by a handful of institutional leaders and rose on a relentless PR campaign mixed with some rather calculated self-promotion. They were made on a level of support that no other artists, before or since, have ever received.

The Group of Seven’s success is, in many ways, a story about reproduction. From the late ’20s on, certain members—Lismer and Jackson in particular—worked closely with the National Gallery of Canada to move their art beyond galleries and into the public’s everyday life.

This populist appeal was possible thanks to a new national program that sold inexpensive silkscreen prints to government buildings and the public, a strategy designed to educate the nascent country on the burgeoning Canadian art movement. As visual arts academic Joyce Zemans describes in her definitive 1995 research paper “Establishing the Canon,” this series was created to elevate and support homegrown artists alongside their European peers. Tasked with selecting the artists was staunch Group of Seven ally Eric Brown, director of Ottawa’s then young National Gallery. Also involved was Lismer himself, who selected the images and wrote the associated study guides. Perhaps unsurprisingly, Lismer and his colleagues became the focal point of the series and benefited most when hundreds of thousands of prints flooded into schools, libraries, and homes.

“The selection of work for the Canadian series was as remarkable for what it excluded as for what it included,” Zemans writes. There were no artists from the Prairies. None from the east or west coasts. Emily Carr was omitted—as was every other woman painter. So too were Indigenous artists and even art that depicted Indigenous people. Rather, the selected works focused on pristine, empty wilderness, untamed by industry and untainted by people—an aesthetic with the Group of Seven as its epitome. “It influenced the entire country’s idea of what was Canadian about Canadian art,” Zemans writes. It also positioned Tom Thomson and the Group of Seven “at the apex of Canadian artistic achievement.”

The print series was expanded during the Second World War to help promote nationalism. This time, it was Jackson leading the charge, working alongside the National Gallery of Canada to create a similar series of reproductions for army bases, at home and abroad, in a bid to raise troop morale. Once again, about one-fifth of selected works were by Thomson and the Group of Seven.

These reproductions became a regular part of public life over the following decades. “Tom Thomson’s paintings The Jack Pine and The West Wind were an inescapable part of growing up in Canada in the 1950s and ’60s, displayed as they were in every classroom, every bank,” writes singer Bruce Cockburn in A Like Vision. In another essay, Jayne Wilkinson, of Canadian Art, writes about how these prints found their way into childhood memories and describes inheriting a coveted J. E. H. MacDonald reproduction after the death of her grandmother. 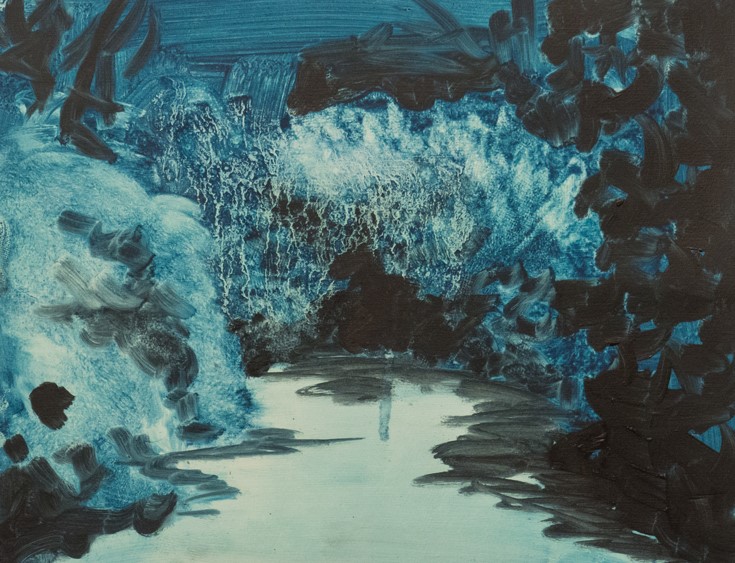 For generations, the Group of Seven was ubiquitous. But dissent over its prominence was also present. And, to its credit, A Like Vision allows its contributors to air some of their discontent. An essay by jewellery and textile designer Tarralik Duffy is notable in its honesty: “My first reflection on seeing Varley’s Iceberg was, Am I allowed to think this is ugly?” Others articulate their unease with the way the group’s works have upheld colonial values. Wilkinson, for example, criticizes MacDonald’s painting of British Columbia’s Lake O’Hara for making the land appear unpopulated even though it was the traditional territory of the Ktunaxa people. As she writes: “This painting thus offers us a fantasy.”

That fantasy is something that also bothers Bonnie Devine, founding chair of OCAD University’s Indigenous Visual Culture Program. In her own essay, she examines how these settlers’ perspectives of the North were inadequate in capturing the land because they lacked a fundamental understanding of it. “So go ahead, Painter,” she writes. “Try to uncoil the bulky length of Pic Island. She will twist away and gather herself elsewhere like a drift of heavy snow just out of your reach.”

But it’s not just the content of their work that must be grappled with. After 101 years of reproducing the Group of Seven’s art to the point of saturation, it feels like the time has come to give other, contemporary voices the same opportunities. It’s not enough to mount gallery shows with diverse rosters—perhaps a new reproduction program, like the national series that first catapulted the Group of Seven to the masses, is needed. One that gives access for anyone who wants it, encompassing the many talented artists who reflect the lived reality of Canadians. What would it look like to see prints of Inuk artist Mark Igloliorte’s Islands in our banks, its deep-red canvas—the same hue as the ore from Labrador’s mines—overlaid with fractures that mimic a topo-graphical map? Or what about the lush, sanctuary-like landscapes from Nigerian-born, Toronto-based Emmanuel Osahor hanging in classrooms from coast to coast to coast? The fading tableaux of Inuvialuk/Gwich’in artist Darcie Bernhardt, which beautifully reflect the nature of memory, should garner the same reach.

It’s no longer the shadow of Corot, Constable, and Millet that contemporary painters must escape but that of a cluster of modernists who started out wanting to upend the pantheon and, in the end, only replaced it. The Group of Seven has admirably done its part in bridging Canadian art from traditionalism to disruption. But, a century later, it’s time to pivot once again: a new zeitgeist must form.