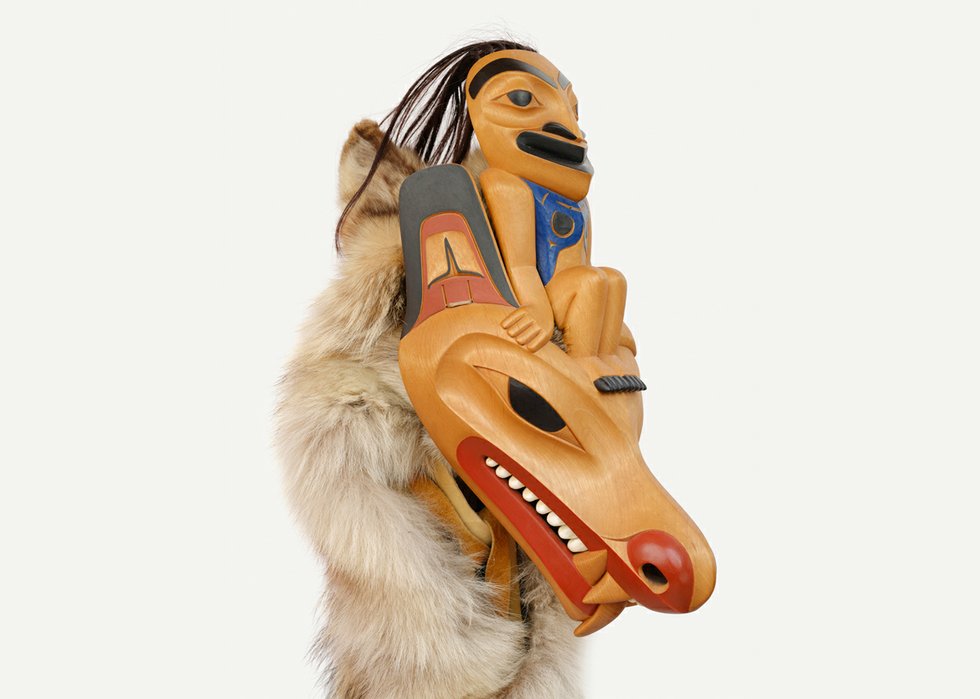 For Dempsey Bob, wolves are a source of fascination. He doesn’t see them often – unless they want to be seen, he says – but they are strong and smart. They enjoy their freedom but are bound by love for their pups and the pack, and work together as a team. He has dreamed of them and has watched them watching him.

Over the years, Bob, a carver of Tahltan and Tlingit descent, has made stunning masks that display lupine aspects – the long nose, gleaming white teeth and sharply focused eyes. His Wolf Headdress, for instance, a striking work carved from alder in the late 1980s, features a small human figure perched between the wolf’s alert ears. It’s like the guy is riding shotgun, with dark-toed feet forming a fringe on the wolf’s forehead, long black hair drifting out behind, and a broad smile that suggests the journey is congenial. 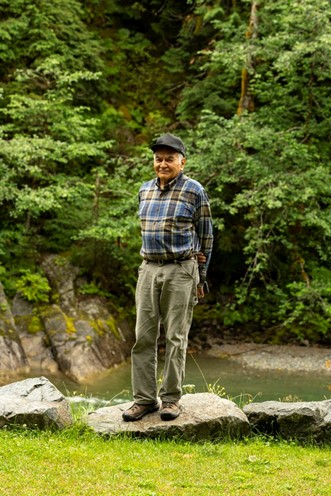 Bob admires the beauty of wolves on the move, and the lines of their faces. “When I carve I try to stylize it – what I see and also what I think of them, to bring that together,” he says. “I try to get those beautiful lines that are flowing, that are moving. In the eyes, I see the intelligence, the strength too.”

Bob, now in his mid-70s, has spent a lifetime carving, supporting himself by his art and getting some accolades, but is less widely known than Haida artist Robert Davidson. Now, however, a major touring exhibition organized by Curtis Collins, director and chief curator of the Audain Art Museum in Whistler, B.C., and Sarah Milroy, chief curator of the McMichael Canadian Art Collection near Toronto, is showering Bob with a whale-splash of attention.

Bob’s affection for wolves runs so deep that he named the show in the animal’s honour: Wolves: The Art of Dempsey Bob. It premiered in April at the Audain with more than 100 works, including masks, sculptures and ceremonial garb. A smaller touring show with some 60 works is on view until Nov. 20 in Calgary at the Glenbow’s temporary digs in the Edison Building, as the museum is undergoing major renovations. It opens Dec. 10 at the McMichael and then moves on to the Montreal Museum of Fine Arts before returning to British Columbia for a stop at the Kelowna Art Gallery. 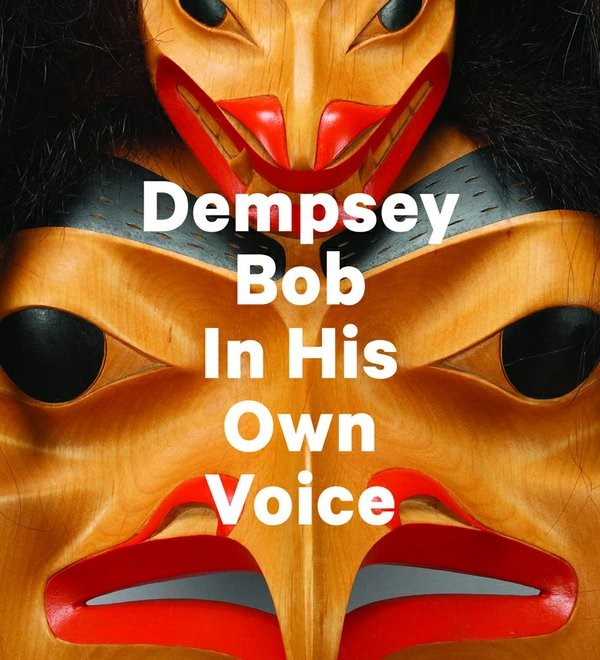 The show is accompanied by a remarkable book, Dempsey Bob: In His Own Voice, that is both glossy and homespun in the best possible ways. Highly visual, it includes pristine documentation of Bob’s gleaming carvings, including Mosquito Mask, Eagle Bear Mask and Northern Eagles Transformation Mask. Those images are interspersed with family snapshots, photos of his travels to Europe, Japan and New Zealand, and short textual passages in Bob’s wise, unassuming and, at times, humorous voice.

An Indigenous perspective is implicit throughout. The centrality of the land, a core facet of Indigenous worldviews, is honoured with beautiful photographs of Kleanza Creek and the Skeena River, printed across two-page spreads at the book’s start and finish. The land thus cradles the book’s other contents – Bob’s stories of family lineages, along with his thoughts about culture, carving and art. He also considers the impact climate change is having on animals and ecosystems, both around Terrace, B.C., where he has lived for the last 15 years, and further afield. To my mind, the only thing missing is a map to help readers navigate the northern territory in which Bob’s life has unfolded.

Bob opens his story by explaining that clans and traditional names and songs come from the mother’s side of the family. “I am Wolf, because my mother was a Wolf,” he writes. His father was a Raven. A black-and-white photo shows his maternal great-great-grandfather, Étmatá Sinkoots, a healer who wears a chilkat blanket and other ceremonial clothing, some of it now in the Smithsonian. The family survived the Spanish flu after the First World War because his great-grandfather took them out to their trapline in the mountains near Atlin, B.C. When they returned to their village, so many people had died that they decided to move south to Telegraph Creek, B.C., in Tahltan territory.

Bob was born there in 1948 to Flossie Carlick and Johnnie Bob. His mother, a country music fan, named him for her favourite disc jockey. But the family moved again because children were being forced into residential school at Lower Post, near the Yukon border. “Bad stuff happened there,” Bob says. “It still affects us. We weren’t allowed to speak our language, sing our songs – all that stuff.” 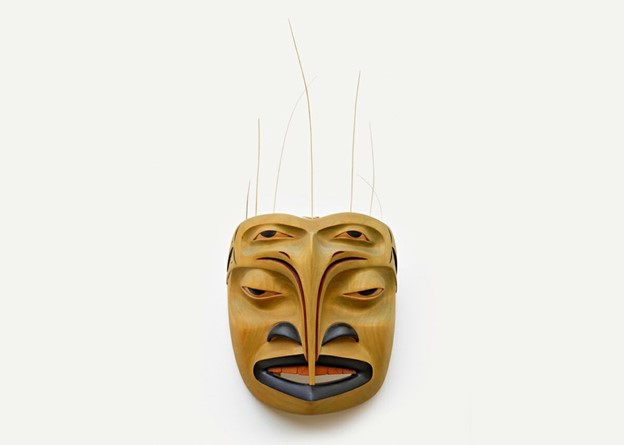 They settled in Port Edward, near Prince Rupert, B.C., where his father had found a job at a fish cannery. Bob recalls playing outdoors as a child. “We always played Cowboys and Indians, and no one wanted to be Indian because they always got killed. And we didn’t even realize we were all Indians! Now when I see those guys I used to play with, I say to them, ‘Remember when we were all cowboys?’”

When Bob was 10, his father died and the family moved to Prince Rupert, where he continued school. He like to draw and read, and his mother supported his art and taught him the stories of her people. But he recalls getting a poor grade from his high school art teacher because “I didn’t draw the way she wanted me to draw.” He told her he would not deny his heritage. “When I got that Order of Canada I thought, ‘that’s pretty good for a C-minus in art.’” Last year, Bob received further recognition, a Governor General’s Award in Visual and Media Arts, one of Canada’s most prestigious honours for artists.

After high school, Bob worked various jobs and met his wife, Margaret, with whom he has a son and daughter. He studied in Prince Rupert with Freda Diesing, a key figure in the resurgence of Northwest Coast art and an important mentor for him. Later, he attended the former Gitanmaax School of Art in Hazelton, B.C., which offered training in carving. He went on to spend time in Alaska, where his people were from, and taught art there, while also learning more about his mother’s culture by studying Tlingit masks and poles.

A couple of significant events helped launch him. Around 1980, Bob was included in the The Legacy, a major touring exhibition organized by the Royal B.C. Museum in Victoria. It led to more opportunities. Another landmark came in 1989 when he had his first solo show at a commercial gallery. The day the show opened in Vancouver, the gallery sold all the work to American businessman George Gund, a major collector. “That was a turning point for me,” says Bob. “It established me.”

These days, his work is in the collections of many institutions in Canada and beyond, including the Smithsonian, the UBC Museum of Anthropology and the Royal British Columbia Museum. Bob works as a senior adviser at the Freda Diesing School of Northwest Coast Art in Terrace, which he helped found some 15 years ago. He enjoys mentoring a new generation, particularly his grandchildren. “Our way is, we don’t push it on them,” he says. “If they don’t want to, we can’t make them. But I try to get them just hanging around me and telling the stories and such. If they’re not exposed to it now, when will they be? But to us, your free will is sacred. My grandparents didn’t push me, but they told me stuff. Eventually I knew I had to do something.”

Dempsey Bob: In His Own Voice, edited by Sarah Milroy: Figure 1 Publishing in collaboration with the Audain Art Museum and the McMichael Canadian Art Collection, 2022.