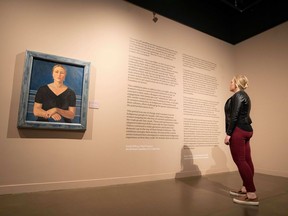 Stephanie Pahl, director of administration and culture at the Glenbow Museum, at the exhibit Uninvited: Canadian Women Artists in the Modern Moment at the Glenbow at the Edison. The painting is Portrait of Mrs. Carl Schaefer (Nee Lillian Evers), 1933 by Yulia Biriukova.

There was a common response from visitors at The McMichael Canadian Art Collection in seeing the exhibition Uninvited: Canadian Women Artists in the Modern Moment in 2021.

The gallery, located in Vaughn north of Toronto, had the show organized so viewers would first come across the work of Montreal artist Anne Savage, who painted vibrant landscapes after the First World War.

“They would turn and look at me and say ‘How do I not know?’ ” she says. “These people were just aghast. We had many visitors coming back two, three, four times just incredulous about how rich this legacy was. We felt like we were filling a vacuum in public knowledge.”

Savage is just one of the female artists represented in Uninvited, which moves to Calgary on Saturday as the first exhibition in Glenbow at The Edison, the museum’s downtown satellite space that will operate while its main buildings undergo a $120-million renovation.

It’s an appropriately bold opener. As an exhibition meant to address past neglect, Uninvited is “a big noisy show” with a “great big point to make,” Milroy says.

The works come from women painters, photographers, sculptors and filmmakers working 100 years ago. It was meant as a response to the gallery’s centenary celebration of the all-male Group of Seven, whose work makes up a large part of the McMichael’s core collection.

“We thought it’s wonderful that we hold all these things at the McMichael but we also need to help the wider public understand what else was happening in Canadian art at that time,” Milroy says. “In particular, the work of women artists. In a way, there was a paradox here because the Group of Seven were some of the most ardent supporters of women in their day and often curated them into exhibitions and created opportunities for them. But the women of the day were never invited to join the Group of Seven and not being invited to join the Group of Seven casts such a long shadow.”

That’s because the narrative built around the popular Group of Seven – seven hardy men who ventured out into the wilderness to paint landscapes – became synonymous with artistic achievement in Canada, Milroy says.

“If the ultimate Canadian artist is a guy in a lumberjack shirt with a paintbox and a billycan slung over his shoulder, then that doesn’t leave a lot of room for women artists to fit into that paradigm,” she says.

This means many of the artists on display in Uninvited – with Emily Carr being a notable exception – faded into obscurity. So gathering the 200 works required a good deal of detective work from curators. Much of the art was still in the hands of the artist’s sentimental family members rather than on display in galleries. Tracking down information on Indigenous artists of the day – the exhibition includes work by Nunavut’s Attatsiaq and Elizabeth Katt Petrant of Bear Island, Temagami First Nation, for instance – was particularly difficult.

“Because of colonialism and systemic racism, many of these objects came to these museums without attribution,” Milroy says. “Often these things were trade goods that went into families and then ended up in museums and it was not considered important who made them.” 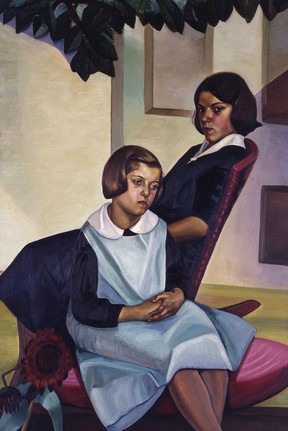 Most of the female artists from this period did not come to their artistic practice through commercial illustration as did their male contemporaries. But many were trained in advanced art academies in Montreal, Toronto, New York, London and Paris. This led to work that showcased a sophisticated knowledge of art history and international trends.

Kathleen Munn, who remained on the periphery of Canada’s art scene during her life, experimented with Cubism and presented the first abstract art show in Canada. Emily Carr was exposed to Fauvism in France. Prudence Heward studied portraiture in the U.K. and Germany and brought those threads back to Montreal, Milroy says.

“People say ‘How is it possible I don’t know about this?’ ” Milroy says. “It’s a one-word answer, I’m afraid, and it’s ‘patriarchy’ and the way we’ve overlooked the accomplishments of women in every field, not just in art. We had a lot of fiery grannies in wheelchairs shaking their fists at the sky. It was very gratifying.”

Uninvited: Canadian Women Artists in the Modern Moment opens April 9 and runs until May 8 at Glenbow at the Edison, 150 9th Ave. S.W.