Invoking the Group of Seven in a Love Letter to Canada

Invoking the Group of Seven in a Love Letter to Canada 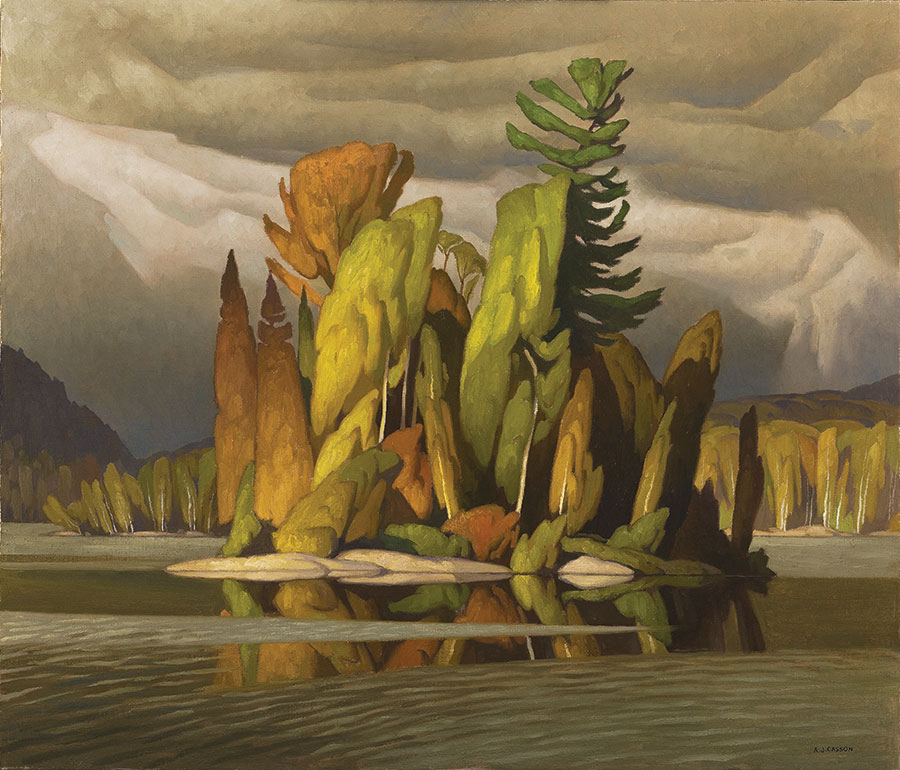 Our national spirit is embodied by our vast prairie lands and great lakes. And in our oceans from coast to coast to coast and the jagged mountains that climb high, daring to touch the sky with their snow-white peaks.

About 100 years ago, a collective of seven artists decided to document it all. Thick oil paints so rich with intensity – boreal greens, snowcap whites, lake blues and fiery oranges coming to life on canvas. The Group of Seven has a birthday this year, celebrated in Like a Vision: the Group of Seven at 100, now on at the McMichael Art Gallery in Kleinburg, Ont., from which the paintings on these pages come to us. Ice as smooth as glass, with just a hint of blue hue cool emanating from it still gives us the chills; burnt wood browns and stretches of blazing yellows and reds punctuating the pines feed our warmth. A century of art. It continues to stir us to catch our breath and discover the evergreen beauty of our landscape. It inspires thoughts of travelling again, exploring this land before we go further afield once more. Outward from our nation’s capital threads a waterway so historic it’s been deemed a UNESCO World Heritage site. A testament to human ingenuity, the Rideau Waterway’s series of traversable canals and locks from Ottawa to Kingston still stand as a brilliant example of our early 19th-century chutzpah. Slow travel by boat along this Canadian treasure. Loons calling, great blue herons fishing and peregrine falcons swooping only add to the scenery. It leaves us awestruck.

Once we were given the green light in Ontario to spend more time with our social bubble, I ran for this river with a constant travel companion. Actually, it’s more than a river. The Rideau Waterway comprises canals and locks, lakes, tiny pine tree-dotted islands and forested shores lined with cottages, cabins and boathouses. The water is sparkling, crystal clear. And there were nearly no active cases of COVID-19 in the area. We can travel by train again, and Via Rail has daily service to our stop: Smiths Falls. The town is just outside Ottawa, along the Rideau, and is the North American HQ for Le Boat, a European company that features yacht-type houseboats that ply the rivers of France, the U.K., Holland and Italy – and, since 2018, Canada.

At the train station, we’re asked a series of questions (any fever, cough or difficulty breathing?) and organized into different cars, depending on our final destination. Everyone must wear a mask the entire time while on board. If you don’t have one, the train conductors will offer it to you, with a pair of tongs, only touching the strings to maintain as little contact as possible. And seating is arranged so physical distancing can be adhered to. Unless you’re travelling together, you can’t sit next to anyone else.

We had arranged a car service — the driver was masked — to take us to the neighbouring heritage town of Merrickville-Wolford, all gorgeous stone Victorian houses-turned-boutiques and restaurants. Lunch was in an open courtyard, with tables distanced at least three metres apart, and our server wore a clear visor. Nice, as we could see her smile, but still felt protected.
No car? No problem. While still on the train, we went online and ordered groceries from the local store for delivery. Le Boat, too, offers a shopping service for non-perishables, so the pantry was already stocked when we arrived. (But if you need other supplies, everything is within walking distance of the marina.) On checking in, we were offered hand-sewn cotton masks, and there is hand sanitizer on the boat. Cabins come with ensuite baths, so no sharing, and freshly laundered linens and towels were folded and waiting for us to make our own beds. I didn’t mind; it made me feel better knowing the linens were untouched. We have a training session on how to drive our Horizon Cruiser (no experience or licence required, but knowing how to drive a car helps). It’s recommended you don’t go more than about seven kilometres an hour, and we’re escorted through the first lock. Then we were off. We did all our own cooking and cocktail-making, so we were able to control when and what we ate; how far we travelled and where we stopped for the night. Regaining the sense of freedom and watching this gorgeous part of our country pass by, we’re secure in our bubble. Drifting along with the loons floating nearby and the herons and falcons soaring overhead was the ultimate. About now, the cornfields in the East and on the Prairies are stretching skyward, soon to give us their gift of gold. Fresh-picked from the farm, boiled or barbecued, the kernels soaked in butter, running down our fingers and our chins as we take the first bite. The taste of late summer. Sweet.

The chill is already in the air over the Atlantic, with the winds bringing autumn. The icebergs have retreated, giving the whales and dolphins and the fishermen, too, a wider berth among the waves. The Jellybean Row Houses of St. John’s glow and show off their colours in the fall sunset, reflecting the vibrancy of this town and its people.

The tides of the Bay of Fundy ebb and flow like nowhere else – the highest recorded in the world. To stand on the ocean floor, squishy mud between our toes and weave our way through the Hopewell Rocks in the morning, only to kayak around the exact same rocks in the afternoon – it’s like walking on water. A natural wonder of North America. And it’s ours.

The skies over Jasper National Park in Alberta are a wonder in their own right, a dark sky preserve that’s counted as the second largest in the world. Look up when night falls and, on a clear night, you can see forever.

Our age is showing but in a very good way. The more than 400-year-old citadel that is Quebec City still stands on guard, nary a crumble in the walls of stone, nary a tumble on the cobblestones that have seen so much history. Not bad for one of the continent’s oldest towns. There’s a joie de vivre here that helps maintain its youthfulness. It brought us the Bonhomme, after all. And no one does winter quite like this city. When the chill sets in, skate parks and underpasses turn into ice-skating rinks and giant snow slides. Hollow walking sticks have just enough space to store a shot or two of warming booze in their caps. Mais oui! What’s in a name? Niagara. An anglicized derivative of the Iroquoian word Onguiaahra, to Merriam-Webster, it means an overwhelming flood or a torrent. To me, it says awesome. Power. Beauty. A force to be reckoned with and a familiar symbol of our fight to remain independent from our neighbours to the south, a nearly impregnable borderline of majestic might. It doesn’t hurt either that the good earth near the falls gives us vineyards and orchards bursting with fruit — and wine.

Here, I give you a few more names that show the influences of our culture. Louise, Victoria, Regina, all regal nods to our connection to the British Monarchy. Blend in en français: Montreal or Portage la Prairie. Nunavut and Iqaluit, both words from Inuktitut, the language of our Inuit people. Toss in a generous handful of names with Indigenous (Ontario, Saskatchewan) and First Nations origins for nearly everywhere else (Toronto, Medicine Hat, Yellowknife) and the quirky — Come by Chance, Joe Batt’s Arm or Vulcan — oh! stop me now because I can go on.

The Okanagan, too, is a bounty. A cornucopia of grapes, fruits and veggies and the chefs that know just what to do with it all. Among the warmest places in the country, this B.C. desert-like valley is also home to a legend. Ogopogo, Okanagan Lake’s resident monster, is no doubt a distant cousin of Nessie.
Speaking of monsters, a particular lobster pulled from the Nova Scotia waters — where about a quarter of the country’s crustaceans come from – clocked in at about 44 pounds. But don’t be frightened. The ones you’re cracking from the shell are probably closer to about 1.5 pounds. And I recommend the butter, also sweet.

Among the fairest sweets is our Anne of Green Gables, the Prince Edward Island pixie, created by Lucy Maud Montgomery in 1908. Still 11 years old in our hearts, she never gets old and is adored the world over. I did say we age very well. Not far from Anne’s island home is Charlottetown, where in 1864 the seeds of Confederation were planted. A few years later, Canada began to bloom.

It was around about that time that a different kind of gold, the hard, shiny kind, was discovered in the north. Flowing upward from B.C.’s Fraser River, the sparkly stuff was struck in the Klondike, Yukon. We were really on the map, now.

And about all that water. Truly one of our country’s greatest gifts. It’s our lakes, more than 30,000 great and small that bind us. We’ve also got the Pacific, the Arctic and the Atlantic. A lone kayaker slices through the still surface of Hudson Bay, near Churchill, Man., home of the polar bears. Another figure cuts through the water, like a pale shadow, and comes alongside. It’s not a bear, nor is it a ghost. It’s a beluga, coming up to say hello.

A version of this article appeared in the Sept/October 2020 issue with the headline, “A Love Letter to Canada,” p. 81.