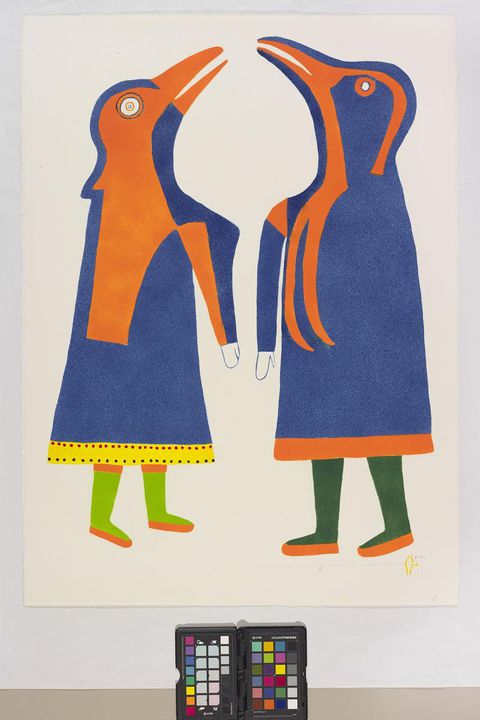 From spring to summer. From fearing each other to celebrating in each other’s presence. They are thoughts for our times, evoked by Inuit artist Jessie Oonark’s 1979 image “Angagok Conjuring Birds.”

Angagok (also spelled angakkuq) are often called upon to serve as healers or as keepers of justice in the community.

Here, they are transforming into birds, a recurring image in Oonark’s work, notes Sarah Milroy, chief curator of the McMichael Canadian Art Collection, where a copy of this print resides. The figures, male or female, “serve as spiritual mediators, (and are) called to their roles through visions or dreams. Stories abound of their powers to fly or run as fast as the caribou.” Or to transform.

It is one of hundreds of images that Oonark, born in 1906 in the Barren Lands, north and west of present-day Baker Lake in the Kivalliq Region of Nunavut, created. She spent her early life in Utkusiksalingmiut camps, in traditional pursuits including dressing caribou and sealskins, as well as making parkas and other items of traditional clothing, wrote Janet Catherine Berlo in “North American Women Artists of the Twentieth Century.”

In the late 1950s, Oonark moved to Qamani’tuaq — Baker Lake — and it was only when she was 59 that she began drawing and creating textile hangings. Soon she had her own art studio and, eventually, a salary.

Between 1970 and 1985 more than 100 of Oonark’s drawings were translated into prints and issued in Baker Lake’s annual print editions, Berlo writes. Three of her prints were also released through the famous Kinngait (Cape Dorset) print program between 1960 and 1961 — the only Inuk outside the community to have her work included in that collection. Her work hangs in the National Arts Centre; before she died in 1985, she was named to the Order of Canada.

You can see more of the McMichael Canadian Art Collection at mcmichael.com or learn more about Jessie Oonark at inuitartfoundation.org.