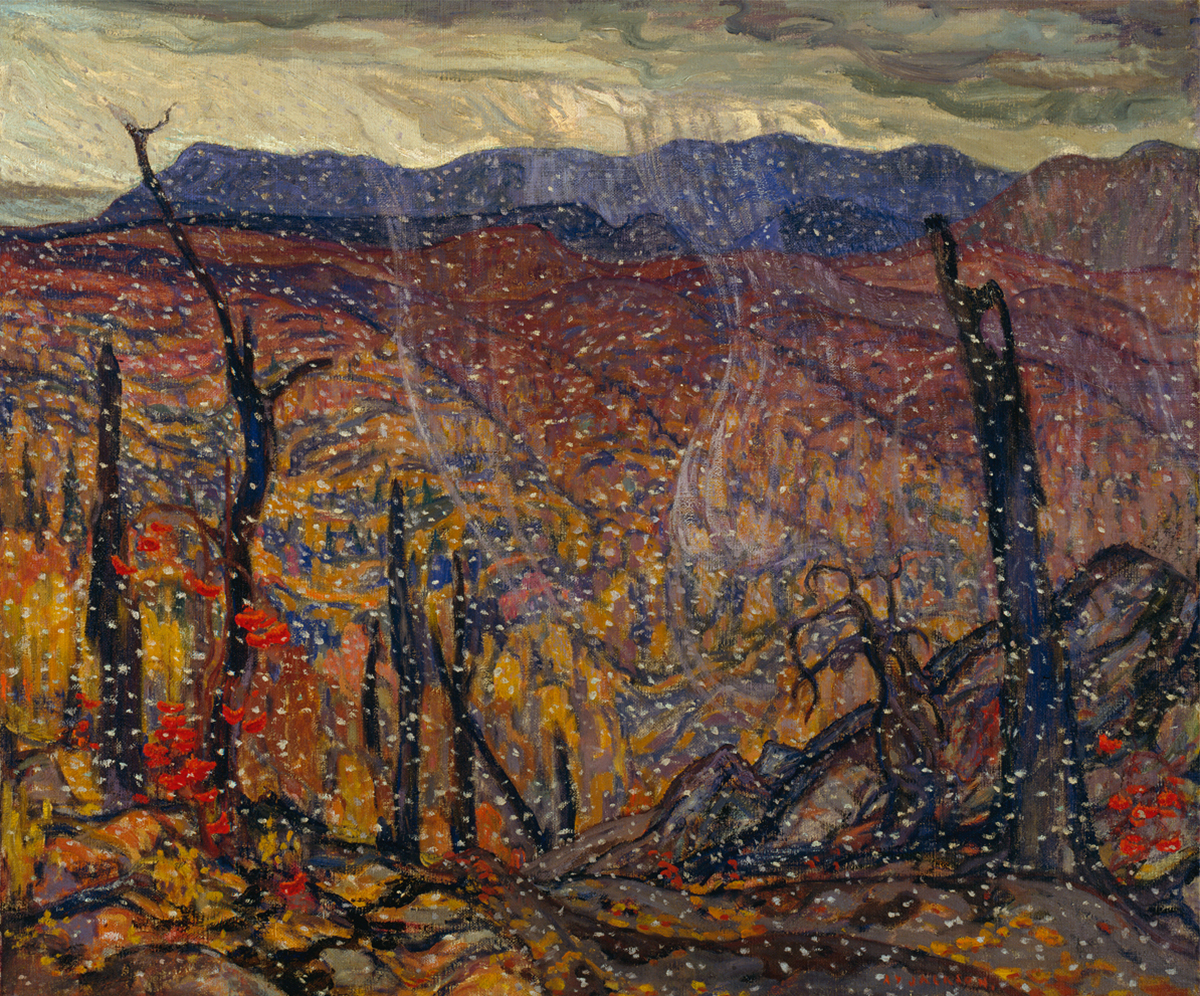 January 13, 2020, Kleinburg, ON – The McMichael Canadian Art Collection is pleased to announce a historic season of exhibitions that further the gallery’s mandate to protect, preserve and promote the art of Canada. In 2020, the McMichael will serve as the epicentre of celebrations commemorating the centenary of the Group of Seven’s first exhibition with a ground-breaking lineup of programming throughout the year.

To commemorate the 100th anniversary of the Group of Seven’s first major exhibition, McMichael Executive Director Ian Dejardin dove deep into the gallery’s extensive Group of Seven holdings to develop “A Like Vision”: The Group of Seven at 100. Opening on January 25, 2020, the exhibition features more than 280 artworks spanning five galleries, including beloved masterpieces by every member of the Group, as well as a selection of lesser-known pieces, such as a series of humorous sketches by Arthur Lismer depicting his fellow artists, and Lawren Harris’s Montreal River (c. 1920), the first work acquired by Robert and Signe McMichael in 1955.

One of Canada’s most beloved artists, Tom Thomson (1877–1917) is often associated with the Group of Seven but was never a formal member. Prior to his tragic death in 1917, Thomson dazzled his fellow artists with the brilliance of his oil sketches—works that would become Canadian icons. Discover the paintings that inspired the founding of the Group of Seven and altered the course of Canadian art history forever.

This special presentation of works on paper by the Canadian painter and printmaker Walter J. Phillips (1884–1963) explores the artist’s emotional connection and artistic response to Ontario’s Lake of the Woods region. Phillips was born in England and moved to Canada in 1913, settling with his family in Winnipeg. His summers were spent at Lake of the Woods from 1914 until 1940, grounding his sense of belonging to his new home. Phillips created works of quiet subtlety and serenity that capture the unique topography of the region, gracefully combining the graphic languages of Japanese printmaking and the British Art and Crafts style. The exhibition is guest curated by Sophie Lavoie.

In 2014, Ontario-based painter and printmaker John Hartman (b. 1950) embarked on a project to capture the intimate relationship between more than 30 Canadian authors and the places that inspire them. The result is a body of portrait paintings that celebrate the richness of Canada’s literary fabric. The McMichael is pleased to debut John Hartman: Many Lives Mark This Place, a special exhibition organized by the Woodstock Art Gallery. The exhibition features approximately 30 large-scale paintings from Hartman’s portraits series and a selection of landscape paintings that showcase the artist’s celebrated skill for depicting nature. Many Lives Mark This Place will be accompanied by a series of public literary discussion panels with the featured authors, led by McMichael Chief Curator Sarah Milroy.

Award-winning Edmonton-based Cree painter Brenda Draney asserts that stories are as much about what is left out as what is included. This belief colours her approach to painting – to record not just what she sees, but what she strives to remember. The exhibition Brenda Draney combines a selection of the artist’s early paintings with more recent works created in response to her childhood encounters with settler landscape art, particularly A.J. Casson’s iconic White Pine (c. 1957). The exhibition is guest curated by Laurel Saint-Pierre.

While women artists of the early twentieth century were known for depicting interior spaces as places of privacy and domestic quietude, Toronto artist Margaux Williamson’s (b. 1976) interiors reveal spaces of creativity, subjectivity, and anarchic experimentation. Williamson has a distinctive way of understanding and depicting space and a woman’s place within it, exploring the studio, the home and the bar as subject matter, as well as the interior spaces of subjectivity.

Uninvited: Canadian Women Artists in the Modern Moment is a major exhibition of Canadian women artists timed to coincide with, and offer commentary on, the centenary celebration of the Group of Seven. Uninvited will gather more than 200 pieces of art by a generation of extraordinary women painters, photographers and sculptors from a century ago — pioneers who opened new frontiers for women artists in Canada – as well as works made by their Indigenous female contemporaries working in traditional media, for a cross-country snapshot of female creativity in this dynamic modern moment.

Chief Curator Sarah Milroy shapes a survey of the McMichael’s remarkable holdings of Indigenous art, from the masks collected by Robert and Signe McMichael in the 1950s to the urgent political works of Carl Beam, Faye Heavyshield and Robert Houle collected in the 1980s and 1990s to a roster of new acquisitions representing the flowering of contemporary Indigenous art over the past two decades, including landmark works by Rebecca Belmore, Kent Monkman, Meryl McMaster and others.

This exhibition charts Christi Belcourt’s (b. 1966) artistic career beginning with early works showcasing the natural world’s beauty and on to her large sweeping murals, including her collaborations with knowledge holder, storyteller and emerging visual artist Isaac Murdoch. Spanning more than 25 years of artmaking, the exhibition celebrates Belcourt’s many inspirational, artistic and collective achievements. Uprising is co-produced by Thunder Bay Art Gallery and Carleton University Art Gallery.

Media wishing to request high-resolution images of the artworks may contact Sam Cheung at scheung@mcmichael.com or 905.893.1121 ext. 2210.

*THE ART OF CANADA is an official mark of the McMichael Canadian Art Collection.