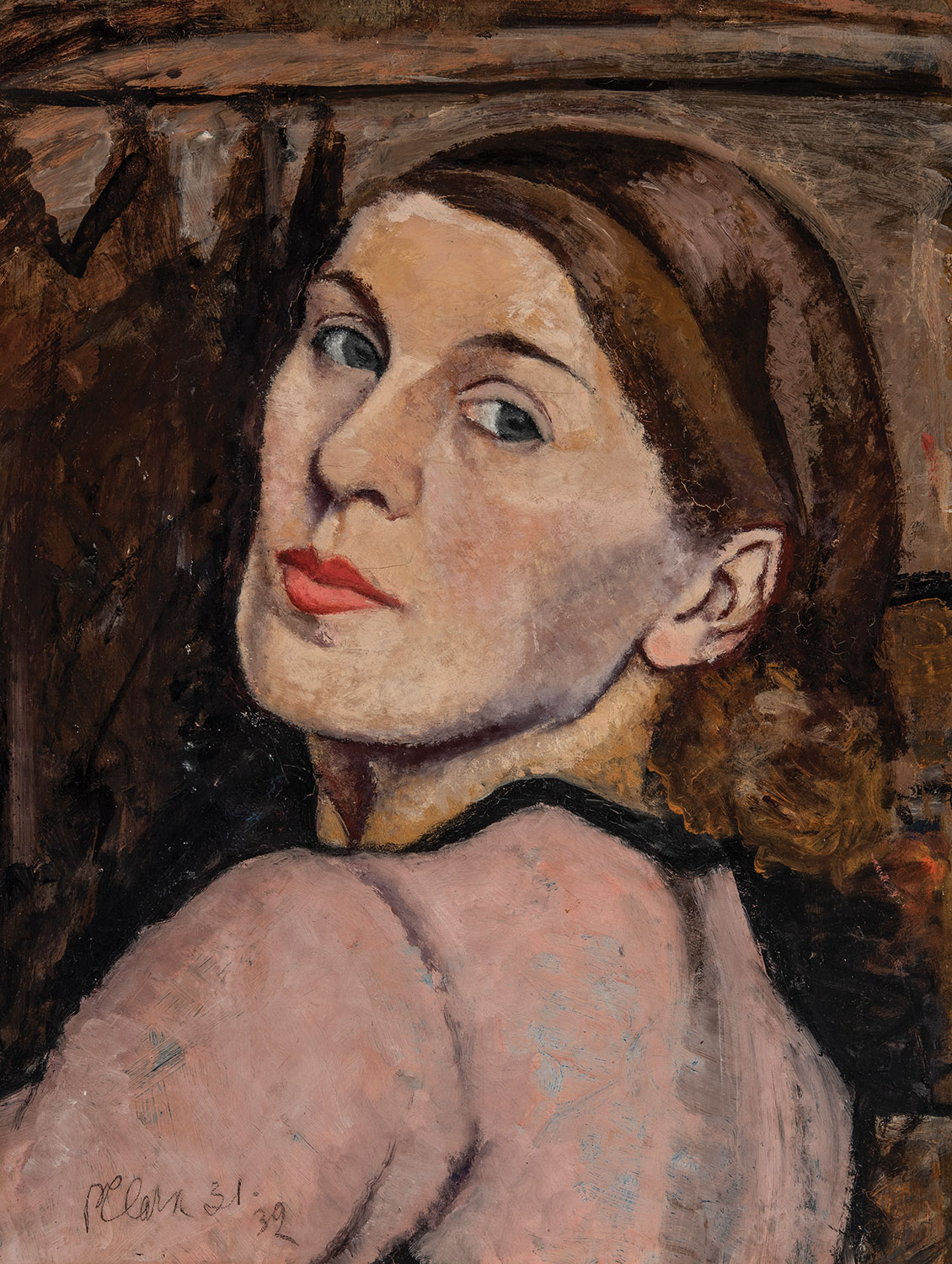 While the McMichael hopes to be able to offer these exhibitions in-person as scheduled, the Gallery has also extended the dates of existing exhibitions and continues to produce a robust slate of virtual programs, tours, curatorial talks and more, to allow visitors to engage with the collection from wherever they are. As Canadians look to the arts for inspiration, insight, and escape, the McMichael is committed to offering a creative oasis in turbulent times.

Denyse Thomasos (1964–2012) was a Trinidadian-Canadian artist whose epic paintings incorporate imagery from a range of sources, including Caribbean textiles, historic slave ships, industrial shipyards, graveyards, villages and maximum security prisons. The structures that confine and define us — whether political, social or architectural — served as the subject of her works. With her lush painterly approach, Thomasos compounded these subjects into form and colour. Her art enacts a delicate balance between representation and abstraction, and holds a unique place in the history of Canadian art, adding to a narrative from which BIPOC voices have been excluded for too long. The McMichael’s exhibition will gather works from all phases of the artist’s career in celebration of her historic contribution.

This exhibition is co-curated by Gaëtane Verna, Director of The Power Plant Contemporary Art Gallery in Toronto, and Sarah Milroy, Chief Curator of the McMichael Canadian Art Collection. The accompanying catalogue includes a curatorial conversation between Verna and Milroy, as well as an essay by illustrious Canadian author Esi Edugyan.

Jon Sasaki (b. 1973), a Toronto-based multidisciplinary artist whose practice brings together performance, video, objects and installations, will present a suite of photographs depicting petri dishes of bacterial cultures derived from the palettes and easels used by members of the Group of Seven and Tom Thomson held in the McMichael’s collection. These large-scale photographs will reveal microscopic details that affirm the artist’s reverence towards the Group’s legacy while simultaneously examining and reframing the tradition of the Canadian landscape painting through the lens of photography. The artifacts from which the microscopic organisms were gathered will be on view concurrently, and will offer a dialogue with Sasaki’s photographs, weaving together a poignant story of Canadian art and artists past and present. This exhibition is part of the Scotiabank CONTACT Photography Festival.

Uninvited: Canadian Women Artists in the Modern Moment is a major exhibition that will gather more than 300 pieces of art by a generation of extraordinary women painters, photographers, sculptors, architects and filmmakers from a century ago — pioneers who opened new frontiers for women artists in Canada — as well as works made by their Indigenous female contemporaries working in traditional media, for a cross-country snapshot of female creativity in this dynamic modern moment.

Uninvited draws its namesake and curatorial themes from the disadvantaged position many talented women artists were working from during the heyday of the Group of Seven, with the exhibition offering a riposte on the Group’s recent centenary celebration. The McMichael is proud to be presenting this revolutionary exhibition with  an accompanying exhibition catalogue featuring contributions from a number of Canadian artists, thinkers, curators, art historians and writers who provide fresh outlooks at an aspect of Canadian art that has been relegated to the shadows for far too long.

For the first time, the art of the famed Beaver Hall Group of painters from Montreal (among them Anne Savage, Emily Coonan, Prudence Heward and Lilias Torrance Newton) will be shown alongside the paintings of Emily Carr from British Columbia, and sculptures by Toronto artists Elizabeth Wyn Wood, Frances Loring and Florence Wyle. Uninvited will also include the contribution of women from immigrant communities in this period, such as the painters Regina Seiden and Paraskeva Clark, as well as the work of Canadian expatriates like the avant-garde photographer Margaret Watkins, who left her home in Hamilton for the US and Scotland.

Uninvited: Canadian Women Artists in the Modern Moment is curated by McMichael Chief Curator Sarah Milroy and is made possible with the generous support of presenting sponsor BMO and the McMichael Women’s Art Council.

Looking to the ability of art to uncover and illuminate the present and past histories of the land, the McMichael will present From Water to Water: A Way Through the Trees, a site-specific mural installation by Anishinaabe artist Bonnie Devine (b. 1952) in the Grand Hall Alcove. Devine and her assistant, Mariah Meawasige, will conduct research on the Carrying Place Trail, which historically provided a connection for Indigenous people between Ontario’s Lakeshore and the Lake Simcoe-Georgian Bay Region and which runs alongside the Humber River and the surrounding lands on which the McMichael is located. Their research will inform the design and content of the mural. Inspired by the Gallery’s natural surroundings, this multi-media work will combine painting, sculpture, archival collage, and printmaking as well as archeological material extracted from nearby sites along the Humber River. The project will be launched with an outdoor opening ceremony hosted by Ojibwe Elder Garry Sault. Following its completion, the mural will remain on view in the McMichael’s Grand Hall Alcove.

While women artists of the early twentieth century were known for depicting interior spaces as places of privacy and domestic quietude, Toronto artist Margaux Williamson’s (b. 1976) interiors reveal spaces of creativity, subjectivity, and anarchic experimentation. Williamson has a distinctive way of understanding and depicting space and a woman’s place within it, exploring the studio, the home and the bar in her paintings, as well as the sometimes fraught interior spaces of subjectivity. At a time when interior spaces have become such a pivotal part of our daily lives, Williamson’s explorations of places that have become familiar and foreign are particularly poignant.

Early Days: Indigenous Art at the McMichael
Dates: Closes May 30, 2021

Early Days: Indigenous Art at the McMichael tells the story of the Gallery’s long engagement with the art of Canada’s Indigenous peoples, reaching back to the collecting policies of our founders, Robert and Signe McMichael. Their first early forays into collecting Indigenous art included major acquisitions of Inuit art (prints and sculpture); of masks, historic rattles, headdresses and totem poles from the Northwest coast of British Columbia; as well as extensive acquisitions of paintings and prints by the Woodland School of artists in Ontario, in particular the work of Norval Morrisseau, who was artist-in-residence at the Gallery in 1979.

As an institution, the McMichael was at the forefront of collecting Indigenous art as fine art as far back as the 1980s, and continues to lead the discussion today, with landmark contemporary exhibitions of the drawings of Itee Pootoogook and Annie Pootoogook, and a planned exhibition of the Tahltan/Tlingit carver Dempsey Bob. Thanks to the McMichael’s long history of strategic acquisitions and carefully cultivated donations, the McMichael is now ready to intrigue and engage audiences in an exhibition that touches the heart of the Canadian story.

A Like Vision: The Group of Seven at 100
Dates: Ongoing

To commemorate the 100th anniversary of the Group of Seven’s first major exhibition, McMichael Executive Director Ian Dejardin dove deep into the Gallery’s extensive Group of Seven holdings to develop A Like Vision: The Group of Seven at 100. Originally opened on January 25, 2020, the exhibition features more than 280 artworks spanning five galleries, including beloved masterpieces by every member of the Group, as well as a selection of lesser-known pieces, such as a series of humorous sketches by Arthur Lismer depicting his fellow artists, and Lawren Harris’s Montreal River (c. 1920), the first work acquired by Robert and Signe McMichael in 1955. The accompanying exhibition catalogue, A Like Vision: The Group of Seven and Tom Thomson, was critically hailed as one of 2020’s most important Canadian art publications and featured contributions from a number of Canadian artists, writers, and curators, including art historian Gerald McMaster, filmmaker Jennifer Baichwal, historian Charlotte Gray, environmentalist Wade Davis, painter Robert Houle, and Inuk writer Tarralik Duffy.

One of Canada’s most beloved artists, Tom Thomson (1877–1917) is often associated with the Group of Seven but was never a formal member. Prior to his tragic death in 1917, Thomson dazzled his fellow artists with the brilliance of his oil sketches—works that would become Canadian icons. Discover the paintings that inspired the founding of the Group of Seven and altered the course of Canadian art history forever.

Uprising: The Power of Mother Earth
Dates: Extended until April 25, 2021

Uprising: The Power of Mother Earth, co-produced by the Thunder Bay Art Gallery and Carleton University Art Gallery, is the first retrospective of Christi Belcourt’s work, and spans more than twenty-five years of her art-making career. The exhibition traces her practice from its beginnings in the early 1990s to the present, and concludes with recent works made collaboratively with Isaac Murdoch, an Anishinaabe knowledge keeper and emerging visual artist. Uprising: The Power of Mother Earth brings together more than thirty major Belcourt paintings on loan from numerous private and public collections including National Gallery of Canada, Wabano Centre for Aboriginal Health, Art Gallery of Ontario, Canadian Museum of History, Thunder Bay Art Gallery, and Crown-Indigenous Relations and Northern Affairs Canada. The exhibition also includes a selection of Murdoch’s iconic works, which have been featured prominently on the front lines of the Indigenous resistance movement against resource extraction. Together, these two artists produce powerful images that champion the restoration of balance between all living beings and the natural world, reflecting the deep traditions of Indigenous culture.

By popular request, the McMichael is pleased to announce that Uprising: The Power of Mother Earth has been extended until April 25, 2021. The Gallery will offer a complementary suite of virtual tours free of charge, allowing the public to explore Belcourt’s powerful work from the safety of home.

Please note that the McMichael Canadian Art Collection is closed until further notice while York Region is in lockdown. The McMichael’s grounds and trails remain open but are not being maintained while the Gallery is closed. Media wishing to request an interview with exhibition artists, curators, Chief Curator Sarah Milroy or to obtain high-resolution images of the artworks are requested to contact Sam Cheung at scheung@mcmichael.com or 905.893.1121 ext. 2210.

The McMichael Canadian Art Collection is an agency of the Government of Ontario and acknowledges the support of the Ministry of Heritage, Sport, Tourism, Culture and Industries, and the McMichael Canadian Art Foundation. It is the foremost venue in the country showcasing the Group of Seven and their contemporaries. In addition to touring exhibitions, its permanent collection consists of over 6,500 artworks by Canadian artists, including paintings by the Group of Seven and their contemporaries, as well as First Nations, Métis and Inuit artists. The gallery is located on 100 acres of northern landscape and hiking trails at 10365 Islington Avenue, Kleinburg, north of Major Mackenzie Drive in the City of Vaughan. For more information, please visit mcmichael.com. 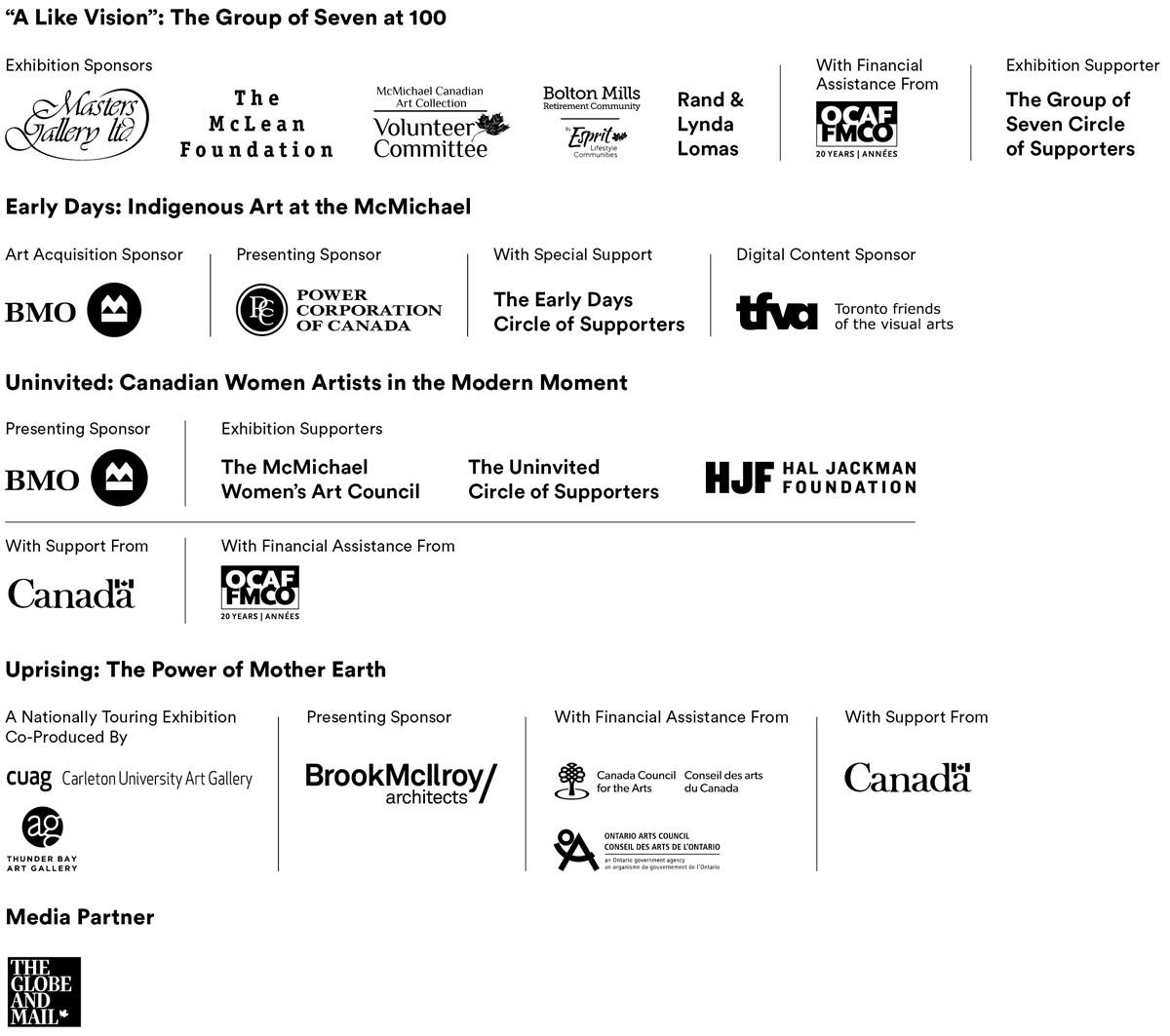