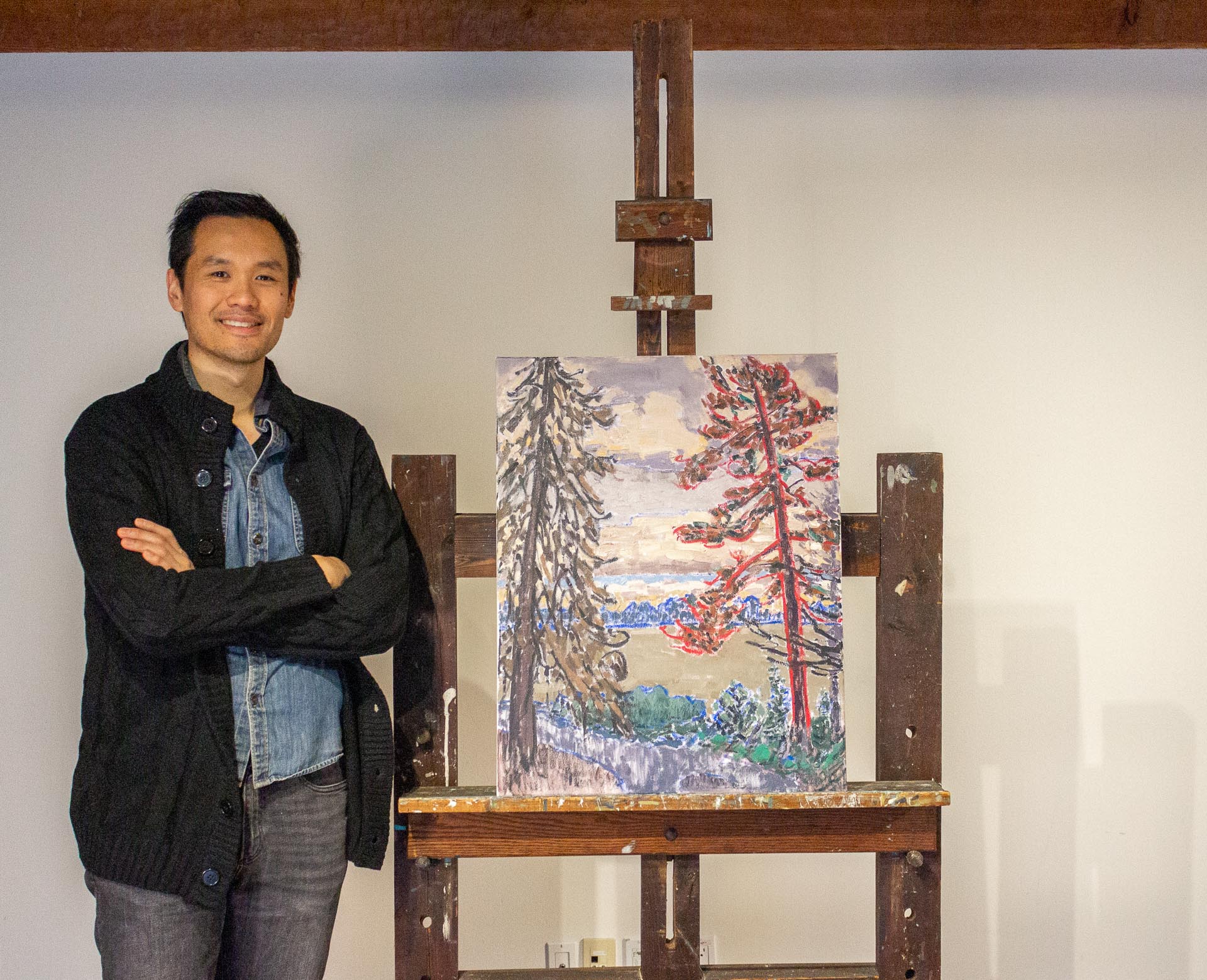 March 9, 2020, KLEINBURG, ON – Following four breathtaking episodes featuring stunning Canadian locales and a tense competition between over 60 artists, the McMichael Canadian Art Collection is pleased to announce that Toronto artist Nelson Cheng has won Makeful TV’s original series Landscape Artist of the Year Canada. Cheng’s winning painting will be on view at the McMichael on a historic easel once used by both Tom Thomson and A.Y. Jackson.

Hundreds of artists around Canada applied and 18 were selected as contestants to depict some of the country’s most astounding natural landscapes. Joining the selected 18 were a variety of talented walk-on artists who were invited to compete as wildcard contestants.

The finale of Landscape Artist of the Year Canada, which aired March 8, was filmed at Lake Rosseau, a famous Muskoka landmark known for its vivid depictions in paintings by members of the Group of Seven. As a wildcard walk-on contestant, Cheng beat out finalists Elzbieta Krawecka, Andrew Cheddie Sookrah, Denise Antaya, Tosh Jeffrey, Deborah Danelley and Mackenzie Brown.

“I thought it was a big win just showing up as a wildcard to paint,” said Nelson Cheng, Landscape Artist of the Year Canada. “I felt good about it and now to win, I’m completely speechless. This win is life changing. I feel very fortunate to have been a part of this wonderful experience and humbled to have been chosen to paint alongside such a talented group of artists.”

Cheng is a self-taught professional artist with a Bachelor of Honours from York University/Sheridan Institute and a Masters of Architecture from the University of Toronto. Influenced by a design background, his artistic approach relies heavily on patterns, abstractions, shapes, forms, perspectives and geometry. Nelson’s work explores ideas and narratives from lived experiences and are often interpreted through landscape and urban subject matter of his surroundings.

Landscape Artist of the Year Canada premiered exclusively on Makeful TV on February 16 and aired every Sunday evening, concluding on March 8. Based on the hit television series from the United Kingdom, the Canadian adaptation is produced by marblemedia. Following the world premiere, the Canadian Broadcasting Corporation will air the series later in the year.

“As home to the art of Canada, the McMichael was very pleased to have been involved in the series,” said Ian Dejardin, the executive director of the McMichael Canadian Art Collection who appeared as the surprise judge on the series finale. “People tend to think of the McMichael as a place to see great Canadian landscapes of the past, but we also work extensively with contemporary Canadian artists. Nelson’s winning artwork will be in good company.”

Cheng’s winning artwork will be on view at the McMichael Canadian Art Collection until April 19 in the Founders’ Lounge; the heart of the McMichaels’ former home. The painting will be displayed on an easel belonging to Canadian art pioneer Tom Thomson and subsequently used by the Group of Seven’s A.Y. Jackson. The Group’s centenary year is currently being celebrated at the McMichael in the exhibition “A Like Vision”: The Group of Seven at 100.

Makeful is a Blue Ant Media lifestyle specialty channel celebrating the creativity that exists within us all. Makeful’s programming combines food, design, style and DIY series, featuring passionate personalities who share their ideas and inspire audiences to bring imagination into every aspect of their lives. Makeful also unites the creative at heart with fresh and contemporary content through its digital and social platforms. BeMakeful.com

marblemedia is an independent, leading global entertainment company headquartered in Toronto, Canada. It develops, produces, and distributes compelling primetime scripted, unscripted, kids and family content both for the domestic market and for a wide range of high-profile platforms and broadcasters around the world. Learn more at marblemedia.com