Skip to content
Previous Next
Rediscovering the Group of Seven

Rediscovering the Group of Seven

Rediscovering the Group of Seven

Link to the article online 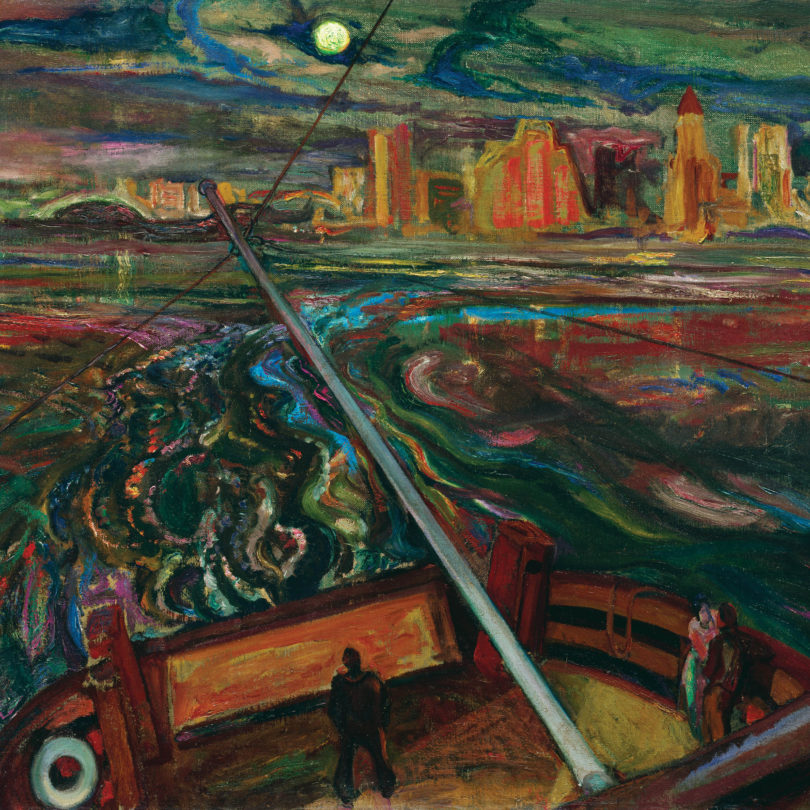 On a family vacation in the early 1970s, my parents took me to the McMichael Canadian Art Collection, fulfilling our patriotic duty of pilgrimage to view the Group of Seven paintings enshrined in the gallery just north of Toronto.

I must have seen a bunch of those canvasses that all Canadians recognize—rugged bush country, wind-sculpted pine trees, smoothed-out mountains. But what sticks in my mind is a tour guide telling us, as she nodded toward the figure of an elderly gentleman seated in a chair off the lobby, “And that’s Mr. Jackson over there.”

In the unreliable memory of a 10-year-old boy, her voice is reverentially hushed. As well it might be: A. Y. Jackson, who was 91 when he died in 1974, lived the last few years of his life in an apartment at the McMichael, imbuing the log-and-stone institution with an intimate link to the painters through whose eyes Canadians so often still see their own country. In fact, Jackson is one of several members buried on its woodsy grounds. In the McMichael’s current show, A Like Vision, marking the 100th anniversary of the Group of Seven’s first exhibition (which opened in Toronto on May 7, 1920), several of Jackson’s canvasses are among the standouts.

The way the group’s mythology took firm hold even back when its members remained very much among us—sometimes inadvertently displayed like living wax-museum figures—makes it nearly impossible to look at their art without the lore flooding to mind. I mean, of course, the mysterious drowning of Tom Thomson, not a member but the group’s inspiration, at Canoe Lake in 1917. Then the bonding of Thomson’s followers as they paddled and hiked into the northern Ontario bush together to invent Canada. And the resistance of the art establishment (often exaggerated in the retelling) to their romantic manner of depicting rocks and trees and skies.

It’s all good stuff. If other branches of Canadian art—literature or theatre or music—had access to such a compelling origin story, they would surely grab the chance to be more securely anchored in the popular imagination. Still, the challenge for Canadians giving in to the inevitable impulse to revisit the group at 100 is to somehow see the art as art, and not as the over-familiar illustrations of a nation-building saga. The test is less of the paintings than of the capacity of gallery-goers to be clear-eyed.

That certainly goes for anyone who had the chance, before the pandemic closed the McMichael’s doors on March 13, to take in the 280 paintings, drawings, prints and other artworks in the gallery’s centenary Group of Seven retrospective. The show is organized into separate sections for each artist, rather than, say, chronologically or by clustering together paintings of similar subjects. “If you’re going to do mountains and trees, that’s a different show,” Ian Dejardin, the McMichael’s executive director, told me. Another approach might have been to take an edgier slant, maybe highlighting criticism of the group’s tendency to envision an empty wilderness, as if Indigenous people didn’t really figure into it.

Any of these possible curatorial strategies would have run the risk of rendering the paintings secondary to ideas about them. “The simplest structure was best,” Dejardin contends. That doesn’t mean, however, that the show is merely a greatest-hits selection organized artist by artist. Yes, the exhibition offers representative examples of images anyone familiar with the Group of Seven would demand, but it also contains enough surprises to generate chances to see them in a new light.

Take Lawren Harris’s magisterial manner. The way he painted a Lake Superior island or a snowy Rocky Mountain peak, simplifying the forms to lend them that spiritual quality, makes his oeuvre instantly recognizable. The response he seemed to be going for: awe. And Harris still gets it. The McMichael show opens with a roomful of his paintings, including several blockbuster canvasses of exactly this sort. There’s no denying their impact. 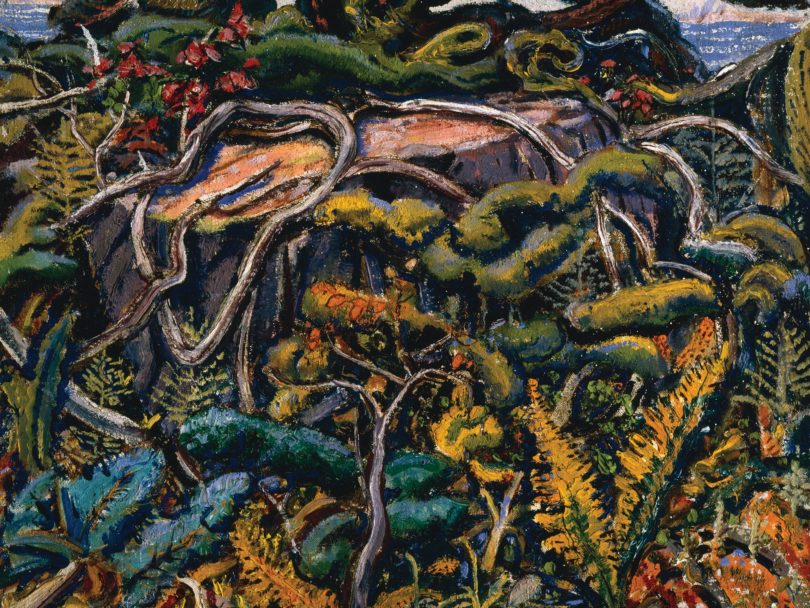 Yet move into the show a bit further, and the Arthur Lismer room offers an irreverent counterbalance to Harris’s sense of the sublime. Lismer’s landscapes have less star quality than Harris’s, but some, like a close-up of bush foliage called Canadian Jungle, richly reward a long look. Even more fun are his lighthearted depictions of fellow Group of Seven members at work. In a 1927 pencil sketch, Lismer depicts Harris as an orchestra conductor, baton in hand, directing the universe from his perch on a mountaintop. Rays of sunlight obligingly slant through clouds, just as Harris often made them do in his paintings. 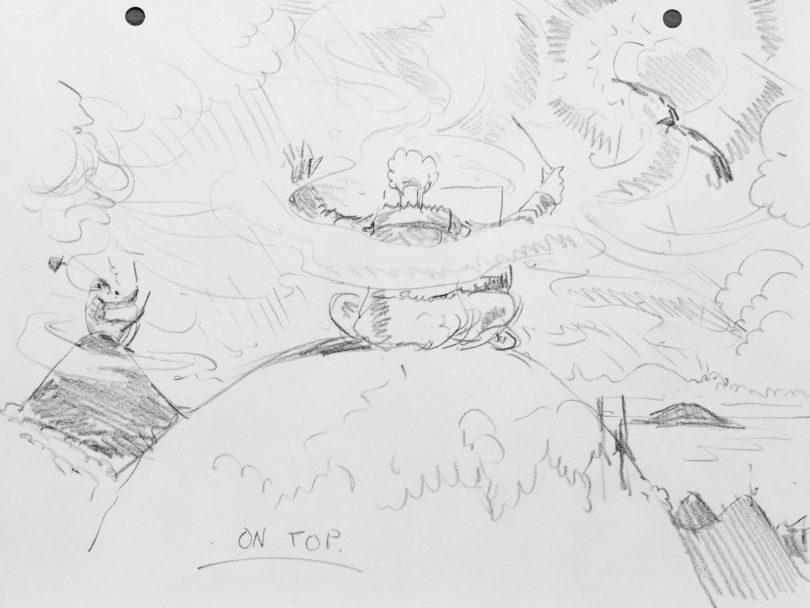 Lismer’s cartoon shows that the group was onto Harris’s grandiose quality early, and makes it possible to look at his style in a subtly revised light. “It proves that they didn’t take themselves that seriously,” Dejardin says. Tellingly, Lismer’s sketch came to the McMichael from Harris’s family. Harris evidently held onto it, proving he was, as Dejardin puts it, “in on the joke.” To me, this makes the spiritual immensity he captured if anything more impressive. He pursued that vision even knowing it can be a little much. 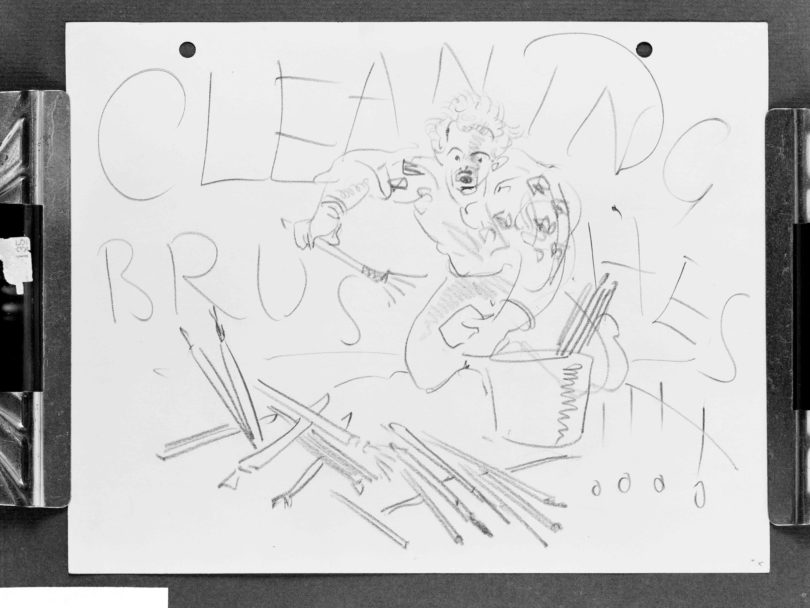 If the welcome touch of levity Lismer’s sketches provide is unique, the McMichael show offers other ways to break from the limiting notion that the Group of Seven matters only because of how they saw the Canadian landscape. The section devoted to F. H. Varley, for instance, offers several of his justly admired portraits. Even more diverting is his Night Ferry, Vancouver, an almost garish image of the city’s skyline seen across a boat’s bow. Varley was a troubled hard drinker, and the bruised purples of this perfervid painting seem to well up from the depths of depression.

Darkness of another sort pervades A. Y. Jackson’s First Snow, Algoma, from 1919-20. Dejardin says the preparatory sketches for it depict a lovely wild landscape. But by the time Jackson completed the final painting, he had added burned tree trunks in the foreground and what looks like smoke rising all over. He had been an official artist of World War I, and the blasted European battlefields he so recently saw have clearly migrated to northern Ontario.

Harris as ironically self-aware, Varley as troubled artist, Jackson as war-haunted—these are useful tricks for offsetting Group of Seven clichés. In the end, however, no strategy for finding a fresh way into their art stands a chance against the real reason so many of us return to them so often: another jolt of the unifying glory of those landscapes. The price we pay for putting them at the centre of our national identity seems to be sacrificing an intimate connection—the thrilling illusion that a work of art speaks to us individually—in favour of a shared experience. 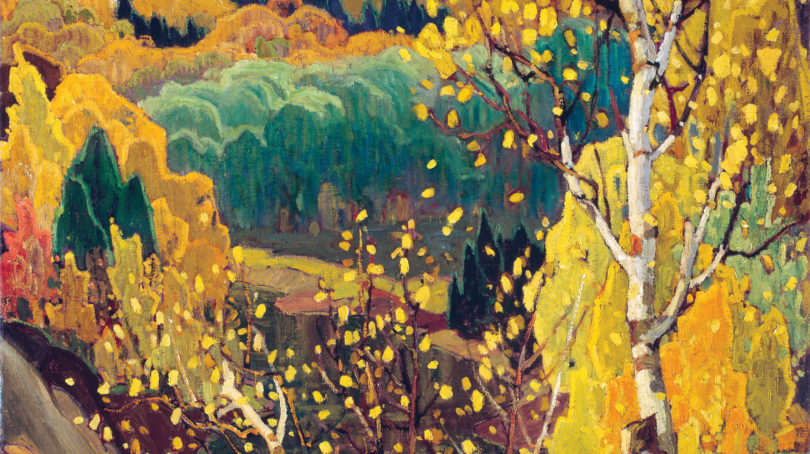 But maybe the group left us a way around this trade-off. In the final room of the McMichael show hangs a gorgeous Franklin Carmichael forest scene, with yellow-leafed birches in the foreground, called October Gold. It’s the sort of big, easy-on-the-eyes Group of Seven landscape that traditionally binds Canadians together. Beside it hangs a little full-colour oil sketch of the same scene, which Carmichael would have executed quickly out in the bush. The final canvas done in the studio feels composed and controlled, inviting shared appreciation at a respectful distance. But the little sketch tugs at each viewer to lean in all alone.

Following Thomson’s method, the group members painted many of these sketches, often on small wood panels. At their best, they contain a spontaneity that gives a lone gallery-goer the sense of looking over the painter’s shoulder, maybe with blackflies buzzing around. Dejardin says the panels are unlike the preparatory work of any other landscape school, and represent a unique legacy. One hundred years on, the Group of Seven is bigger than ever, but this secret path into their vision is wide enough for only one to pass at a time.

This article appears in print in the May 2020 issue of Maclean’s magazine with the headline, “Rediscovering the Group of Seven.”