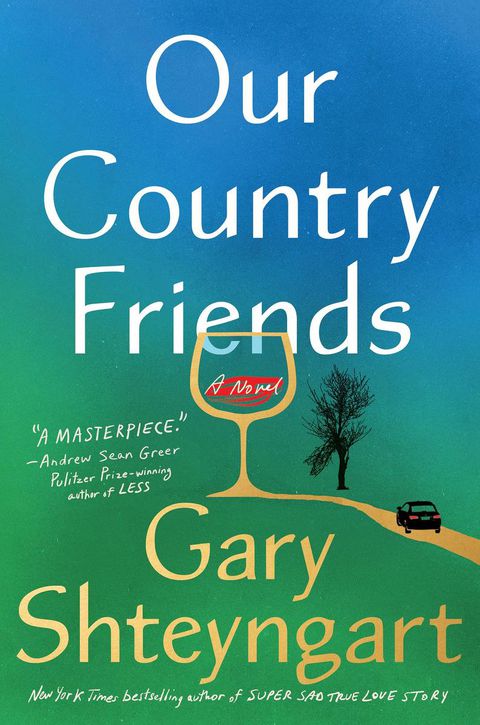 Thanks to the pandemic, the best books this year were slow to print and hard to obtain, though of course the same is true of the worst books. (The worst is Jonathan Franzen’s “Crossroads” about 1970s midwestern American Lutheran sincerity, uber-Franzen.) Seek out these fine books and I hope they arrive by Christmas.

“Our Country Friends,” by Gary Shteyngart. It’s a genuine masterpiece, the last thing I expected this year from this wonderful Russian-American novelist who recently wrote about his physical agony at age 40 from the long-term effects of a savagely bad circumcision at age seven. Russians suffer. That’s what they do. Jewish Russians suffer most. Shteyngart retreated with friends to his New York state country house to ride out the pandemic and as the resultant novel makes icily clear, exiles can’t escape their own natures. The friends, however glossy they seem, suffer from failure, fame distortion, envy, yearning, narcissism, anomie, paranoia, internetitis, app damage, you name it. No one makes it out intact. It’s painfully funny about striving, autism, Korean cuisine, not so much about the hallucinatory agonies of death by coronavirus. It shies from nothing.

“Shutdown: How COVID Shook the World’s Economy,” by Adam Tooze. If you can’t afford a house or expect your inflatable house price never to lose its effervescence, or if you can, how did Kipling put it, “lose, and start again at your beginnings/And never breathe a word about your loss,” you’ll enjoy the historian’s crisp explanations of how markets worked during the pandemic. They did and they didn’t. I sometimes despair about readers’ lack of interest in world finance which accompanies them every day of their lives. Reading about the massive economic forces overpowering the individual isn’t pleasant. But better to know why the world is changing with or without your help. Tooze has a talent for explanation. It leaves the reader feeling elegant.

“The Morning Star,” by Karl Ove Knausgaard. It’s August. It’s Norway. Without warning or explanation, a giant bright star appears in the sky. Like killer coronavirus floating in invisible clouds on streets and roads, there is something terrifying on the move. Five characters—professor, priest, reporter, father, psychiatric nurse—go about their days. There are three sections, First Day, Second Day and then a long disquisition, classic Knausgaard that I call The Bit You Don’t Have to Read. As always, he writes about epic psychic grandeur, our place on a planet we destroyed, and minute-by-minute business, how we switch the light off, close the door and pour ourselves a glass of water as the star glowers. There’s an atmosphere of dread that is engagingly familiar in this year 2021. Knausgaard is exactly the writer to understand how ill at ease we are, how disconnected, how likely to burst into tears.

“Uninvited: Canadian Women Artists in the Modern Moment,” edited by Sarah Milroy. This fascinating art book accompanies a McMichael exhibition about women artists whose work was and is ignored in favour of the Group of Seven. As one studies the paintings of humans and the built world, one begins to resent the Group of Seven guys. Much as I love their work, I do look at it and say, “That’s a tree. No doubt about that.” Whereas Yvonne McKague Housser’s paintings of northern towns, of empty sidewalks and mills, leave me caught and wondering. As Sara Angel writes, one painting of Cobalt, a town, was altered to make it brighter and prettier so it could sell but thoughtful readers will prefer the darker view. It’s a vision of a secret Canada peopled by secret female visionaries.

“Four Thousand Weeks,” by Oliver Burkeman. When Burkeman, an eloquent Brit, explained that the average human lifespan is 4,000 weeks, you could have pushed me over with a peony. It feels more like 72,000, does it not, more if you have roommates. Burkeman wants us to use our brief time better but not in a checking-off-a-list kind of way. Before the Industrial Revolution, people would rest after hard work. Now we fritter away our off-hours. Did you know that if people live to 100, at which point more people are born who then live to 100, the Renaissance was only five lifetimes ago? Get cracking, people. At what I don’t know, but it better start now.

“The Incomplete Framley Examiner.” This is the collected output of a small-town British newspaper as taken from a parody website and it is the funniest thing I (and actor Bob Odenkirk) have ever read. We all live in Framley. We’re all seething about housing, dogs, bins, vandals, the truncated new bike lane that is “not even as long as a small cycle” leaving “Framley cyclists furious at new facility for Framley cyclists.” The Framley Examiner is your vicious local Facebook page but most of all it’s BlogTO, chirpy, teenage, and illiterate, packed with mystifying headlines: “Local man neither local nor man” “Newby’s treats it’s shopper’s” “Man waits two weeks to be served in local restaurant” “Mayor D’Ainty lands on moon” Published overseas, you can buy it at bookdepository.com. It’ll show up eventually.