Skip to content
Previous Next
The Enthusiast: A Brush with Canadian Artistic Greatness

The Enthusiast: A brush with Canadian artistic greatness

The Enthusiast: A Brush with Canadian Artistic Greatness 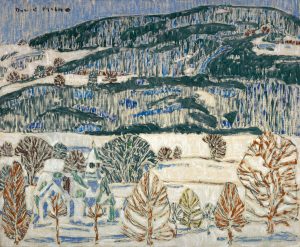 It was on a Grade 5 field trip that rolling hills constructed with splashes of colour, and goopy squiggles that became skies brought Canada to life for me in a new way, and changed my little world. It seems preposterous now, but I had never before visited an art gallery when our yellow school bus pulled up to what was then the McMichael Canadian Collection in Kleinburg, Ont. It was probably a 45-minute drive from my elementary school, but it was like visiting another planet.

Lawren Harris’s sunlit snow, Tom Thomson’s rippling bodies of water, Frederick Varley’s trees in wind I could almost feel on my face. In these paintings, a rugged kind of Canada felt vivid and real, but in a way that was nothing like the realistic paintings I had previously thought of as Great Art.

What really captured my 10-year-old imagination was probably the detail that this had been the home of a couple, Robert and Signe McMichael, who had collected this artwork, and who knew the members of the Group of Seven personally. Some of these artists had walked on this very ground! Some were even buried there. I looked out the giant windows and imagined them painting en plein air before I knew what that meant.

As an adult, I don’t get to Kleinburg very often; to begin with, Vancouver is home now. But when I’m back in Toronto, and able to swing it, I make a point of driving up Highway 400 to visit the place where my love for art was born.

This is not simply nostalgia. The bold, beautiful artwork at what is now the McMichael Canadian Art Collection continues to dazzle. And the McMichael’s temporary shows, such as the recent J.E.H. MacDonald and David Milne exhibitions, have been provocative and on point.

But there is also something about the property itself, a wild respite from the surrounding subdivisions, that makes the nature-inspired artwork inside extra powerful. 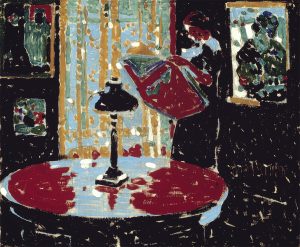 This little essay is a tribute to getting out of town to take in art. Of course, the great museums are an essential stop when travelling to cultural capitals such as New York, London or Paris. But two of my favourite galleries in this country are outside urban centres. And they are worth the drive, to borrow from that old leather goods commercial, to Kleinburg – or Whistler, where the Audain Art Museum beckons with its own Canadian treasures.

When the Audain Art Museum opened in 2016, there was much justified oohing and ahhing over the Patkau-designed building. But what stayed with me – and keeps me coming back – is the exhibition showcasing its permanent collection. This is a walk through a condensed history of British Columbia art (and thus, really, B.C. history), courtesy of Michael Audain, a developer and philanthropist, who conceived and funded the museum to house his extraordinary collection.

The first gallery is dramatic: a darkened room filled with historical Northwest Coast art, mostly masks, and the monumental The Dance Screen (The Scream Too) by Haida master carver James Hart.

Then, Emily Carr. There are currently 25 works installed here by B.C.’s most celebrated artist, bringing the feel of the forest inside.

This is followed by work from other standout B.C. artists including Lawren Harris, E.J. Hughes, Jack Shadbolt, Bill Reid, Robert Davidson and Beau Dick. A large gallery is filled with work by Vancouver’s great photoconceptualists, including Jeff Wall, Stan Douglas and Rodney Graham. The final galleries feature work by contemporary artists such as Brian Jungen and Gathie Falk.

There is also a large space for temporary exhibitions, currently a show by an artist I admittedly was unfamiliar with before my last visit. Joseph Tisiga is a Whitehorse-based Kaska Dene artist, only 34. Tales of an Empty Cabin: Somebody Nobody Was… is his first major solo museum exhibition. 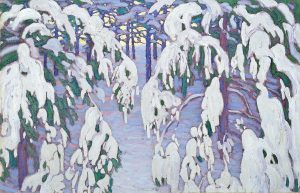 In this show, Tisiga explores themes of identity and cultural appropriation through constructions of “Indianness” for Euro-Canadian consumption.

I was particularly drawn to his 2017 series A Prop for Reconciliation, paintings in which Archie comic characters interact with Indigenous people, objects and structures. In one painting, Betty wraps a Hudson’s Bay blanket around an Indigenous woman; in another, Jughead, in his signature crown-shaped cap, sits next to an Indigenous man wearing a headdress.

The temporary exhibitions work best when in conversation with the Audain’s permanent collection. It is powerful to look at a painting of Dilton Doiley holding a Northwest Coast mask, knowing that the real thing is just steps away.

Perhaps the lack of big-city bustle outside heightens the experience of viewing the art inside the Audain and McMichael. Or maybe it’s being in a different headspace when in the country or the mountains, more receptive to beauty, with more bandwidth for ideas. But I am enraptured by these two museums, and the art they hold. Worth the drive, and then some.