Skip to content
Previous Next
The group of seven billion: This art was made by bacteria from the Group of Seven’s paint palettes

The group of seven billion: This art was made by bacteria from the Group of Seven’s paint palettes

The group of seven billion: This art was made by bacteria from the Group of Seven’s paint palettes 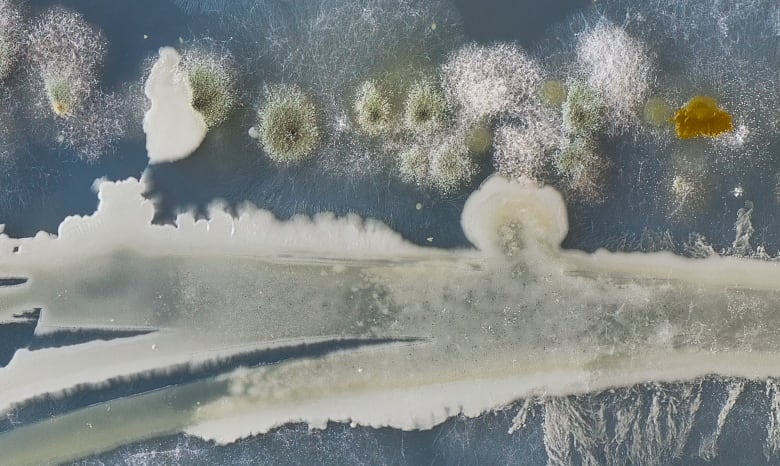 Squint and you’ll see the Canadian Shield dipping its grey granite fingers into the water. The glassy pool is so still that, reflected in its surface, you can find the trees that climb the hills above. Most have already lost their leaves. It must be the last days of autumn.

The photograph is indeed a landscape, though it’s a microscopic one. Its scene appears just like one from the Group of Seven, famed chroniclers of Canadian wilderness. And in many ways, it is a scene made by their hands.

100 years after the Group of Seven’s inaugural 1920 exhibition, Toronto-based artist Jon Sasaki has brought to life a new series of works “from” the Group and its forebear Tom Thomson. He’s done so by swabbing the painters’ brushes, paint boxes and easels, then photographing the surprising bacterial cultures that have sprung up. 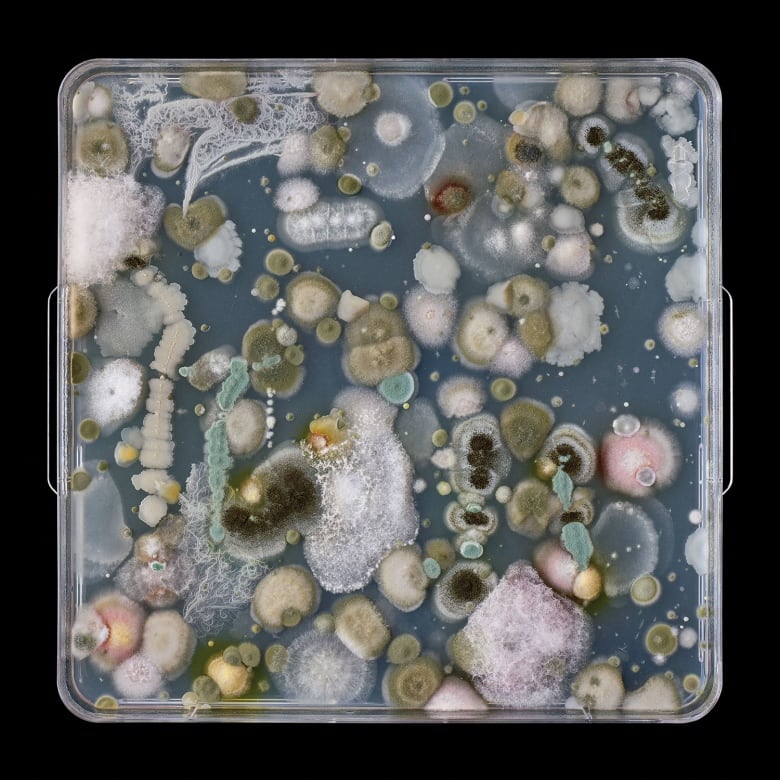 The playful conceptualist, who began his career as a landscape painter, has admired the Group’s work since early childhood. “In no small way, these paintings helped convince me I wanted to become an artist,” Sasaki says. He’s titled the suite of eight photographs hanging now at the McMichael Canadian Art Collection “Homage.” The project transcends simple tribute, however, as the artist rekindles the spirit of the Group to capture nature’s marvels from a more modern vantage.

Sasaki’s work began in the McMichael vault, where he and museum conservator Alison Douglas uncrated the artists’ tools. There were painting palettes from Frederick Varley, Arthur Lismer, A.Y. Jackson, Franklin Carmichael and Thomson; J.E.H MacDonald’s painting box; Lawren Harris’s paint box and palettes; an easel used by Frank Johnston. In the church of Canadian art, these objects are relics, something like saints’ bones, but what struck the artist most was how ordinary and modest they appeared. The only sign of their magic, he says, was in their patina — the evidence of the artist’s hard work.

“I think because I’ve always thought of the Group of Seven as ‘Canadian art royalty,’ I was picturing very regal tools … gold-plated palettes or something like that,” he says. “When I first saw these objects, I was quite taken aback by how humble some of them were — homemade and well-worn from use. It was a reminder that many of these artists struggled to make ends meet throughout their lives, and it made them seem more human and relatable.” 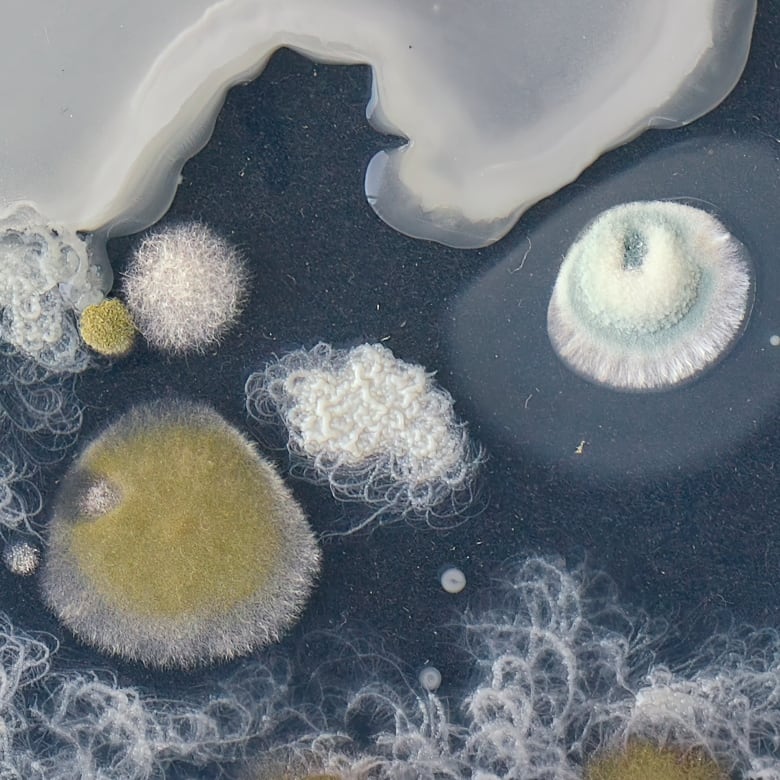 With sterile cotton swabs, Sasaki traced the objects one by one, “paying special attention,” he says, “to areas that would have been handled by their original owners — the finger holes in the palettes, the handles of the painting boxes.” He then transferred any microbes the swabs may have captured into petri dishes prepared with nutrient agar, meant to foster growth. “There are documented examples of microbes lying dormant for thousands of years to be revived into healthy colonies.”

Speckles of yeast and various bacteria appeared after just a day. Then the dots “grew into complicated, variegated shapes,” Sasaki says. After four or five days total, the dishes were ready to begin photographing. He selected the examples most reminiscent of landscapes and looked for attributes within the petri dishes that recalled the artist’s work. The Lismer, for example, is dappled with rose-coloured pebbles and boughs of evergreen; the Harris seems to show a winter scene, just after the first big snowfall has quieted Algoma’s colours.

“If the Group of Seven’s project was to chart a connection between nature and identity,” Sasaki says, “I think this relationship also resides on the micro level.” The many organisms of our body’s microbiome assist with digestion, bolster our immune system and likely influence mood, behaviour, and even decision-making, the artist explains. “They, to a large degree, help make us who we are.” 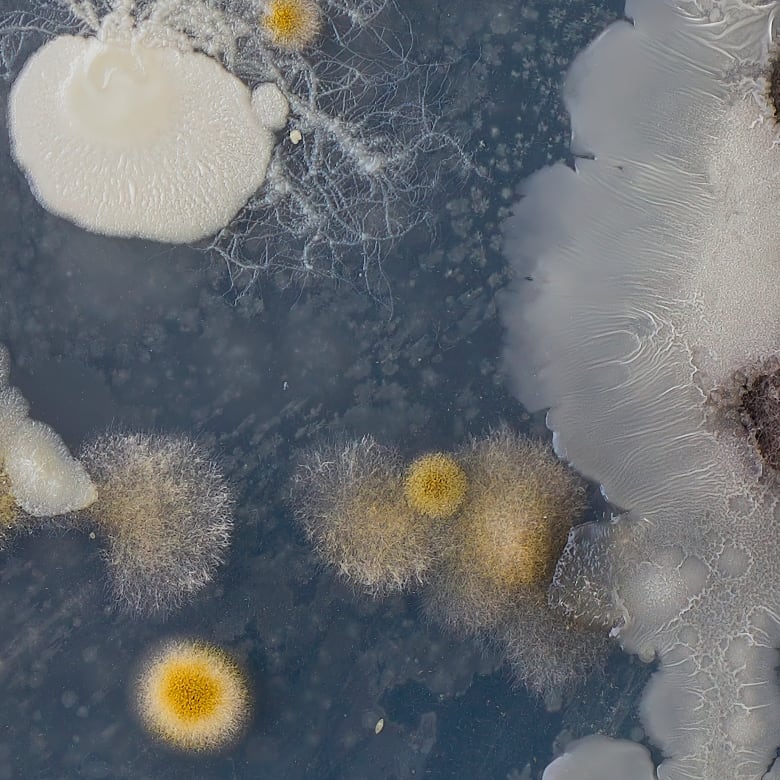 Where the Group looked to the vastness of nature to say something about our character, Sasaki peeks into the infinitesimal and finds emotions just as big. “For me, the microbial world is every bit as awe-inspiring as a majestic wilderness landscape,” he says. “It’s equally full of mystery and wonder, terror, malice and benevolence.”

It is not meant as barb or slight, then, when Sasaki likens the Group’s iconic vision to something bacterial. “Homage” recognizes the tremendous impact of the Algonquin School, the way those painters encultured our national image, as well as their lasting influence even a century on. It celebrates them. Of course, it also suggests something bigger: that cultures — whether inside the petri dish or outside of it — do grow and evolve.

Jon Sasaki: Homage is on view at the McMichael Canadian Art Collection through September 26.