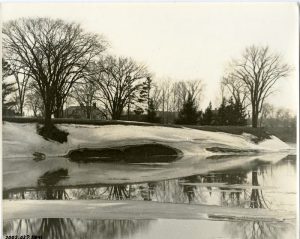 April 27, 2015, KLEINBURG ON—For the second year, the McMichael Canadian Art Collection is partnering with Scotiabank CONTACT Photography Festival, the world’s largest photography event, and is a premier site for the Festival. From April 18 to August 16, 2015, the McMichael presents the exhibition The Photographs of Frank (Franz) Johnston, curated by Sharona Adamowicz-Clements, McMichael Assistant Curator, Collections, and Neil David MacDonald, Owner of Rare Photo Gallery. The exhibition is the first major display of Johnston’s photographic images.

Frank Johnston (1888-1949) – commonly known as Frank, and later as Franz – was a founding member of the Group of Seven. He held a deep passion for representing Canada’s majestic landscapes and its True North, not unlike other members of the Group. Few are aware that Johnston was an avid photographer. He was attracted to the camera’s unmatched ability to instantly and accurately record compelling views and fleeting moments that might otherwise be lost to the human eye or the painter’s sketch brush. Johnston took his camera with him on many of his en plein-air sketching trips. Over the years, he amassed a large collection of photographs, which are now held in various private and public collections.

“I’m excited about this exhibition!” said Dr. Sarah Stanners, Director of Curatorial and Collections at McMichael. “The material on display is revelatory and will surely provide new paths of research into the life and work of Frank Johnston.”

The exhibition marks an early stage of research into the role of photography in Johnston’s creative output. It is the first public exhibition to focus on the artist’s relatively unknown body of work in photography. This exhibition aims to examine Johnston’s photographic work, first as source material for his finished canvases, and second, as artworks in their own right.

The photographs here were largely taken in the 1930s and 1940s. When juxtaposed with Johnston’s paintings, the photographs help elucidate his artistic methodology, demonstrating his reliance on the camera to either guide him “judiciously” in his painting or enable him to create painted copies of the original photographs. This focus on Johnston’s photographic eye also sheds light on his stylistic evolution from an early post-impressionistic bent into a painter whose work became increasingly realistic. Added Stanners, “The Photographs of Frank (Franz) Johnston presents the photographic eye of a Group of Seven painter, prompting more than a few double-takes between paint and print.”

Many of the photographs are print enlargements that were evidently developed with intentions to create objects of art rather than reference guides for later paintings. They are celebrations of landscape in the medium of photography. The photographer’s playful experimentation is revealed in the picture-taking and development processes.

This exhibition restores photography to its rightful place in Johnston’s practice so that we can better understand the development of his art. By bringing into view a side of the artist that was, until now, relatively unknown, we can re-introduce Johnston as a painter-photographer.

Exhibition curator Sharona Adamowicz-Clements will explore Johnston’s photographs vis-à-vis his paintings, as visual aids to his finished canvases and as artworks in their own right, re-introducing Johnston as a painter-photographer. Included with gallery admission. Registration required. Call 905.893.1121 ext. 2209, email bookings@mcmichael.com or visit mcmichael.com for more information.

CONTACT fosters and celebrates the art and profession of photography with an annual Festival in May and year-round programming in the CONTACT Gallery.

The McMichael Canadian Art Collection is an agency of the Government of Ontario and acknowledges the support of the Ministry of Tourism, Culture and Sport, and the McMichael Canadian Art Foundation. It is the foremost venue in the country showcasing the Group of Seven and their contemporaries. In addition to touring exhibitions, its permanent collection consists of over 6,000 artworks by Canadian artists, including paintings by the Group of Seven and their contemporaries, as well as First Nations, Métis and Inuit artists. The gallery is located on 100 acres of northern landscape and hiking trails at 10365 Islington Avenue, Kleinburg, north of Major Mackenzie Drive in the City of Vaughan. For more information: mcmichael.com.