Skip to content
Previous Next
The Sobey Art Collection

Exhibition reveals stories behind one of the country’s largest private collections.

Donald Sobey, the Nova Scotia grocery store titan and art philanthropist, amassed a star-studded collection of Canadian art dominated by Cornelius Krieghoff, the Group of Seven, Quebec Impressionists and other artists that, today, might be considered conservative enough for a corporate board room.

Yet Sobey, who died last year at age 86, also had a daring streak in his artistic taste, as demonstrated by his devotion to Kent Monkman, a Cree artist originally from Manitoba whose drag persona, the high-heeled Miss Chief Eagle Testickle, sashays through dozens of monumental history paintings that are simultaneously tragic and cheeky.

Sobey, the patron, and Monkman, the artist, met in 2009 and became friends, sharing “an irreverence and humour that was world class,” says Bernard Doucet, executive director of the Sobey Art Foundation.

Sarah Milroy, the chief curator of the McMichael Canadian Art Collection near Toronto, agrees with Doucet. “I think Don really respected Kent’s sense of humour,” she says, “but also the advancement of the conversation between settler and Indigenous peoples.” 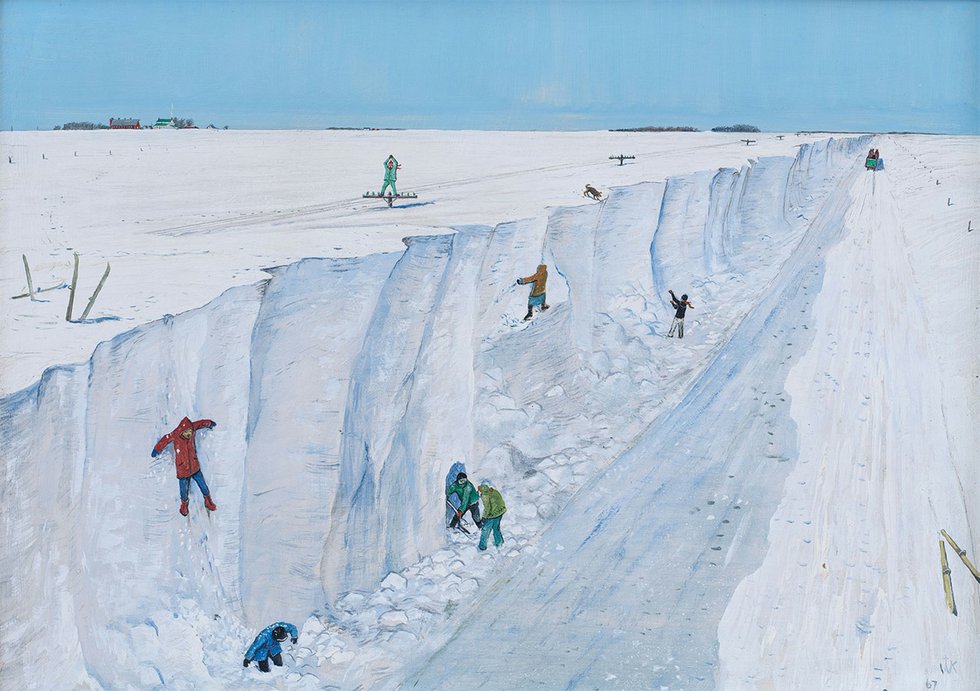 Milroy organized the nationally touring exhibition Generations: The Sobey Family and Canadian Art, on view until May 23 at the McMichael, and then touring the country for the next two years, including a stop at the Art Gallery of Alberta in Edmonton from Feb. 18 to May 14, 2023.

Among the contemporary works are five offerings by Monkman, including studies for the two paintings commissioned by New York’s Metropolitan Museum of Art and financed by the Sobeys: Study for “mistikôsiwak (Wooden Boat People): Resurgence of the People,” (Final Variation), 2019, and Study for “mistikôsiwak (Wooden Boat People): Welcoming the Newcomers,” (Final Variation), 2019. The paintings provide an alternative history to the first meetings between settlers and Indigenous peoples in North America.

“I felt a real connection with Donald Sobey … his generosity, kindness, sensitivity, his compassion,” Monkman says in the catalogue for Generations. “He was very funny, very brilliant, very humble. He appreciated what I was trying to say, the level of skill that he saw, and I respected him for his vision.” 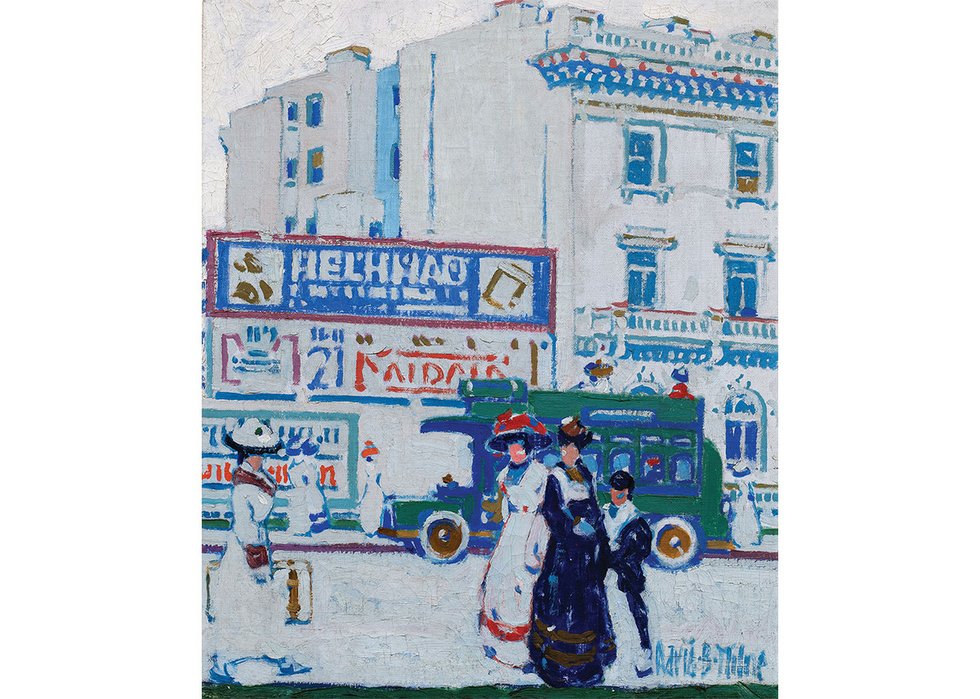 Indeed, Sobey was a visionary. Twenty years ago, he created the Sobey Art Award, which, initially, was a competition for young, emerging artists but is now open to all ages.

“He understood the artists of the past,” says Milroy. “He had a deep allegiance to them, but he also understood Canadian art as being made right now today and we need to foster these artists to have an art history.”

Generations includes works from three Sobey award winners, all Indigenous – from British Columbia, a Brian Jungen running shoe sculpture; an installation by Nova Scotia’s Ursula Johnson; and three coloured-pencil drawings by the late Inuit artist Annie Pootoogook. Other contemporary Indigenous artists in Generations are Brenda Draney, an Edmonton-based artist who was on the 2013 Sobey award long list, and Joseph Tisiga, of Whitehorse, who shared the 2020 Sobey with 24 other artists. 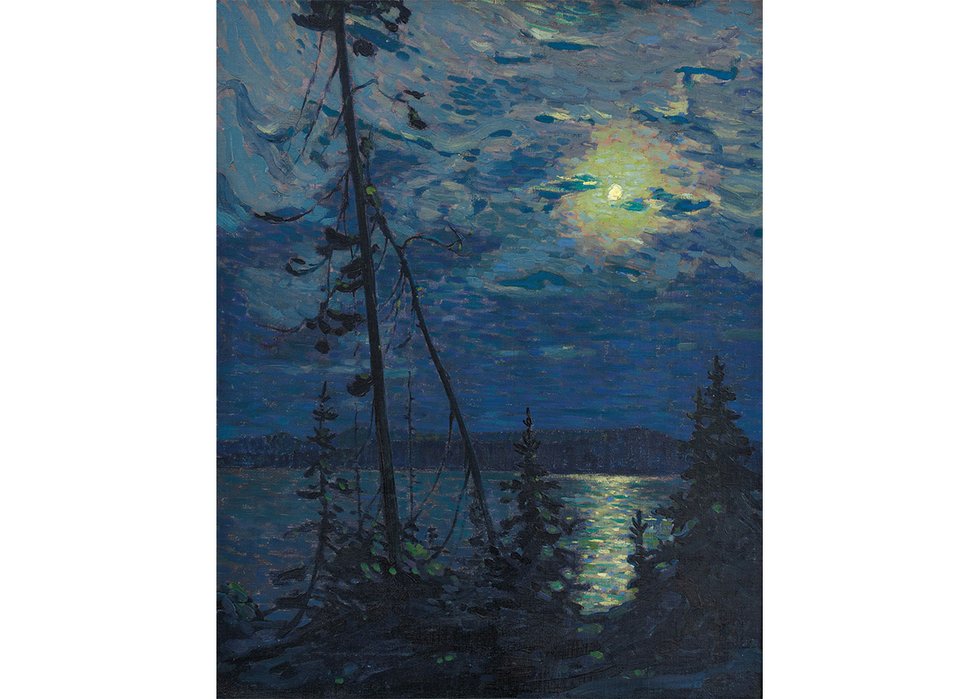 Sobey, who could have decorated his office with such masterpieces as Tom Thomson’s Moonlight, circa 1915, or Emily Carr’s Spring, circa 1930s, instead chose two of Pootoogook’s humble drawings, Family in Kitchen, 2006, and Watching Television, 2003-4. Both show domestic scenes in Inuit homes where traditions co-exist with imports from the South. Both drawings are owned by Donald’s son, Rob, whose tastes are more contemporary than his father’s. Many of the contemporary works in Generations are from Rob’s personal collection.

Generations reflects the interests of various Sobeys. The family never intended to build a collection representing all media or styles. There are no photo-based works, few abstracts, few Western Canadian artists and few women. 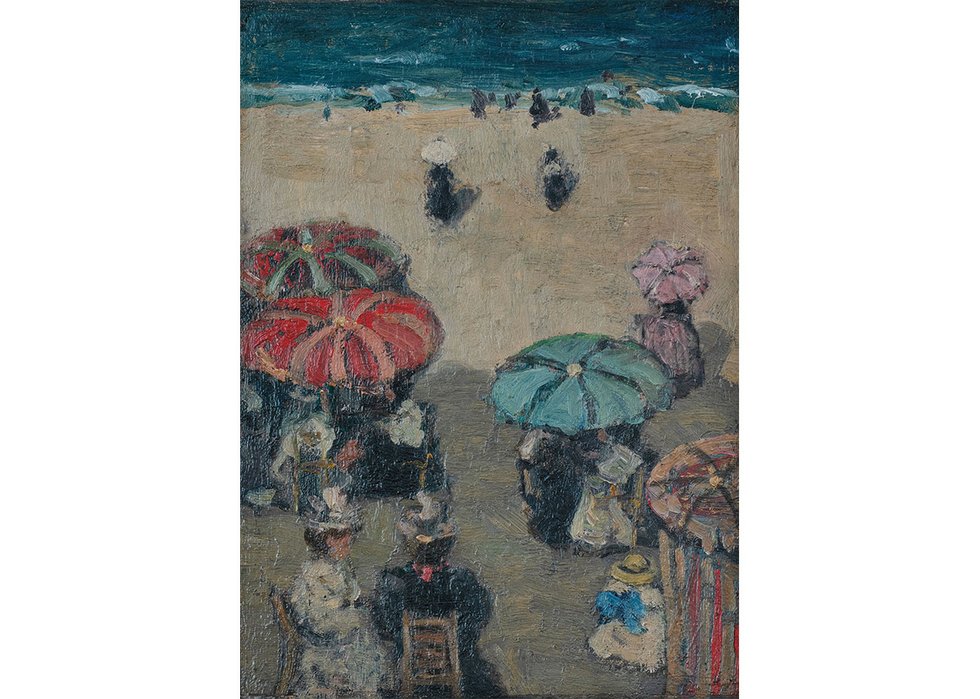 Doucet says Donald Sobey’s two favourite artists were Morrice, a Quebec-based post-Impressionist from a century ago, and Monkman. Thematically, adds Doucet, Sobey loved a painting that told a story.

“He was fascinated to look at things and interpret the narrative, the story behind it, the ‘why’ of the painting, in some cases the social and political and historical references in the painting,” says Doucet. “This was always very important for him.” 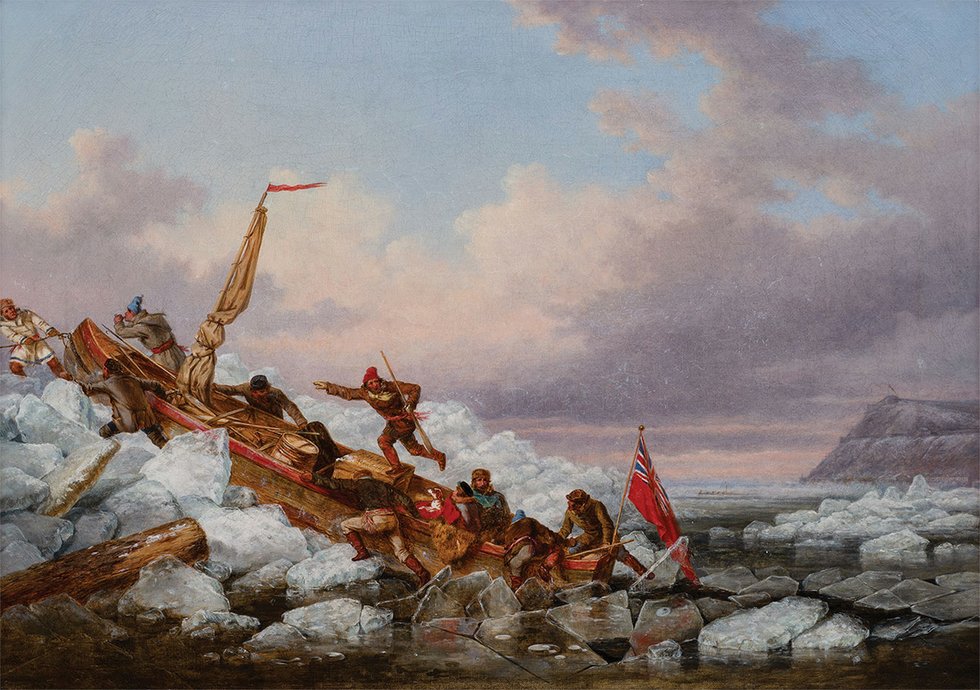 Cornelius Krieghoff, “Crossing the St. Lawrence with the Royal Mail at Quebec,” 1859, oil on canvas, 17″ x 24″ (collection of the Sobey Art Foundation)

This love of storytelling helps explain his great love for Krieghoff, whose romantic, idealized paintings often depict Quebec habitants engaged in everyday activities. Likewise, his devotion to Kurelek, whose paintings depict Prairie immigrants at work or at play, and Jean Paul Lemieux, a painter of starkly nostalgic paintings of Quebec’s bygone days.

One room at the McMichael, where Generations opened Feb. 12, is devoted to such storytellers, including Kurelek, Pootoogook and Alex Colville. The Colville painting is one of the artist’s lesser-known works, Roadwork, 1969. Milroy says those artists all offer “informed observation of daily life.” 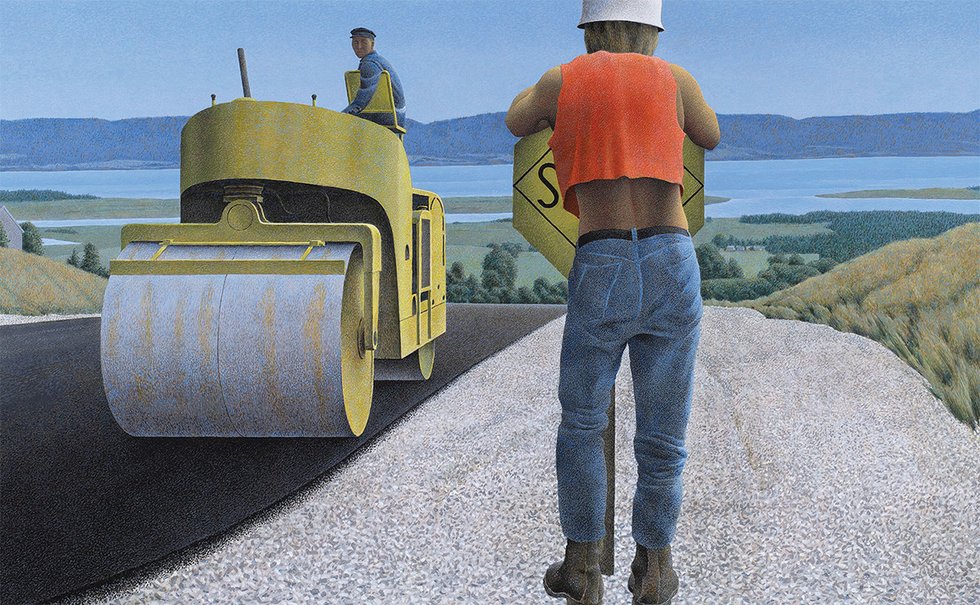 Another room is largely devoted to 25 Krieghoffs and yet another to conflict in the North Atlantic. That’s where you will find everything from Monkman’s maritime scenes to Arthur Lismer’s First World War battleships and a Christopher Pratt lighthouse, Ferolle Point Light, 1998.

The exhibition includes only one non-Canadian artist – Peter Doig, who was born in Britain but spent part of his childhood in Canada. His early works exploring the Canadian outdoors were nicknamed “the Group of Seven on acid.” Doig’s paintings sell for millions of dollars. Three are in the exhibition, all from the 1990s, including the eerie Figure in Mountain Landscape, inspired by a 1930s’ photograph of Group of Seven artist Franklin Carmichael sketching outdoors.

“It was Peter’s work that introduced Donald to themes and styles in contemporary art Donald felt he could relate to,” says Doucet.

Doig’s paintings had an impact on Sobey, who established the Sobey Art Award in 2002 to celebrate contemporary art. That new understanding helped the Kreighoff disciple widen his horizons to include Monkman’s campy alter ego, Miss Chief Eagle Testickle.

Generations: The Sobey Family and Canadian Art at the McMichael Canadian Art Collection in Kleinburg, Ont., from Feb. 12 to May 23, 2022.