Skip to content
Previous Next
The top 10 artworks of 2020: the most stunning and startling exhibitions at Canadian galleries and online this year

The top 10 artworks of 2020: the most stunning and startling exhibitions at Canadian galleries and online this year

The top 10 artworks of 2020: the most stunning and startling exhibitions at Canadian galleries and online this year

Kate Taylor picks the top 10 most beautiful, surprising or impressive things she saw in galleries, museums and online art exhibitions this year – in no particular order

It’s rare to see Toronto romanticized in art, but Keita Morimoto’s Garden of Light, which showed at the Nicholas Metivier Gallery in February, turns an undistinguished section of the growing city into the stuff of Old Masters. Based on photographs shot from a building rooftop and looking eastward across the downtown, the large-scale triptych paints the skyline at three stages of night as Morimoto meticulously reproduces every condo tower and street light. One of the most spectacular items in the Royal Ontario Museum exhibition The Cloth That Changed the World is this 18th-century palampore.

This exemplary exhibition devoted to chintz is filled with lovely things and revealing facts about how India’s technical improvements in dyeing cotton produced a global trade. Among the most spectacular items is an 18th-century palampore, a wall or bed hanging, donated to the ROM from the Harry Wearne collection. It features a central motif of a flowering tree with feathery leaves delineated in soft blues, reds and greens. 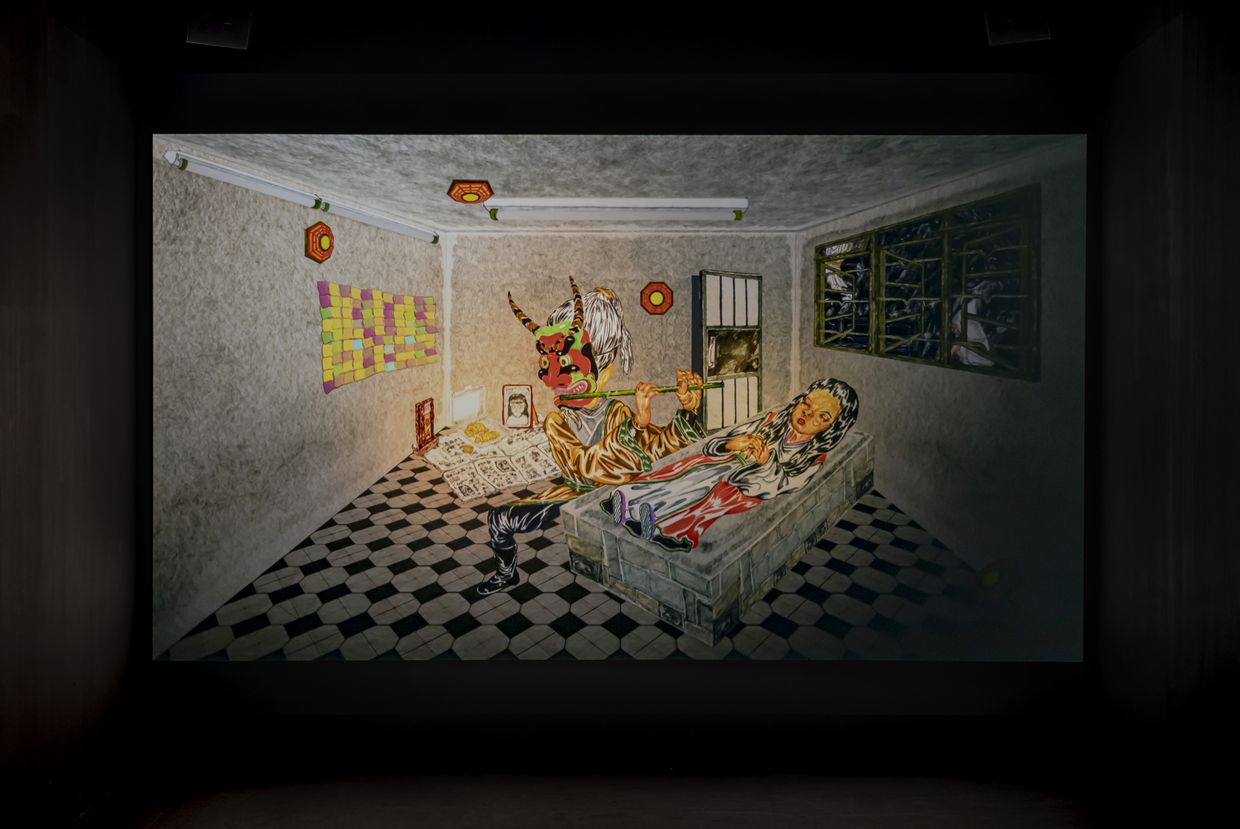 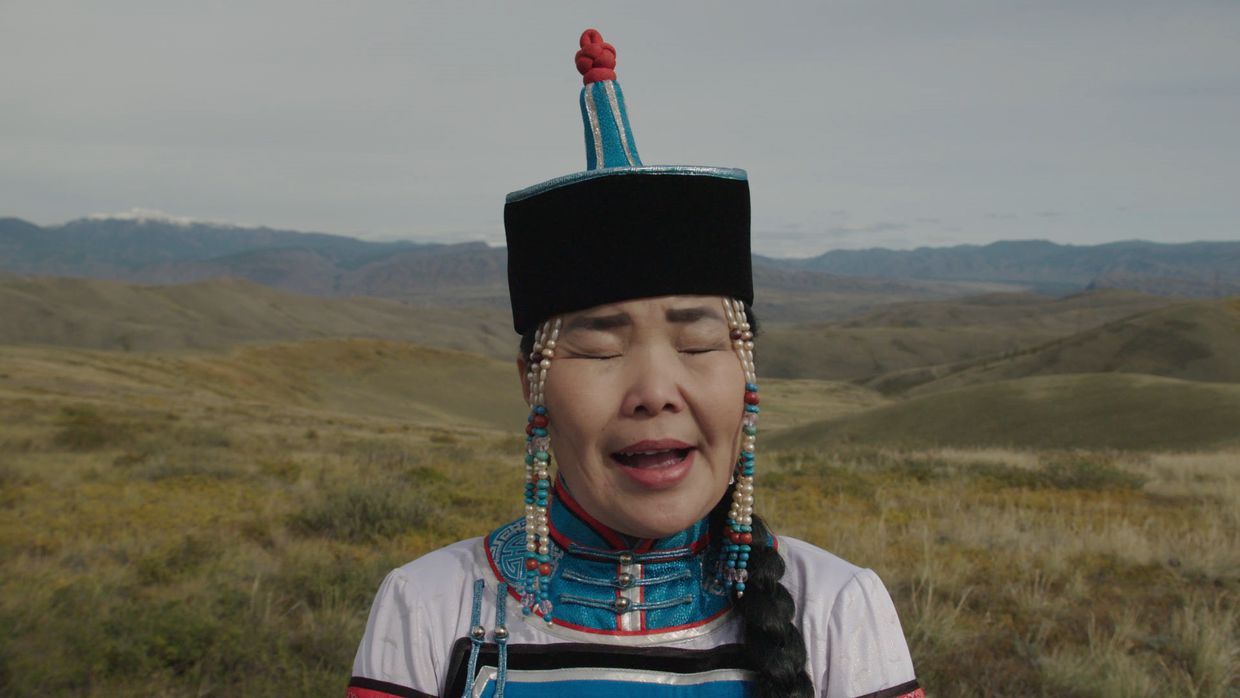 What is that luridly coloured cylinder of some gelatinous substance, and why is somebody slicing and melting it? That is just one hilariously bizarre motif in the film Spaghetti Blockchain, showing at the Museum of Contemporary Art – Toronto. In her film installations, New York artist Mika Rottenberg satirizes consumption and globalization with images of surfeit that, once seen, cannot be unseen. 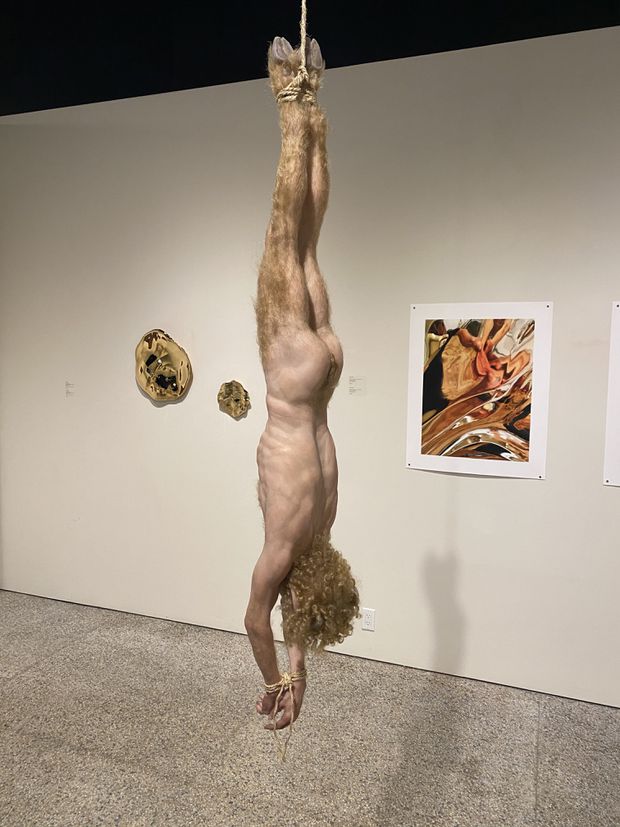 Another thing difficult to unsee is Evan Penny’s Hanging Marsyas, a small-scale but otherwise shockingly realistic sculpture of a male figure hanging upside down. It was displayed in the booth created by Calgary’s Trépanier Baer Gallery for a pop-up mini art fair organized by the Stephen Bulger Gallery for Art Toronto in October. The figure, very human but with cloven hooves, is taken from the Greek myth of the satyr, which challenged Apollo to a musical contest and got flayed alive for his efforts. This hanging creature is about to be skinned. 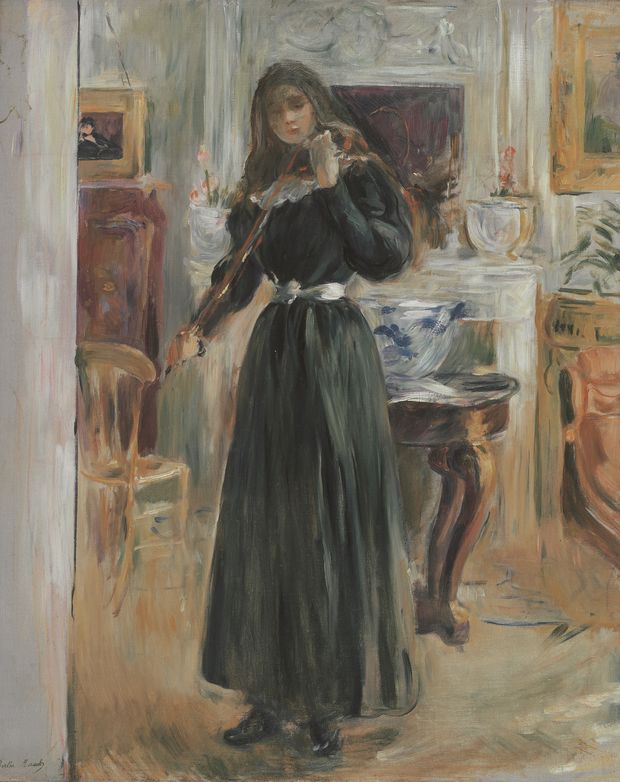 Berthe Morisot’s 1893 work Julie Playing a Violin was displayed at Paris in the Days of Post-Impressionism: Signac and the Indépendants at the Montreal Museum of Fine Arts. HANDOUT

At the Montreal Museum of Fine Arts, the exhibition Paris in the Days of Post-Impressionism: Signac and the Indépendants offered a bumpy ride through the secondary movements of French art. But it also included many fine paintings, of which my favourite was Berthe Morisot’s 1893 portrait of her daughter, Julie Playing a Violin. In this restrained yet heartfelt consideration of art and motherhood, the girl’s plain black dress anchors her figure in the bourgeois setting provided by her cultured family. 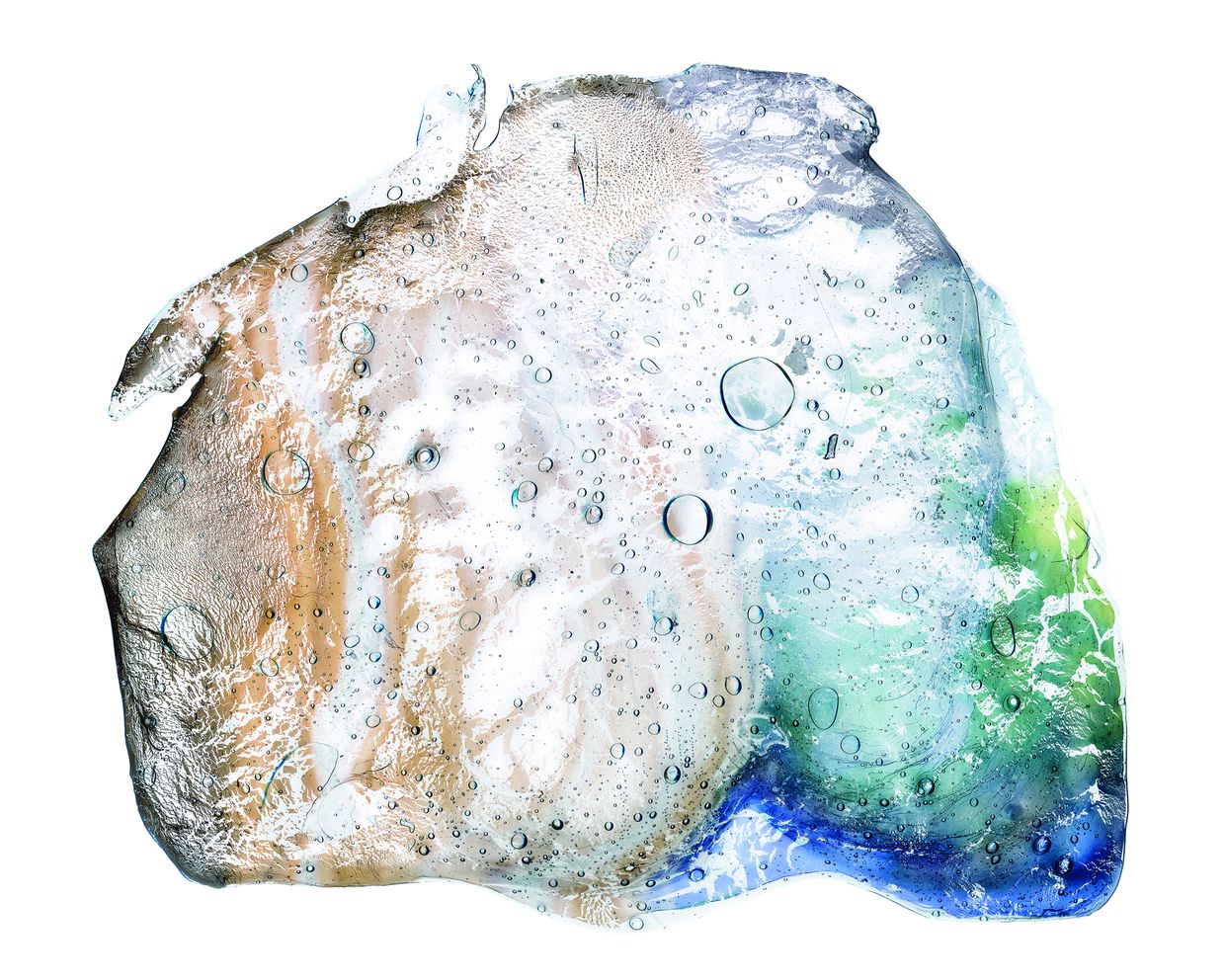 Megan Moore’s View from a window in Rosemere, May 2003, part of her Specimens series. MEGAN MOORE

To create her Specimens series, Montreal artist Megan Moore chemically alters her own photographs to partially dissolve their surfaces then rescans them. Serving as a metaphor for the instability of memory itself, the process produces intriguingly unidentifiable aquatic blobs. The Robert McLaughlin Gallery in Oshawa, Ont., presented a collection of them last spring, but the borderless photographs are also well suited for an online exhibition, which was how I saw them during May’s Contact photography festival.

Ottawa photographer Jennifer Dickson finds beauty and calm in ecclesiastical architecture. Her February exhibition at the Ottawa Art Gallery included Credo Nineteen, Credo Twenty and Credo Twenty-One, a trio of photographs juxtaposing a Turkish mosque, a Spanish synagogue and a Portuguese church. You could read an ecumenical message into her choices or simply appreciate the way the photographer frames these timeless spiritual spaces.

9. Untitled sculpture based on a wampum belt, Nadia Myre 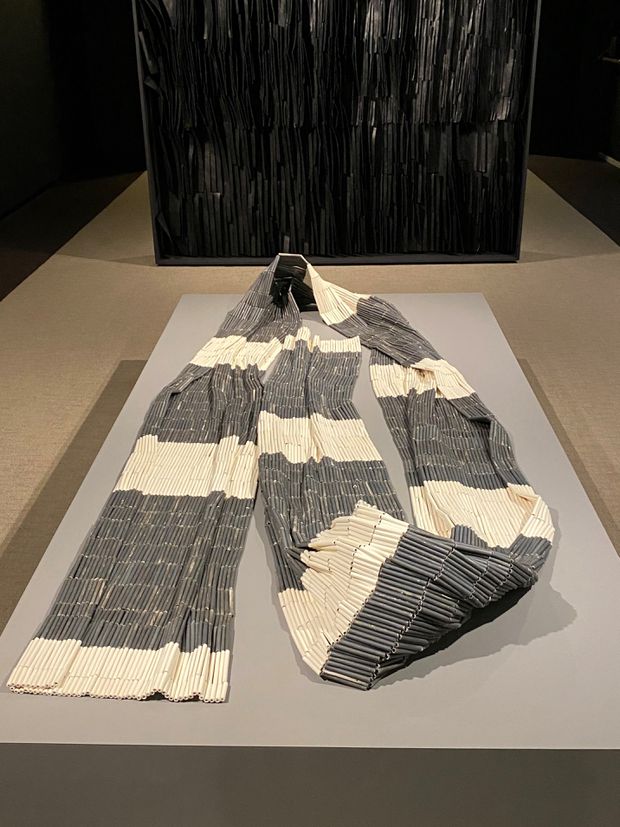 This Nadia Myre work, displayed at the McMichael Canadian Art Collection in Kleinburg, Ont., is not a wampum belt but a sculpture meant to evoke the wampum belt form. MCMICHAEL CANADIAN ART COLLECTION

Algonquin artist Nadia Myre has been working in clay recently, inspired by the pipes that European colonizers once brought to this continent. One of her latest pieces is an over-sized representation of a wampum belt made of alternating white and grey clay beads carefully threaded together on wire to create a twisting modernist sculpture. At the McMichael Canadian Art Collection in Kleinburg, Ont., it is draped across a low plinth, part of a current show devoted to the museum’s Indigenous art. The sculpture’s solid, contemporary presence is particularly poignant because it is being compared to small and rare historic beaded belts from First Nations of the Great Lakes. 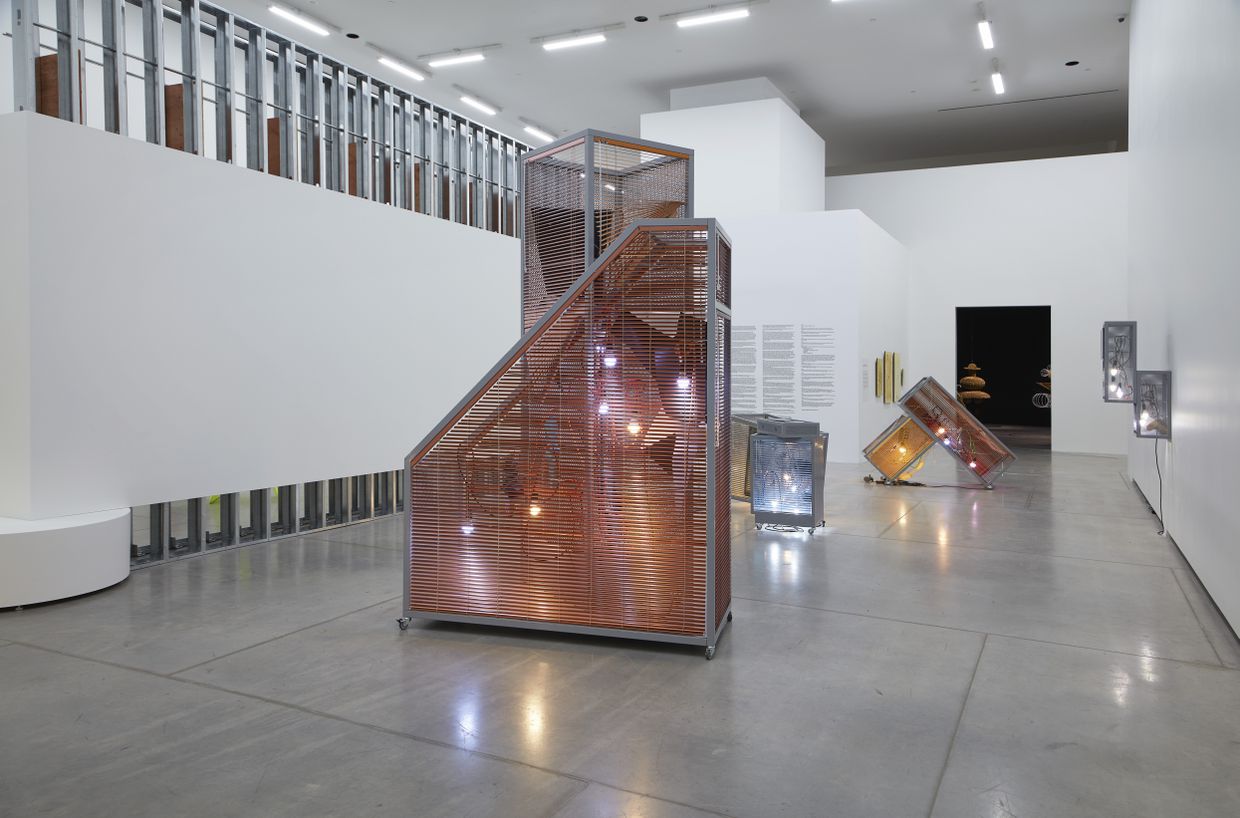 Doubles and couples – Version Turin is part of Emergence, an exhibition of work by Korean artist Haegue Yang at the Art Gallery of Ontario. CRAIG BOYKO/AGO

In the weeks after a visit to Emergence, a current show of work by the Korean artist Haegue Yang at the Art Gallery of Ontario in Toronto, my mind kept returning to the concept of Doubles and couples – Version Turin. In the piece, the artist creates simple structures of metal frames filled with Venetian blinds and light bulbs to reproduce scale pairs of corresponding appliances from her Berlin and Seoul apartments. The work’s consideration of globalism, domesticity and the concept of home felt particularly apt as the city went back into lockdown.