September 3, 2015, KLEINBURG ON—Colour of the River Running Through Us, conceived by multi-disciplinary visual artist Thom Sokoloski, has had its stay on the grounds of the McMichael Canadian Art Collection extended until October 18.

James Adams of The Globe and Mail describes Colour of the River Running Through Us as “…a delightful outdoor installation…(which) invites a play of associations, eliciting more and more the longer your mind and body wade in its currents.” The Art Canada Institute also expresses that, “Thom Sokoloski is a Tom Thomson for the twenty-first century.”

Visitors engage in a creative ceremony with the artwork by exploring the ravine, participating in movement meditations choreographed by Jenny McCowan, and writing haiku poems inspired by river water. The haiku poems are then placed within the memory vessels of the river sculptures. A free manual is provided to inform and guide visitors through the artwork.

“I am thrilled to have my artwork at the McMichael extended into autumn, as more visitors will have the opportunity to freely engage in movement meditations and write haiku poems,” said Thom Sokoloski. “Over a thousand personal haikus have been deposited into the sculptures to date, and with autumn approaching its colourful transformation in sight and sound, the artwork’s ceremonial nature will be enhanced.”

As part of Colour of the River Running Through Us, the McMichael ravine becomes a “river” for an amassed flotilla of thirteen canoe-inspired sculptures hovering above visitors. An avid canoeist himself, the vision for Sokoloski’s installation is influenced by the exploration and settlement of Canada through the waterways established by First Nations, then introduced in the 1600s to Champlain and the Voyageurs, as well as the Jesuits. Today, as then, the canoe and its relationship with water plays a unique role in forming and defining the Canadian imagination.

Conceived specifically for the natural setting of the McMichael, the materials which make up the thirteen freestanding sculptures of Sokoloski’s work all have an association with water, including the tripod, its pulley systems and vessels used to dig and retrieve well water, and the shapes and forms of canoes and dugouts. Upon entering the installation, the artist suggests the sensation of being surrounded by the river that flows above, below and through us.

“There have been many inspiring poetic responses from visitors to Colour of the River Running Through Us,” said Anna Stanisz, Associate Director of Creative Learning and Programs at McMichael. “One poem reads, ‘riverbed shadow/ spirit mingles with nature/ birds circle above,’ while another reads ‘glacial waters rush in April/ feet stumble on rolling stones/ river resists my crossing.’ If you have yet to see this artwork, make sure to bring your family and friends to the McMichael and participate in this incredible outdoor installation before it is gone.” 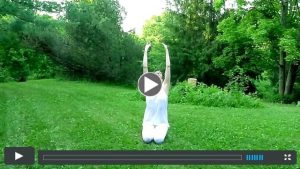 Over the past decade Sokoloski has expanded his innovative practices through the creation of large-scale public art installations. The Encampment, first commissioned by Scotiabank Nuit Blanche in 2006 has been presented in Toronto, New York City, and Ottawa, and at the 2012 Luminato Festival. This followed with a residencey at Socrates Sculpture Park in Queens, NYC and a commission for Art Toronto 2013 to create All The Artists Are Here. In development is a new public art installation for Four Freedoms Park in New York City and Ghost Net. He has curated for Art Toronto, Contact, Scotiabank Nuit Blanche, the Distillery Historic District, and Propeller Centre for the Visual Arts.

Alfred was born in Malta but grew up in Toronto. Although he attended Ryerson and Ontario College of Art for photography and film, it was not until he saw the Glass America Now at MOMA in New York City that glass art was it for him. Over the years he has become one of Canada’s most revered glass artists. He was part of the driving force at the Geisterblitz Glass Studio to make glass blowing into public participatory events. He taught at OCA, now OCADU, as well as sitting on Public Art Commission of Toronto, Ontario Crafts Council, Glass Art Association, Canadian Clay and Glass Gallery, among others. For Scotiabank Nuit Blanche 2012 in Toronto, Engerer’s experience-driven installation of hand-blown neon tubes and found neon signage was suspended within the canopies of several trees at First Canadian Place Park in the heart of Toronto’s financial district.

Jenny has worked and collaborated with Thom on all of his larger works, including The Encampment, The Scarecrows, The River Peace, and Ghost Net. She is an established choreographer whose work has been presented by Anandam Dancetheatre and Scotiabank Nuit Blanche. She has also worked for artists such as Terrence Koh at the McMichael in 2014 with Luminato. In addition to being a registered teacher with the York Region District School Board, she is also the Education Director for the Magenta Foundation in Toronto, Boston, and Pittsburgh.

Evan collaborates on the design aspects of Thom’s works, from 3D modelling to structural engineering. He is a registered architect and teaches at Ryerson University’s School of Architectural Design as well as being a film production designer, presently working on the acclaimed Hannibal television series.

The McMichael Canadian Art Collection is an agency of the Government of Ontario and acknowledges the support of the Ministry of Tourism, Culture and Sport, and the McMichael Canadian Art Foundation. It is the foremost venue in the country showcasing the Group of Seven and their contemporaries. In addition to touring exhibitions, its permanent collection consists of almost 6,000 artworks by Canadian artists, including paintings by the Group of Seven and their contemporaries, as well as First Nations, Métis and Inuit artists. The gallery is located on 100 acres of northern landscape and hiking trails at 10365 Islington Avenue, Kleinburg, north of Major Mackenzie Drive in the City of Vaughan. For more information:mcmichael.com.