New categories of artists are occasionally invited into the Canadian art establishment.

At Confederation in 1867, white male artists were usually the only people to exhibit in serious galleries and become members of such select organizations as the Royal Society of Canada.

That began to change in the early 20th century, when white settler women started making breakthroughs, despite the patronizing and sexist attitudes of art critics and male contemporaries. Generally, however, those women had to live in Toronto or Montreal and, like their male counterparts, follow the lead of artists in England or France or Canada’s own Group of Seven. 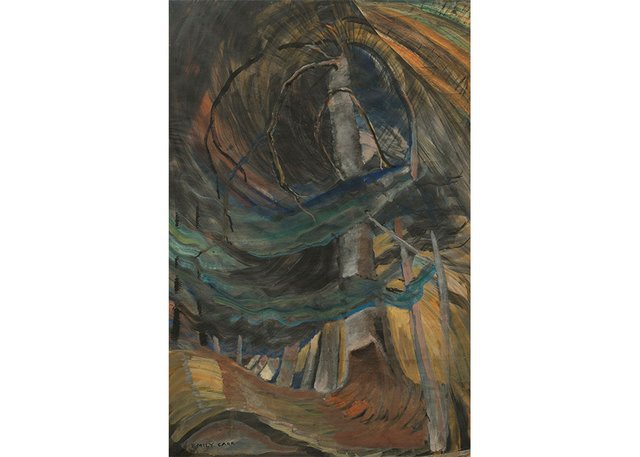 Indigenous artists, male or female, waited much longer to be invited. Black artists are now being invited in greater numbers as both curators and creators. But many Canadian artists with roots in Asia, the Middle East or Latin America are still awaiting invitations.

This phenomenon of the “uninvited” is explored in a new touring exhibition and its accompanying lavishly illustrated catalogue. Both are called Uninvited: Canadian Women Artists in the Modern Movement and come courtesy of the McMichael Canadian Art Collection in Kleinburg, Ont. The exhibition is scheduled for the Glenbow Museum’s temporary exhibition space in Calgary from Feb. 19 to May 8 and then travels to the Winnipeg Art Gallery, where it’s slated to open June 18. 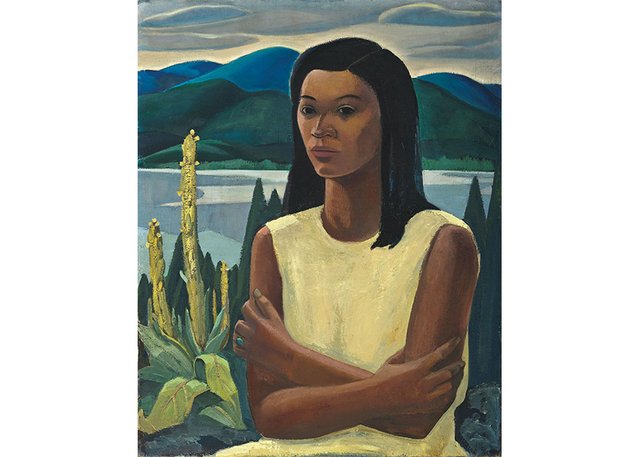 The idea for Uninvited was born a few years ago when the McMichael was planning celebrations for the Group of Seven’s 100th anniversary in 2020. An exhibition honouring the Group’s all-male members, A Like Vision: The Group of Seven at 100, opened in January 2020 and continues until September 2022. And starting Sept. 10, the McMichael opens an exhibition honouring women who were not invited to become part of the Group. It’s a long list. 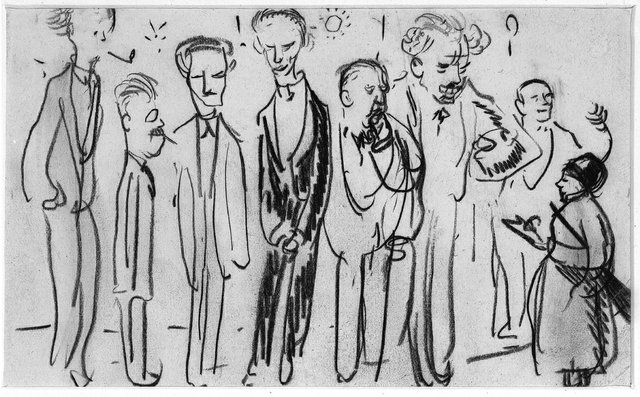 Arthur Lismer, “Emily Carr and the Group of Seven,” circa 1927, conté crayon on paper, 4″ x 6″ (gift of The Robert and Signe McMichael Trust)

While the men of the Group of Seven did invite several women to exhibit alongside them, none were invited to become part of the select club, even painter Anne Savage or sculptor Elizabeth Wyn Wood, whose vision and aesthetics were close to that of the Group.

The Uninvited project was stickhandled by the McMichael’s chief curator, Sarah Milroy. She assembled a remarkable list of 31 artists, some now famous and others still largely unknown, for the exhibition and the book, where they are profiled by a variety of scholars. More than 200 artworks, mainly from the 1920s and 1930s, are featured in the book and exhibition. There are also dozens of works by Indigenous women whose names are lost to history. 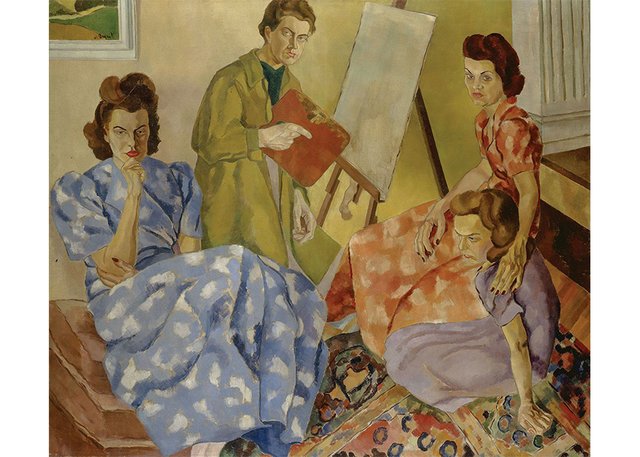 Flipping through the book, one encounters reproductions of some of Canada’s most celebrated century-old paintings, as well as a few sculptures and photographs. The dramatic figurative paintings of Prudence Heward, including At the Theatre, 1928, Rollande, 1929, and Sisters of Rural Quebec, 1930, are unforgettable. Heward was one of nine women amongst the 28 founding members of the Canadian Group of Painters, an organization formed after the dissolution of the Group of Seven. Other members included Emily Carr, Anne Savage and Sarah Robertson.

It’s like greeting old friends as one drinks in familiar paintings by Emily Carr, Marian Dale Scott, Pegi Nicol MacLeod, Yvonne McKague Housser, Lilias Torrance Newton and Paraskeva Clark, as well as photographs by Margaret Watkins and sculptures by a twosome known as “the girls” – Frances Loring and Florence Wyle. These artists, in varying degrees, were eventually invited into the art establishment. 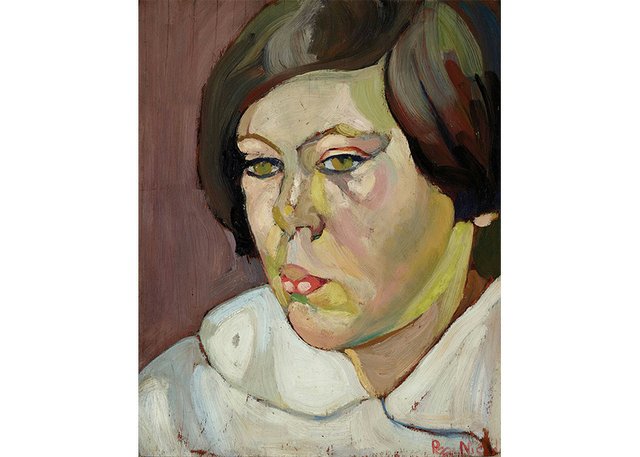 Art lovers in Canada have undoubtedly heard of Group of Seven members Lawren Harris and Frederick Varley. But did you know Harris’s wife, Bess Larkin Housser Harris, and Varley’s love interest, Vera Weatherbie, were also accomplished artists? We meet both these B.C. women, and their work, in Uninvited.

Among the artists Milroy celebrates is Alberta’s under-appreciated Annora Brown and her studies of Indigenous people. Her watercolours in Uninvited include Tipis at Night, 1935, depicting Niitoy-yiss, or Blackfoot, homes below lenticular clouds that forecast a coming chinook. 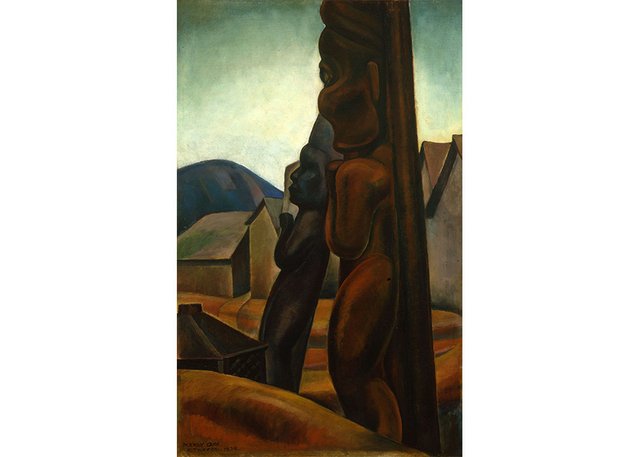 There are also delightful watercolours of Inuit life by Winifred Petchey Marsh who lived in the Arctic with her missionary husband and collected splendid examples of Inuit art now housed in the Manitoba Museum. Among Marsh’s subjects is the beaded inner coat of an Inuit woman named Attatsiaq, from Arviat, Nunavut, who is introduced to us in Uninvited as an artist in her own right.

Likewise, we encounter the beadwork of an artist, identified only as Mrs. Walking Sun from the Carry the Kettle Reserve in southern Saskatchewan. Around 1940, she created a Nakoda maiden’s dress decorated with white, black, pink, blue, red and yellow beads and cowrie shells fastened on a doeskin hide. She donated the dress to the Red Cross to help with the organization’s efforts during the Second World War. It is now at the Royal Ontario Museum in Toronto.

Indigenous works once considered as craft have, in recent years, been accepted as art in major galleries across Canada. That’s generally not the case for traditional crafts by settler women, who sewed, quilted, crocheted or embroidered works that major galleries still largely avoid. These women are so far down the list they were not even included in Uninvited. 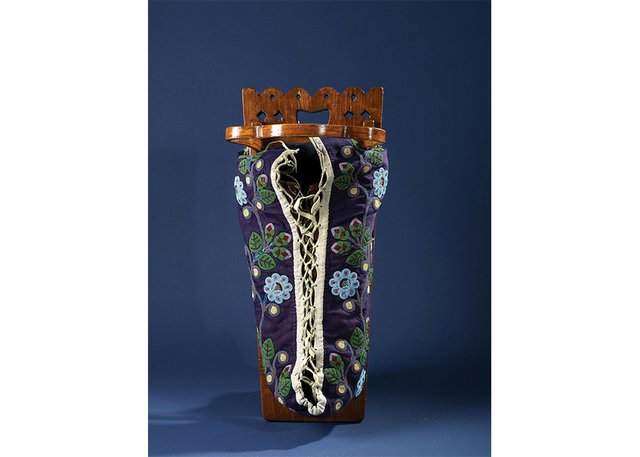 But there are signs that attitudes to such traditional artistry is changing. Consider the national touring exhibition from 2015 and 2016 called The Artist Herself: Self-Portraits by Canadian Historical Women Artists. The exhibition included a quilt from the early 1900s by Maud Darling of Almonte, Ont. The quilt was deemed to be a self-portrait because of the personal story it told – that Darling came from a large family, worked as a dressmaker, loved gardening and belonged to the Daughters of Rebekah service organization.

Marc Mayer, while director of the National Gallery of Canada, penned an essay for the 2017 book Art in Canada, in which he noted that colonial-era nuns in Canada created exceptional Baroque embroidery for the church that was far superior to paintings and sculptures fashioned by male priests. Yet, the embroidery is housed today in history museums while “the cruder handiwork” of the priests is presented in art galleries.