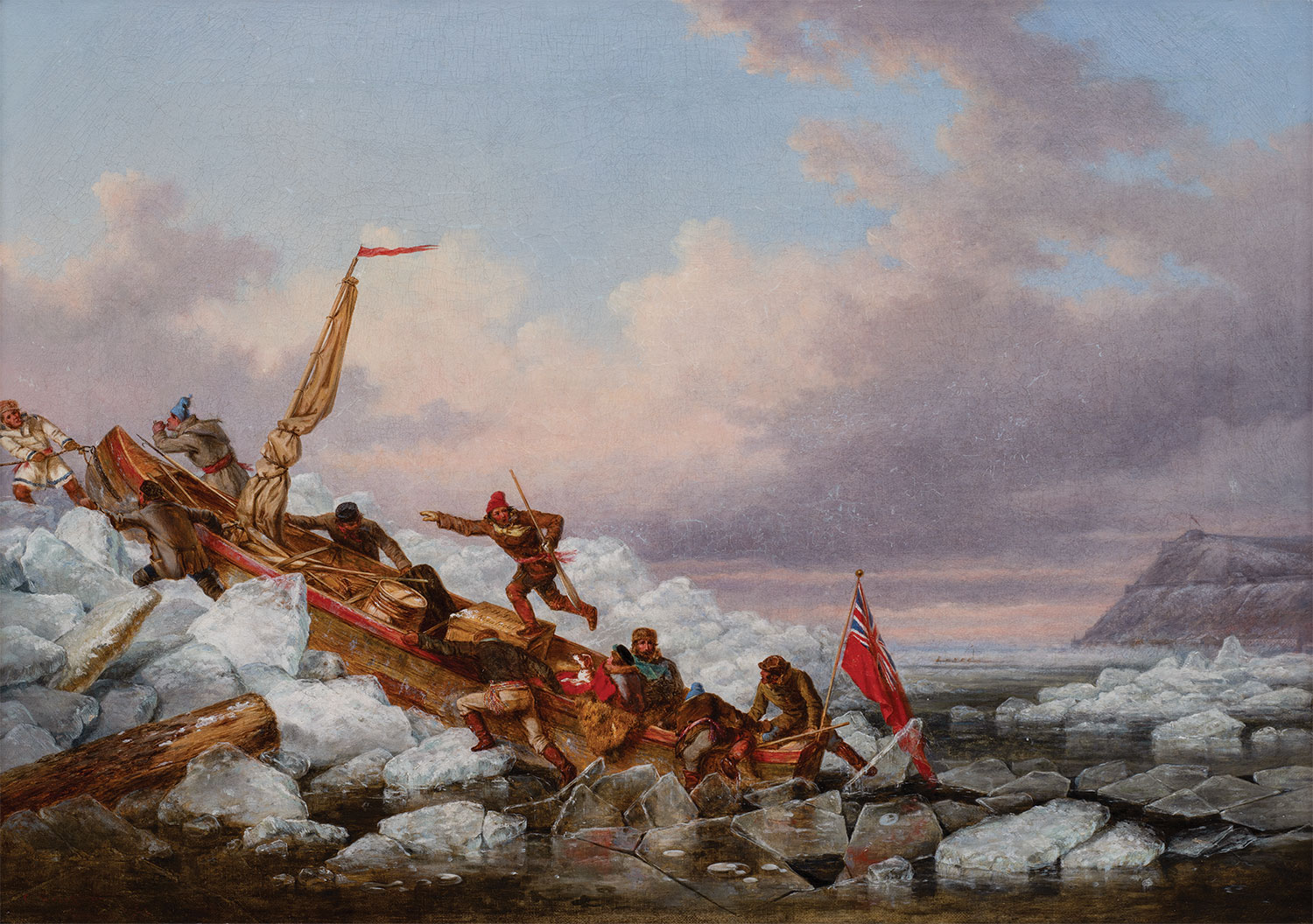 MARCH 24 2022, KLEINBURG, ON – The McMichael Canadian Art Collection is pleased to announce an exciting and diverse 2022–23 exhibition program. Led by Executive Director Ian Dejardin and Chief Curator Sarah Milroy (CM), the McMichael will present invigorating new exhibitions that will introduce Canadians to under-examined artists and movements—including five solo shows by women, and three by Indigenous artists—and cast new light on the past while highlighting the next generation of emerging talent. Interdisciplinary and site-specific installations will activate the McMichael’s exhibition spaces and programming in new ways.

In addition, the McMichael continues to produce a robust slate of virtual and in-person programs, tours, curatorial talks and more, allowing visitors to experience the collection from wherever they are. As we begin to emerge from the global pandemic and Canadians look to the arts for inspiration and meaning, the McMichael will continue to offer a creative oasis of calm and rejuvenation.

Generations: The Sobey Family and Canadian Art tells the story of one family’s visionary engagement with Canadian and Indigenous art, braiding together works by early European newcomers like Cornelius Krieghoff; titans of Canadian 20th century art such as the Group of Seven, Tom Thomson, David Milne and Emily Carr; the Quebec Impressionists, as well as Automatiste painters Jean Paul Riopelle and Paul-Émile Borduas; and works by trail-blazing artists of today, including contemporary Indigenous artists Kent Monkman, Brenda Draney, Brian Jungen and Annie Pootoogook, as well as leading international artist Peter Doig. A recurring theme in the exhibition is the North Atlantic, its role in history as a place of endeavour and of conflict, and its impact on the artistic imagination.

Generations is timed to coincide with the 20th anniversary of the Sobey Art Award, which has had a groundbreaking impact on the visibility and vitality of contemporary artmaking across Canada. This nationally touring exhibition celebrates that milestone, demonstrating the range and depth of the Sobey family’s engagement with Canadian art, and their prescient and visionary leadership in the cultural sector—a gift to Canada like no other.

As one of Canada’s leading painters, Winnipeg-based Wanda Koop has exhibited in galleries across Toronto, Montreal, Los Angeles, New York and Houston during her 40-plus-year career. Koop’s body of work attests to her observations of contemporary life, giving visual form to issues such as climate change, urban living, and Indigenous land claims. Lightworks is an opportunity to catch up with Koop’s most recent production, showcasing a collection of canvases that express colour and light as subjects in themselves. The resulting surfaces seem to glow from within, expressing an ecstatic vision of light and nature inspired by the artist’s recent periods of seclusion near Riding Mountain National Park in Manitoba. The exhibition will also include a number of her more recent Light Sticks — long, thin, shaped works that bear strips of intense colour and pattern, arranged sculpturally in the gallery spaces, highlighting Koop’s breakthrough into the third dimension.

Gathie Falk: Offerings investigates the career of the legendary Canadian artist. Now 94, Falk (B.1928) is of Russian Mennonite heritage and was born in Brandon, Manitoba, settling finally in Vancouver, where she established herself as one of Canada’s most visionary and experimental artists. Flying horses, rows of potted fir trees festooned with blossoms and ribbons, floating cabbages, piles of glossy apples, gentlemen’s brogues presented in reliquary style, expanses of water, or burgeoning flower beds exploding with colour—these have been the manifestations of Falk’s rampant imagination as she has explored the disciplines of painting, ceramic, performance art and installation over the span of a half century. The exhibition will be accompanied by a major publication, including essays by McMichael Chief Curator Sarah Milroy, Vancouver curator and writer Daina Augaitis, and a host of other artists and writers rising to the occasion of this career-spanning survey.

This exhibition presents a meaningful overview of Elisapee Ishulutaq’s (1925–2018) work, including both her ambitiously scaled drawings of daily life in her home community of Pangnirtung as well as scenes of birds in flight, boats at sea, and the dark, star-studded skies of winter. Her bold minimalism and vibrant colour palette marked her as one of Canada’s most innovative artists, celebrated here in the first museum survey of her work. My World features over 30 works on paper in pencil and oil stick.

Dempsey Bob (b.1948) is a Tahltan-Tlingit master carver based in Terrace, British Columbia. Born in Telegraph Creek, he began carving in 1969, and commenced his formal training at the Gitanmaax School of Northwest Coast Indian Art in 1972 under the direction of the famed female carver Freda Diesing (1925-2002). Teaching remains at the heart of his daily life at the Freida Diesing School of Northwest Coast Art, which he co-founded with his two nephews, carvers Stan Bevan and Ken McNeil. Today, Bob is one of the most accomplished carvers on the Northwest Coast, yet Wolves will be his first solo museum exhibition, demonstrating his sophisticated carving style and his striking gift for storytelling in both art and language. The exhibition will be accompanied by a publication, Dempsey Bob: In His Own Voice, edited by McMichael Chief Curator Sarah Milroy, and will include stories from the artist about his life and the cannery culture of the Skeena Valley, his explanations of the works in the exhibition, outtakes from his personal family albums, and extensive photo-documentation of his studio and home community on the Skeena River by editorial photographer Blaine Campbell.

Rajni Perera (b. 1985) is one of Toronto’s most promising rising stars. A mistress of many media — from painting to sculpture to photography — she expresses her vision of imagined futures in which mutated subjects exist in dystopian worlds. Drawing deeply on the artistic traditions of her birthplace, Sri Lanka, and revelling in the pleasures of adornment and decoration, Perera has created a body of work that spans feminist and diasporic themes, while contemplating survival in an environmentally degraded future that is increasingly difficult to imagine. Her work responds to these threats with extraordinary creativity and invention, offering a vision charged with humour and sharp critique. Perera sees her works as expressing “a subversive aesthetic that counteracts antiquated, oppressive discourse,” asserting a “restorative force through which people can move outdated, repressive modes of being toward reclaiming their power.” The exhibition will gather works from all phases of Perera’s career and will include new works made specifically for her McMichael exhibition.

While women artists of the early twentieth century were known for their depictions of interior spaces as places of privacy and domestic quietude, Toronto artist Margaux Williamson’s (b. 1976) interiors reveal spaces of creativity, subjectivity, and anarchic experimentation. Williamson has a distinctive way of understanding and depicting space and her place within it, exploring the studio, the home and the bar in her paintings, as well as the sometimes fraught interior spaces of subjectivity.

Looking to the ability of art to illuminate the history of the land, the McMichael presents From Water to Water: A Way Through the Trees, a site-specific mural installation by Anishinaabe artist Bonnie Devine (b. 1952) in the Grand Hall Alcove. Devine and her assistant, Mariah Meawasige, conducted research on the Carrying Place Trail, which historically provided a connection for Indigenous people between the shore of Lake Ontario and the Lake Simcoe-Georgian Bay Region; the trail runs alongside the Humber River and through the lands upon which the McMichael is situated. Their research informed the design and content of the mural, leading to cultural discovery and diplomacy between different cultural stakeholders in the region. Inspired by the Gallery’s natural surroundings, this multi-media work combines painting with the display of Wendat ceremonial pipes excavated from nearby sites along the Humber River. The mural will remain on view in the McMichael’s Grand Hall Alcove for 18 months.

To commemorate the 100th anniversary of the Group of Seven’s first major exhibition, McMichael Executive Director Ian Dejardin dove deep into the Gallery’s extensive Group of Seven holdings to develop “A Like Vision”: The Group of Seven at 100. Originally opened on January 25, 2020, the exhibition features more than 280 artworks spanning five galleries, including beloved masterpieces by every member of the Group, as well as a selection of lesser-known pieces, such as a series of humorous sketches by Arthur Lismer, many depicting his fellow artists, and Lawren Harris’s Montreal River (c. 1920), the first work acquired by Robert and Signe McMichael in 1955. The accompanying exhibition catalogue, A Like Vision: The Group of Seven and Tom Thomson, was critically hailed as one of 2020’s most important Canadian art publications and features contributions from a number of Canadian artists, writers, and curators, including art historian Gerald McMaster, filmmaker Jennifer Baichwal, historian Charlotte Gray, environmentalist Wade Davis, painter Robert Houle, and Inuk writer Tarralik Duffy.

One of Canada’s most beloved artists, Tom Thomson (1877–1917) is often associated with the Group of Seven but was never a formal member. Prior to his tragic death in 1917, Thomson dazzled his fellow artists with the brilliance of his oil sketches—works that would become Canadian icons. This exhibition features the paintings that inspired the founding of the Group of Seven, altering the course of Canadian art forever, and will be accompanied by a multi-authored catalogue incorporating a range of cultural perspectives.

The Globe and Mail:  At the McMichael’s new exhibition Uninvited, Canada’s neglected female artists earn long-overdue exposure
National Post:  ‘A woman in a city’: What the Group of Seven lost in the northern woods
Galleries West:  Uninvited
Chatelaine: Go See 200 Gorgeous Works Of Art That Aren’t By The Group Of Seven

The McMichael Canadian Art Collection continues to adhere to Ontario public health guidelines and recommendations to keep our visitors and staff safe from COVID-19. For the most up-to-date information on the McMichael’s health and safety protocols, please visit mcmichael.com

The McMichael Canadian Art Collection is an agency of the Government of Ontario and acknowledges the support of the Ministry of Heritage, Sport, Tourism and Culture Industries, and the McMichael Canadian Art Foundation. It is the only major museum in the country devoted exclusively to Canadian art. In addition to touring exhibitions, the McMichael houses a permanent collection of more than 6,500 works by historic and contemporary Canadian artists, including Tom Thomson, the Group of Seven and their contemporaries, Indigenous artists and artists from the many diasporic communities. The Gallery is located on 100 acres of forested landscape and hiking trails at 10365 Islington Avenue, Kleinburg, north of Major Mackenzie Drive in the City of Vaughan. For more information, please visit mcmichael.com. 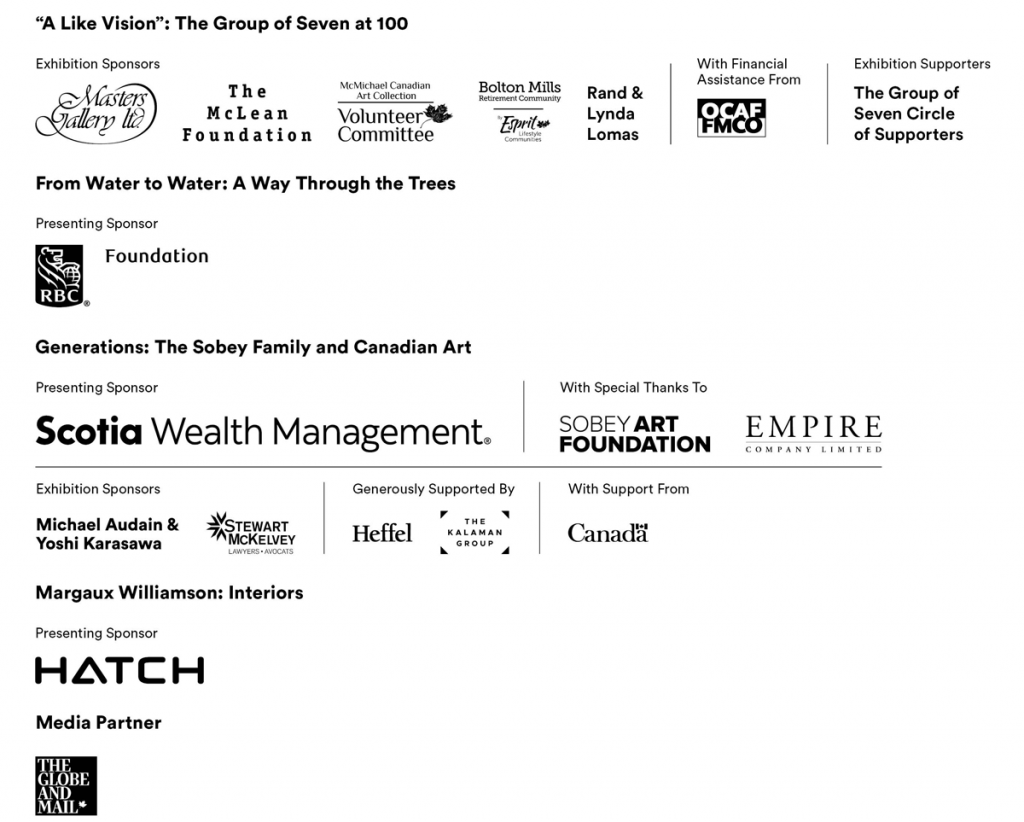