Louie Palu’s project provides a window onto the evolving perceived state of the militarization in the North American Arctic, documenting the vestigial legacies of the Cold War and the increased military presence in the north today. The changes in the region are exacerbated by the many unknowns the Arctic faces, among them the warming of the planet. Over several years — from 2015 to 2018 — what began as a Guggenheim Fellowship evolved into an assignment for National Geographic Magazine. Taken a whole, the series examines the growing geopolitical tensions and changing life around Inuit communities in one of the planets most extreme and challenging places. 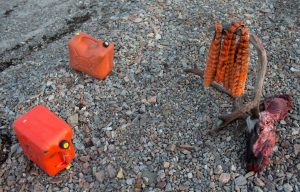 Louie Palu’s work was supported by funding from the John Simon Guggenheim Memorial Foundation, National Geographic Magazine and Pulitzer Center. This exhibition is part of the Scotiabank CONTACT Photography Festival and is sponsored by Blake Goldring and Canada Company: Many Ways to Serve.

Louie Palu (b. 1968, Toronto) is a documentary photographer and filmmaker whose work has examined socio-political issues such as human rights and war for 27 years. He is a Guggenheim Foundation Fellow and Harry Ransom Center Research Fellow. He has covered conflict in Afghanistan, Pakistan, Mexico and Ukraine. His work is held in numerous collections including the National Gallery of Art and Museum of Fine Arts Boston. His work has been published worldwide and has been featured on the BBC, and in Der Spiegel, El Pais, La Republica and The New York Times. His photographs and films have been exhibited in numerous museums and festivals including at the Smithsonian National Portrait Gallery and Munich Documentary Film Festival. He is currently working on a multi-year project on the Arctic with National Geographic.