“Histories,” located just down the hall from a large exhibition of works by another Manitoba painter, and Group of Seven member, Lionel LeMoine FitzGerald, has the air initially of an intervention. The placement of Robert Houle’s work, which for the artist had been fuelled by memories of abuse by administrators of the Sandy Bay Residential School, and the subsequent reintegration of his Indigenous spirituality in adulthood, presents an immediately palpable counter-narrative to that of the historic McMichael Canadian Art Collection, an institution traditionally concerned with regional representation, academic historicism and a marketable sense of Canadianness. Despite this positioning, however, Houle’s work shines in its ability to remain neither institutional nor anti-institutional. It highlights the multitudinous abuses of Canada’s residential school system as a matter of truth-telling, but its ultimate emphasis is on the individual capacity for affective transformation and pahgedenam—a Saulteaux word meaning, roughly, “letting it go from your mind” via spirituality and art. In Houle’s artistic vision, pahgedenam and other principles of Indigenous thought claim space alongside their Christian and settler Canadian counterparts to make reconciliation a concrete experience that may one day be genuinely shared. 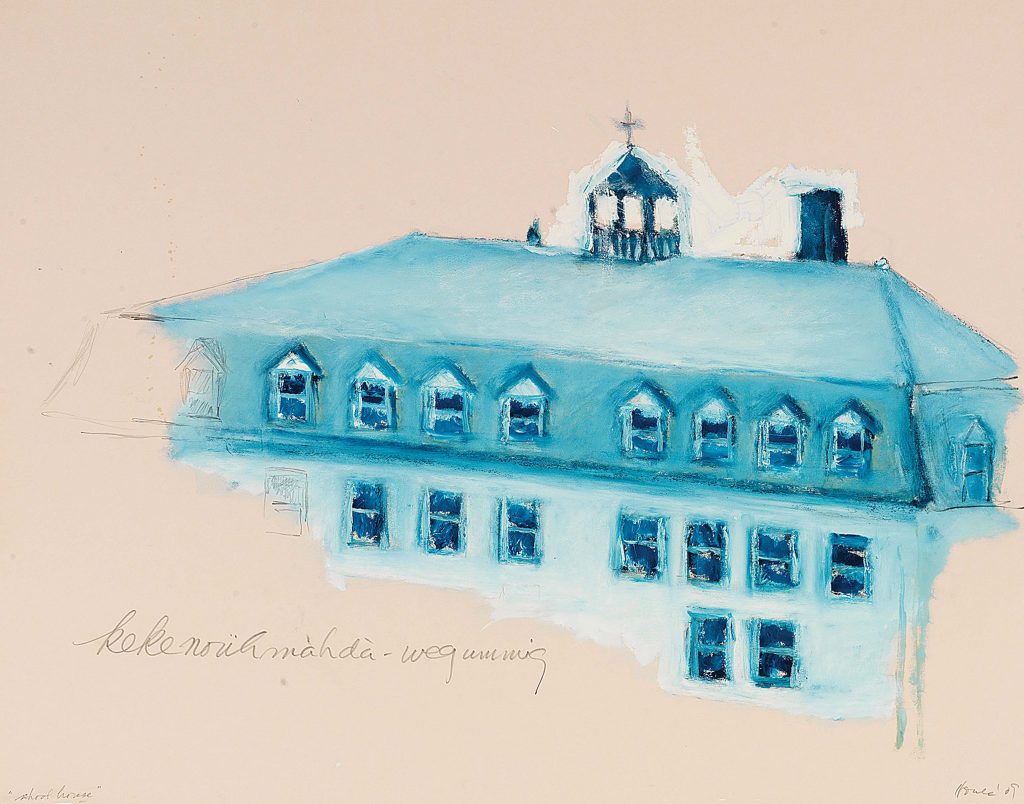 Although no single work is set at the centre of “Histories,” one of the exhibition’s most arresting inclusions is the “Sandy Bay Residential School Series,” 2009. Created over 24 consecutive days, the series’ 24 oilstick drawings capture the imagery and energy of Houle’s harrowing recollections of the spiritual, emotional, sexual and physical traumas he suffered as a child at residential school. As conduits of historical witnessing and effusive affect, the drawings are both exemplary of Houle’s deeply moving experience and deeply moving themselves. Much of their strength stems from their palpable diversity of gesture and linework, in which loosely drawn yet elegant architectural and atmospheric features underlie persistently rough, smudgy shadows and thick black outlines. The hasty application of the latter markings speaks to the ecstatic intensity of Houle’s most threatening remembrances, making them by far the series’ most prominent compositional elements. The drawings are also distinguished by their richly original language of colour: light teals, greys, whites and an earthy red mix with the brilliant baby blue of schoolhouse, 2009, which stands out as a safe harbour amidst the hostile strangeness of much of Houle’s past.

While the images that make up the “Sandy Bay Residential School Series” are pictorially recognizable and rooted in historical fact—as recounted by the short, poetic texts Houle wrote to accompany them— they exceed the formal structures of either visual or verbal language. Instead, their modes of expression are emergent in their making, along with being profoundly responsive to the non-linear process of healing a life lived and relived. The resulting entanglement of tones and contexts is evident in Houle’s repetition of a handful of typical scenes—a house, a row of beds, a bed with a cross— which he employs to elaborate memories reflecting a wide range of emotions. 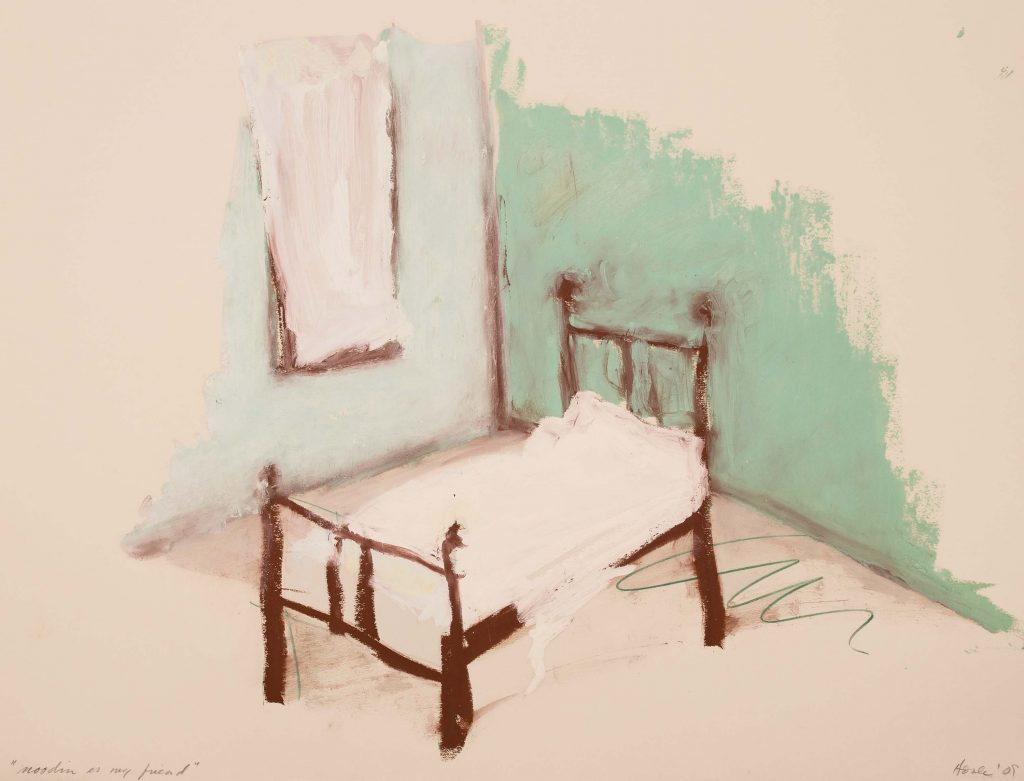 Insofar as it dovetails with intense affect, memory itself may be defined by this cycle of fixation and extemporization. There are obvious patterns and those patterns are autotelic, and therefore insoluble. Their overriding resistance to analysis is driven home by the three multimedia installations that fill out “Histories”: Sandy Bay Indian Residential School I, 2010–2011; III, 2012; and IV, 2012. In each of three separate locations, a light blue slatted wall drawing reminiscent of a bed, a dormitory railing or an architectural plan appears alongside vinyl lettering of the Saulteaux words for schoolhouse, praying, sleeping, waiting, person and lake, as well as canvases with similar titles in Saulteaux and English. These assemblages consistently mismatch and intermingle the channels of communication among visual, spoken and written languages: in Sandy Bay Indian Residential School I the text sets out labels for the paintings, while in IV it floats ambiguously between them, and in III some paintings even appear to be missing. The paintings themselves vary widely, with some incorporating handwritten words and representational sketches; others are featureless colour fields. Most, however, are highly abstract, improvised and striking in their tormented roughness. In depicting the seams or underbelly of Houle’s oilstick drawings, these works provide further insight into the at times nightmarish, at times otherworldy assemblage of sub- and super-conscious forces that have driven Houle’s lifelong process of remembering.

Endlessly complex in themselves, Houle’s explorations in the “Sandy Bay Residential School Series” and the Sandy Bay Indian Residential School installations ultimately bolster one of the predominant theses of his exhibition’s major works: that the techniques and principles of modern art constitute a means of spiritual (re)connection that cuts across Indigenous and settler identities. Houle’s expertise in deploying Euro-American painterly abstraction toward Indigenous understandings of self and world is perhaps best expressed in Blue Thunder, 2012, an abstract self-portrait bearing Houle’s birth name. Undergirded by the thunderbird’s characteristic X shape and culminating in an outburst of soulful blues and greys, the two-panel painting mines modernist aesthetics to both narrativize and activate the artist’s re-emerging Indigenous selfhood. The four large canvases collectively titled Muhnedobe uhyahyuk [Where the gods are present], 1989—which Houle painted to celebrate the taking up of Indigenous languages in settler Canadian place names—combine landscape painting’s attention to horizon and texture with geometric pictorial elements and bright, primary colour palettes reminiscent of abstract expressionism. The result is an immersive yet emphatically non-literal portrayal of the Manitoba wilderness, indicating that the divine aspects underlying the physical landscape can be translated and delivered to us through art.

In both traversing and dwelling in the interminable in-between of Indigenous and settler Canadian cultures, societies and spiritualities Houle offers both deeply unsettling acts of witness and triumphant achievements of clarity. Like the road that joined the residential school to his family home (which, according to the text accompanying the road home, 2009, Houle could see from his dormitory window), or the old mess hall mug Houle now uses for his morning coffee, the objects of memory highlighted in “Histories” are both distant and familiar, overwhelmingly dynamic and immovably raw. They are indelibly—and, in an important sense, irreconcilably—entangled with many of the darkest threads of Canadian statehood. Even so, the aesthetic power of Houle’s artwork insists that the affective energy and spiritual force of pahgedenam remains an attainable horizon for the people of his land.

“Robert Houle: Histories” was exhibited at the McMichael Canadian Art Collection, Toronto, from September 14, 2019, to February 23, 2020.

John Nyman is a poet, critic and scholar from Toronto.