The undaunted art market may have roared away during the second year of the pandemic but things moved quietly and cautiously in the museum world. Public art galleries in Canada reopened their doors in the summer offering much delayed touring exhibitions or shows hastily organized from their permanent collections.

Despite the postponements, cancellations and pivots, there was no shortage of wonder on display. Here are 10 of the best from 2021. 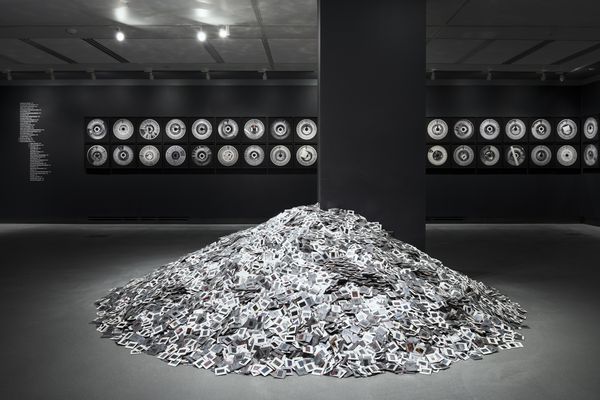 In Slide ｜ Lecture, a standout show at the Ryerson Image Centre, photographer Susan Dobson wrestled with the analogue: all those obsolete art history slides and the Eurocentric pedagogy they represented. Her pristine photographs recorded the round carousels, metal drawers and paper envelopes used to hold these vast collections, but she made her point most emphatically by depositing a large pile of discarded slides in the middle of the gallery floor. 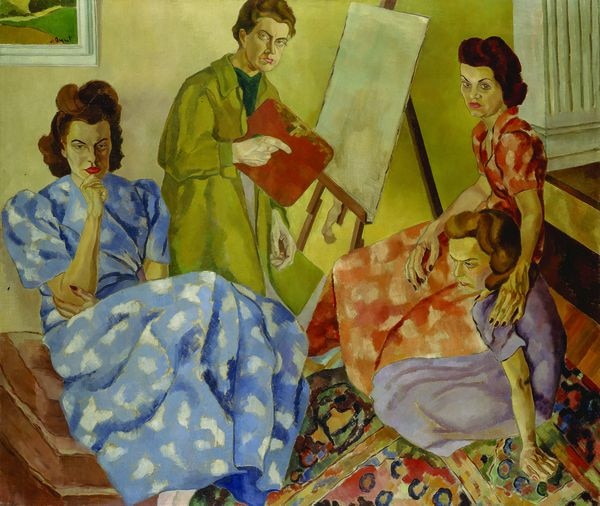 The McMichael Canadian Art Collection pulled off the year’s most important exercise in revisionism, Uninvited, an exhibition devoted to the Group of Seven’s neglected female contemporaries. One revelation was the tension between the women painters and the subjects of their portraits: no easy flattery or paternal condescension here. In 1941, Montreal art teacher Suzanne Duquet painted a family portrait (now in the collection of the Musée des Beaux Arts du Québec) showing herself as an androgenous professional surrounded by her hyper-feminine sisters, three women lost in depressive interiority despite their flouncy dresses and lacquered nails. 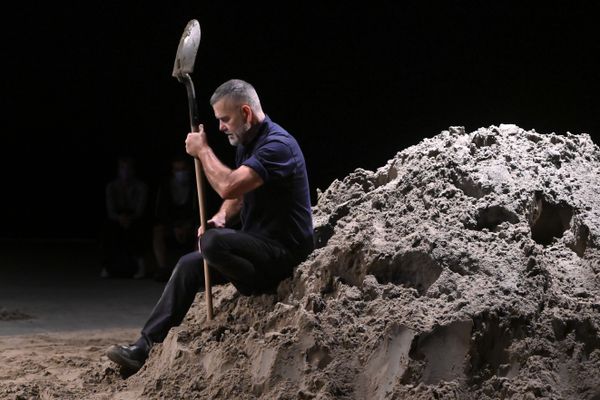 In October, at Montreal’s Olympic Stadium, performance artist Victor Pilon spent seven hours a day, six days a week moving 50 tonnes of sand from one pile to another. In these difficult times, the pointless task – a reference to the myth of Sisyphus doomed to push the rock uphill in perpetuity – became achingly poignant.

4. From 1848 to the Present by Moridja Kitenge Banza 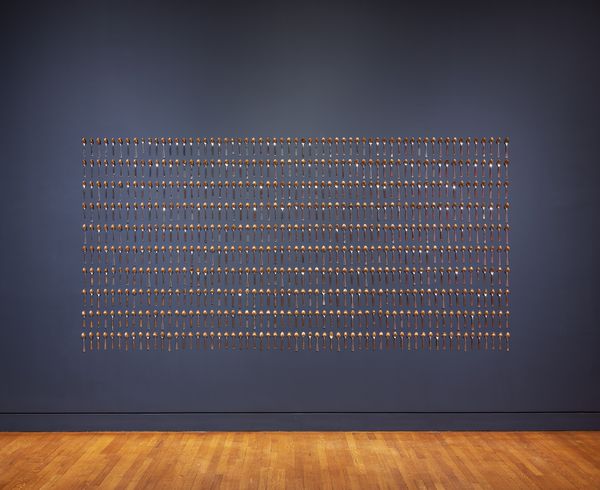 Moridja Kitenge Banza, From 1848 to the Present (silver and stainless steel), 2006–20.NATIONAL GALLERY OF CANADA

In the most hotly debated curatorial intervention of the year, the National Gallery of Canada introduced work by contemporary Indigenous and Black artists into its Rembrandt in Amsterdam show. Sometimes the postcolonial juxtapositions with the 17th-century master were forced; other times they were … stirring: Moridja Kitenge Banza, the Congolese-Canadian artist based in Montreal filled a wall with everyday teaspoons, which he acquired through barter, in a layered work about the trade of enslaved people. 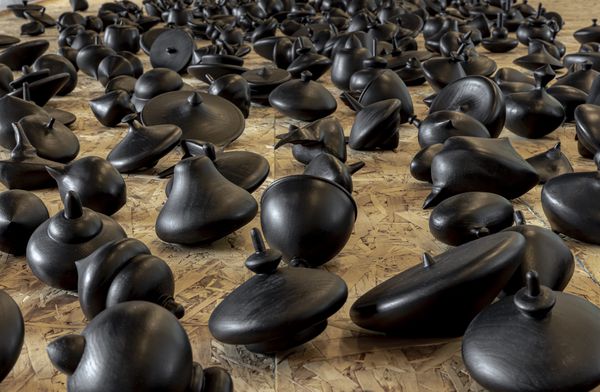 In the midst of the Greater Toronto Art 2021 show at the Museum of Contemporary Art, a delicate metaphor offered by a collection of misshapen spinning tops stood out. The Iranian-Canadian artist Ghazaleh Avarzamani created the designs for the oddly shaped wooden tops by sketching shadows cast by a single top but the grouping suggested a quiet celebration of humanity’s great diversity. Better yet, visitors could spin them if they liked. 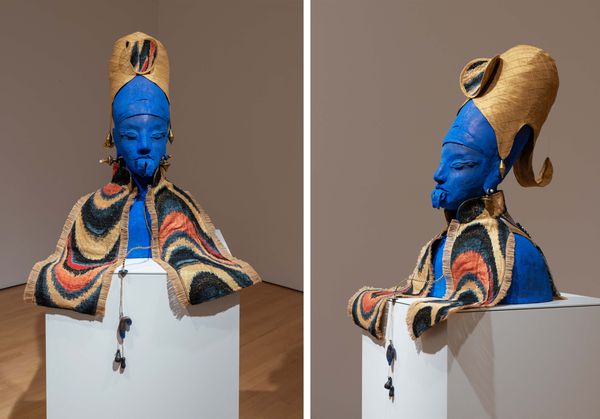 The Toronto artist and Sobey Award finalist Rajni Perera is known for colourful paintings of fantastical Eastern figures, as though Indian miniatures had been enlarged by an encounter with Star Wars. Her fantastical myths for a multicultural future became all the more intriguing when they took three-dimensional form in the Sobey finalists’ show at the National Gallery of Canada. There she displayed a bright blue female bust wearing a multicoloured scarf and high headdress, a provocative figure sticking out a long blue tongue.

7. For, In Your Tongue, I cannot Fit: 100 Jailed Poets by Shilpa Gupta 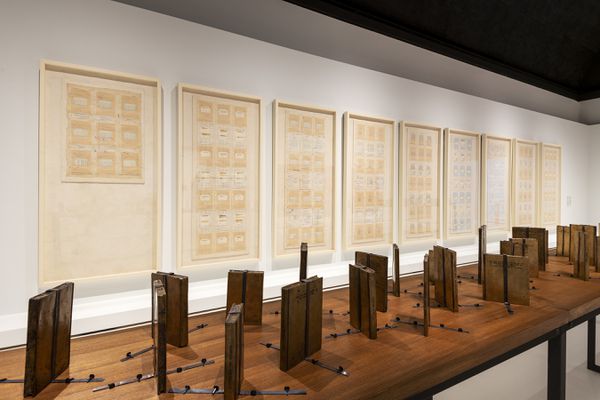 The show’s title (taken from a Betty Goodwin sculpture) was awkward but “How long does it take for one voice to reach another ?” provided an invigorating look at some recent acquisitions from the Montreal Museum of Fine Arts’ collection. One long gallery was divided down by the middle by a narrow table to which the Indian artist Shilpa Gupta had bolted 100 little metal sculptures of closed books. Each represented a poet jailed for writing – from different eras and 40 different countries including Nigeria, Pakistan, France and the United States. The museum acquired this powerfully physical retort to censorship in 2019.

8. Tightrope: In Boxes by Elias Sime

The Ethiopian artist Elias Sime accumulates discarded computer parts to create majestic abstracts that read as aerial views of landscapes and cities, creating tension between natural environments and electronic detritus. Tightrope: In Boxes was one of the highlights of his engrossing exhibition at the Royal Ontario Museum: brown and green motherboards might be a town; colourful squares of coiled wire suggested the fields beyond, the image evoking both our love of technology and a deceptively tame version of nature.

9. For Jimmy by Jeff Bierk 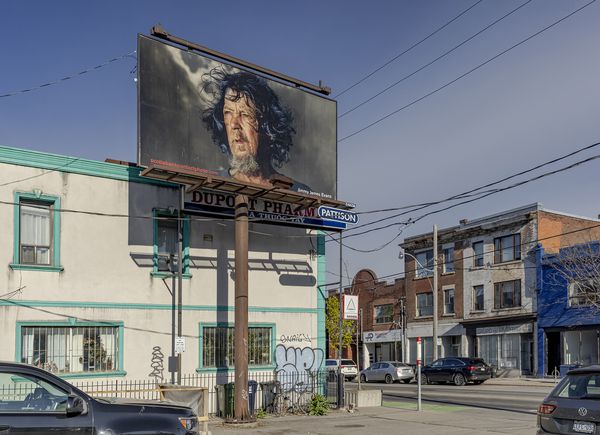 Toronto’s west end couldn’t miss Jimmy James Evans’ portrait when it appeared in May: The man’s head was featured on two billboards in the neighbourhood where he lives and panhandles. This was the weathered face of a hard life, yet the scale and Evans’s reflective look gave the portraits, posed against a dramatic sky, a heroic dignity. Part of the annual CONTACT festival, the billboards were the work of photographer Jeff Bierk, who has collaborated with Evans over the years in a project questioning consent in street photography. 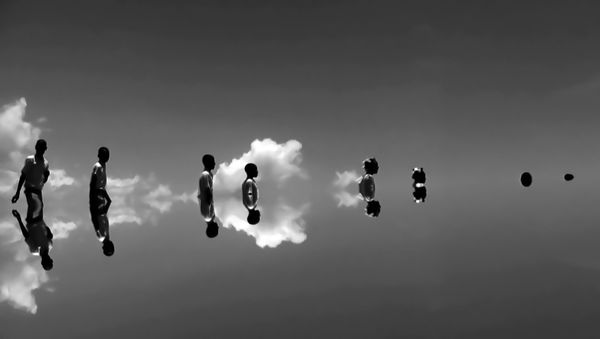 The Fragments of Memory show at the Art Gallery of Ontario was filled with big, impressive works of contemporary art by the Caribbean diaspora and Black Bullets was one to stop viewers in their tracks. Created by the Trinidadian-Danish artist Jeannette Ehlers in 2012, it featured a giant video panel playing a four-minute loop that shows a line of Black school children reflected in clouds. As they walked across the sky, they merged into their mirror images until they disappeared, as though sinking from sight in deepening water. It was a haunting image confronting the viewer with the tragic disposability of young Black lives.

Email
The McMichael is temporarily closed as per the province-wide efforts to mitigate and prevent the spread of COVID-19.
For more information, click here. We are planning to reopen on Tuesday, February 1. Stay tuned for details.