Skip to content
Previous Next
The Idiosyncratic Paintings of Maud Lewis, a Beloved Canadian Folk Artist

KLEINBURG, Ontario — From her tiny cabin in rural Nova Scotia, the Canadian folk artist Maud Lewis painted exuberant country scenes onto particleboard, wallpaper, dustpans, or just about any flat surface she could find. She often returned to subjects that seemed to strike a chord with customers who purchased her paintings for just a few dollars: long-lashed oxen, wide-eyed cats, boats idling in the harbor. But a new exhibition of 120 of Lewis’s artworks at the McMichael Canadian Art Collection proves that she did not churn out these pieces by rote; the show highlights her inventiveness, humor, and the delightful quirks of her artistry.

Lewis’s iconic cat paintings, seven of which are displayed side-by-side at the McMichael, offer a prime example of the breadth of her creativity. While her feline subjects often sit on green grass, surrounded by tulips, and crowned with blossoming branches, no two paintings are identical. Some cats are white, others black, still others are black-and-white. They appear alone, or grouped into clusters of three — typically, one large, two small. Vibrant tulips might burst into the foreground or delicately snake around the animals. Usually, the cats look mildly stunned, but in one rather curious painting (“White Cat,” 1965/66), a fluffy feline stares out at the viewer with grumpy eyes, its mouth pulled into a frown. 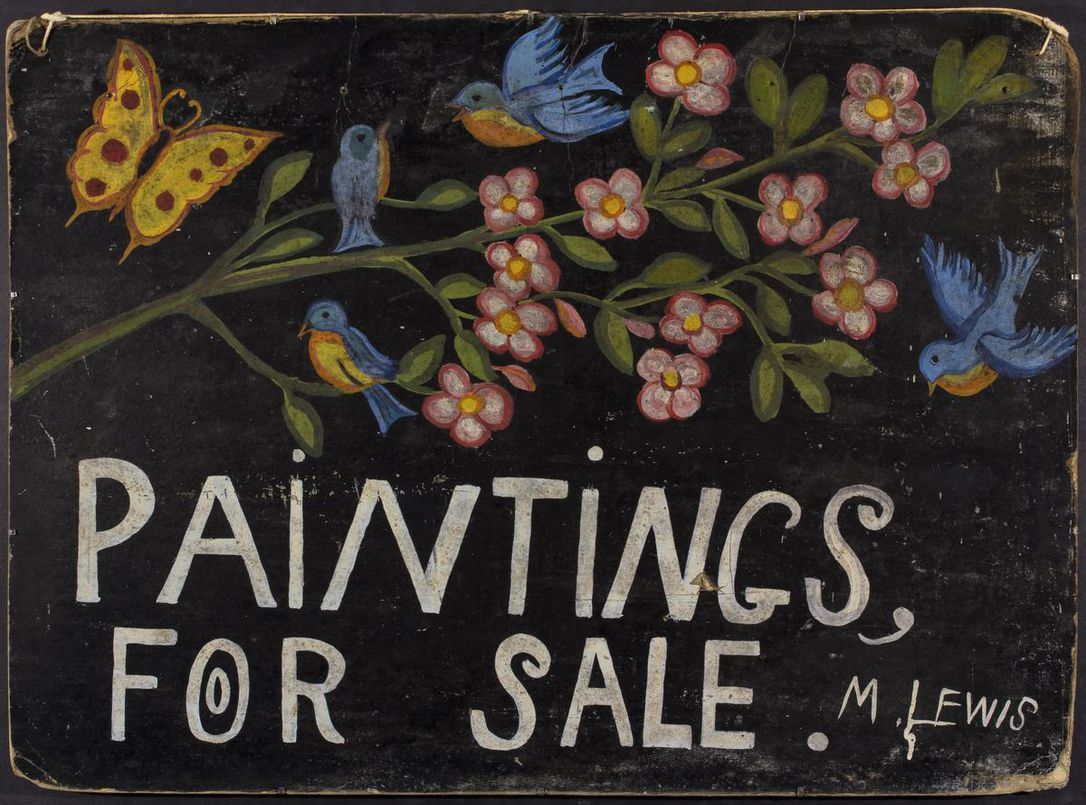 “A cynic might say, ‘Well, she’s just redoing the same thing over and over,’” Jennifer Withrow, head of exhibitions and publications at the McMichael, said in an interview. “But it’s really not the same thing. Why put a frown on a cat unless you want to sort of see what it looks like? I think there’s an earnest and playful creativity that’s behind every cat painting.”

With Maud Lewis, the McMichael encourages a nuanced appreciation for an artist whose work has long been attached to reductive descriptors like “child-like” and “primitive.” The gallery is home to a robust collection of Canadian artworks, including some 2,000 works by members of the Group of Seven, arguably the country’s most iconic artists. Lewis may have operated on, or even outside of, the fringes of the art world, but the McMichael believes she deserves a place within its halls.

“Maud Lewis is outside the cannon of artists that we associate with the story of art in Canada,” Withrow says. “And yet I think she’s a very worthy subject for an art exhibition, especially when we are reckoning with what made the canon in the first place, and what kind of advantages got you a spot as a revered artist … Maud Lewis certainly had no advantages. And yet she made a place for herself with the sheer force of her creativity. That’s really something.” 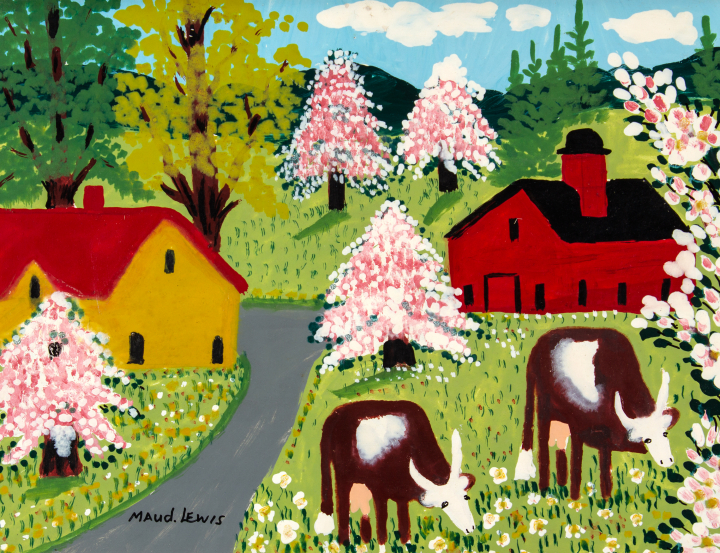 Lewis worked in obscurity for many years, only garnering widespread recognition shortly before she died, thanks to a 1965 newspaper article and subsequent CBC documentary about her life and work. She has remained one of Canada’s most beloved folk artists; Maudie, a 2017 biopic starring Sally Hawkins and Ethan Hawke, gave her a recent boost in popularity. Today, a Maud Lewis painting might sell for upwards of $20,000, a price that was likely unfathomable to the artist in her lifetime.

Born Maud Dowley in 1903 in the town of Yarmouth, Nova Scotia, Lewis suffered from juvenile arthritis that eventually bowed her spine, stiffened her neck, and gnarled her hands. She left school at 14 (possibly to escape her peers’ teasing), but her home life was pleasant. She and her mother would paint Christmas cards together and sell them door-to-door. Her father worked as a harness maker and blacksmith, and references to his vocations crop up frequently in her paintings. The world around her was quickly modernizing, but her rural scenes are populated with working animals and horse-drawn carriages. 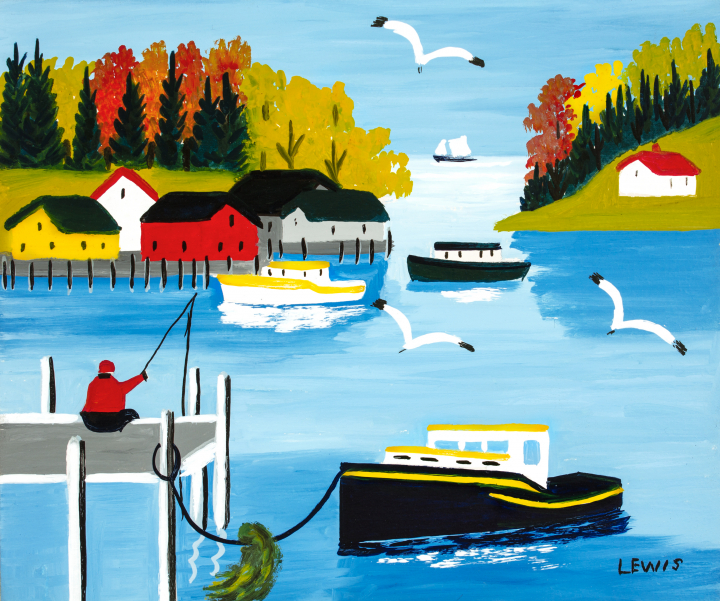 In 1928, Lewis gave birth to a baby girl out of wedlock and the child was swiftly placed with an adoptive family. Further blows came in the 1930s, when both her parents died within a span of two years. Soon after, she answered a newspaper ad for a housekeeper placed by Everett Lewis, a local fish peddler. They married in 1938 and spent the rest of their years together in Everett’s one-room cabin, without running water or electricity. Everett cut boards for Maud’s art, haggled with her customers, and took care of household chores so she could paint — which she did with gusto, covering the couple’s tiny home with tulips, birds, and butterflies. But he also purportedly ferreted away Maud’s earnings, hiding the money in jars that he buried in their garden. Maud lived in isolation and deprivation until her final days, succumbing to pneumonia in 1970.

Discussions about Lewis often center on her remarkable biography; in the face of chronic pain and persistent hardships, she found beauty in her world. But the exhibition doesn’t dwell on Lewis’s history. Instead, it focuses on her recurring but creative use of various motifs and techniques. The show is organized by theme (for instance, seaside paintings, animal works, and holiday scenes), allowing the range of her oeuvre to shine through. 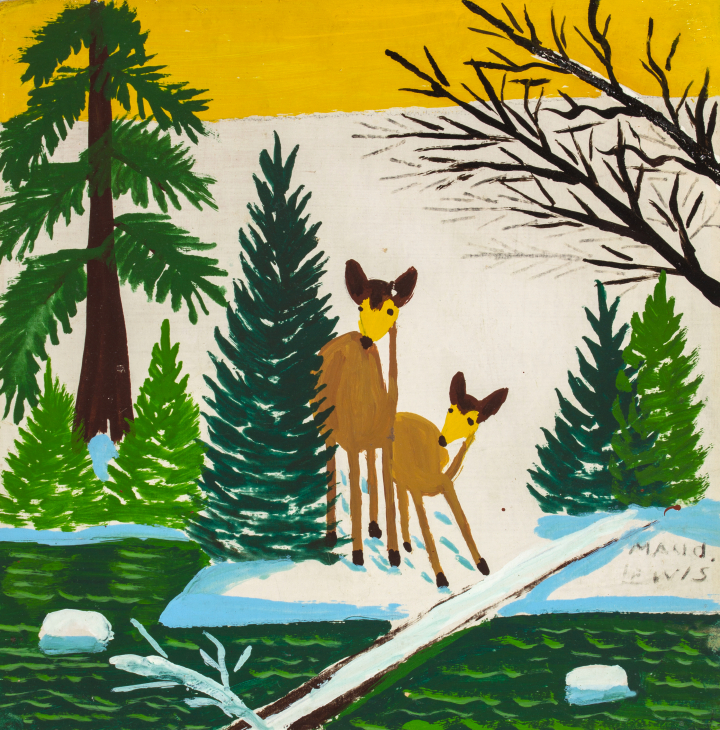 Seasonal changes play an important role in Lewis’s paintings. In one work (“Two Deer in Snow,” ca. 1960s), a deer and its fawn peer out from behind a stunted evergreen in a field of pearly snow, a bare, spindly tree hovering in the foreground. Still tucked behind an evergreen, the animals are transplanted into a second work (“Deer and Fawn,” 1964), this time in an autumnal landscape enlivened by red, yellow, and orange foliage.

Yet Lewis wasn’t rigid in her depictions of the seasons; she toyed with nature, sometimes popping colorful autumn trees into winter landscapes or covering evergreens in cherry blossoms — a charming Lewis idiosyncrasy.

She worked with a bold, basic palette. “[M]ost of these colors are straight out of the tube,” Withrow explained. But the effect is never cacophonous; Lewis  “created harmony in space through riotous contrast.” Red, pink, and orange houses rise up from bright white snow, while turquoise and yellow boats loll in brilliant blue waters. The exhibition also features striking experiments with color, such as a commissioned set of shutters with winter and summer themes. The shutters’ black backgrounds are a significant departure for Lewis, and make her chubby-cheeked snowmen and blooming flora appear all the more vibrant. 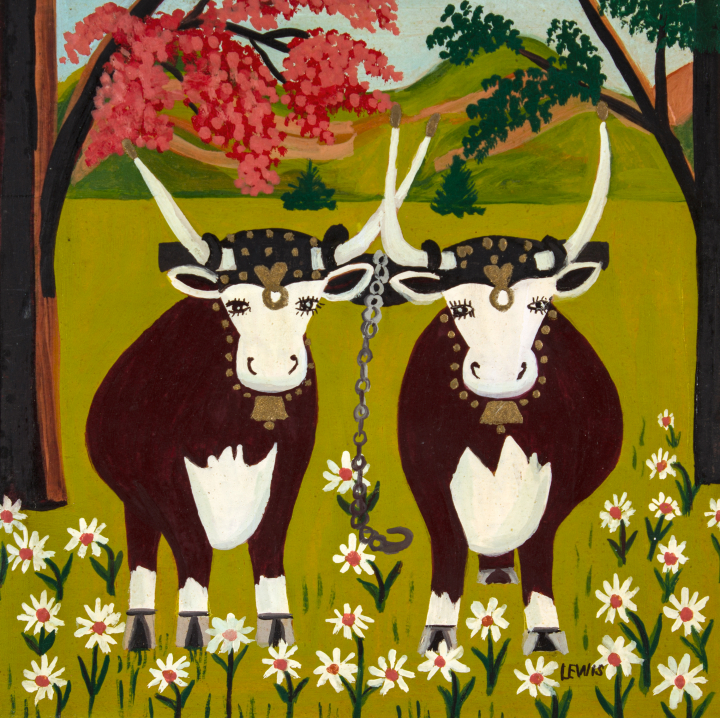 Also painted on a black background is the famous “Paintings for Sale” sign that opens the exhibition; it originally hung outside the Lewises’ roadside home, where it could entice customers. Lewis rendered the lettering in stark white, and adorned the sign with a flowering tree branch surrounded by brightly colored birds and a yellow butterfly. It is little wonder that drivers pulled over to check out her wares. She knew how to catch the eye.

Lewis’s work projects a sense of sincerity, an “incredible earnestness in her relationship with her subject,” as Withrow puts it. After all, Lewis painted largely from memory. “Because I don’t go nowhere … I just have to make my own designs up,” the artist herself once said. To view her work is therefore to take a jaunt through her imagination, where autumn trees grow in winter, horse-drawn buggies roll down country roads, and bucolic landscapes are electrified with color and an infectious sense of joy. 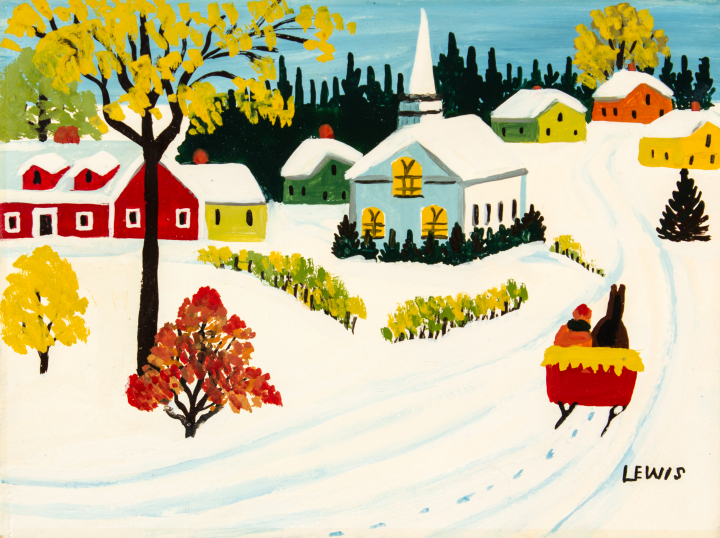